Inside the US Open: Five Brands That Scored With Tennis Fans 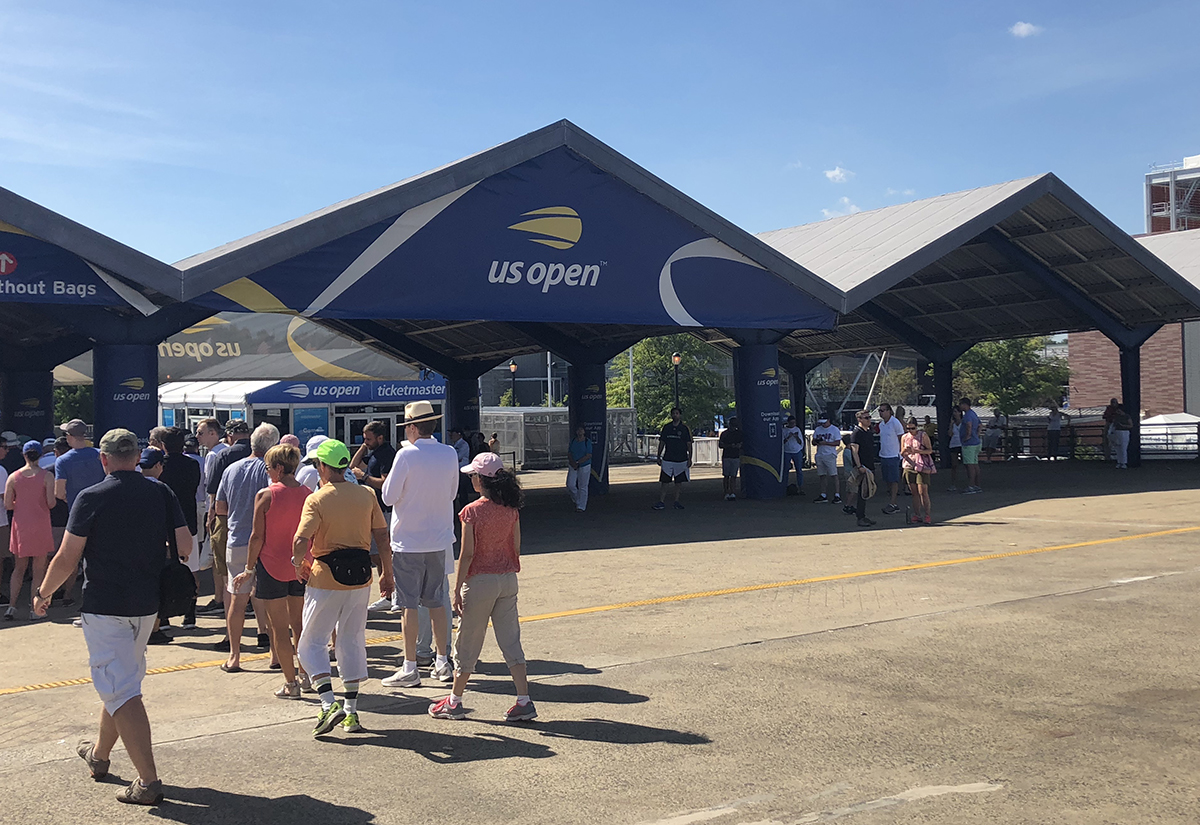 Inside the US Open: Five Brands That Scored With Tennis Fans

More than 700,000 tennis fans descend on the Billie Jean King National Tennis Center each year for the US Open, and this year, EM was among them. Held Aug. 27 through Sept. 9 in Queens, NY, the USTA’s renowned tournament marked its 50th anniversary by offering attendees nostalgic exhibits, like the Moments of Glory booth, where fans could broadcast their own play-by-play of historic matches, then share them on social media. But the brands came out to play, too, often battling temperatures that hovered near 100 degrees (leading to the Open’s first-ever implementation of an Extreme Heat Policy) to engage the tournament’s passionate fan base. So grab your signature Honey Deuce cocktail and take a spin with us through this year’s top sponsor activations. (And stay tuned for our full coverage of the American Express Experience at this year’s Open.)

Marking its 37th year as a US Open sponsor, Chase offered an array of on-site engagements in addition to working with the USTA to restore tennis courts in five cities. Fans could participate in photo opportunities with US Open trophies, borrow a live-video mobile charger that simultaneously charged their phones while offering a live feed of the day’s matches and answer a single question on a “magic ATM,” which then dispensed a free prize (we got a PopSocket and a pocket fan). There were also real ATM machines enveloped by oversized tennis balls for attendees who needed some fast cash.

In addition, Chase customers who purchased tickets to select US Open sessions could reserve a spot in the Chase lounge, where drinks and snacks were available, along with plenty of screens featuring tournament matches. Agency: InnerCircle, Columbus, OH.

Emirates, the official airline of the US Open, kicked off its sponsorship by providing flights from 160 destinations to New York for the duration of the tournament, along with live, in-flight coverage of each match. At the brand’s booth, attendees could win seat cushions, hang out in a designated chill space featuring a globe installation displaying the airline’s global destinations and participate in a Dubai-themed photo op that, when shared on social using #EmiratesAce, gave attendees a chance to win a free trip. Rounding out the sponsorship were the Emirates Sports Café, where all ticketholders could grab a bite and relax, and surprise seat upgrades awarded to random fans. 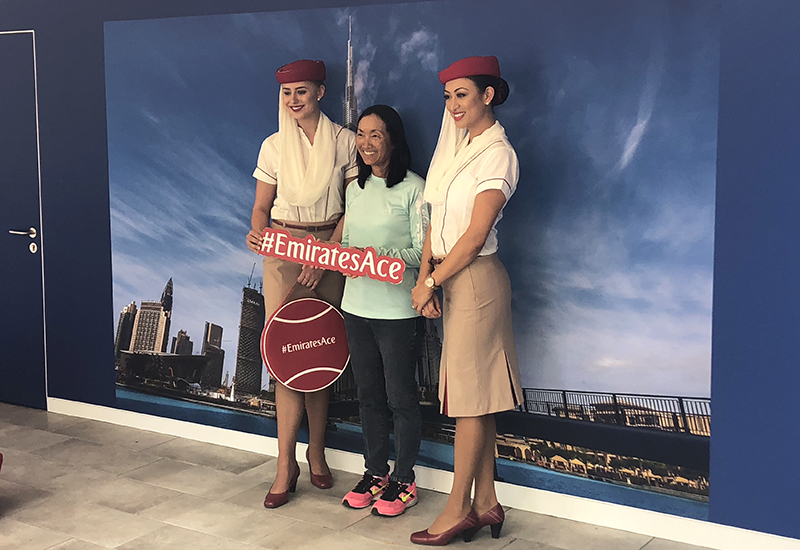 Fans could participate in a Dubai-themed photo op that, when shared on social media, gave them a chance to snag a free trip. 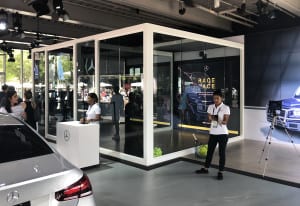 As the official vehicle of the US Open, Mercedes-Benz’s presence on the tournament grounds couldn’t be missed. The brand launched its sponsorship with a social media-driven scavenger hunt around New York City, where branded tennis balls were hidden alongside a 2019 Mercedes-Benz G-Class. From Aug. 27-30, fans could check the automaker’s Instagram account to receive clues delivered by US Open champion and global brand ambassador Sloane Stephens on where to find the vehicle. Those who located the vehicle and its accompanying tennis ball earned a ticket to Mercedes’ VIP suite inside Arthur Ashe Stadium, where they could enjoy some of the most exclusive seats in the tournament, along with a lounge and outdoor seating, and a mix of food and beverage options.

We weren’t lucky enough to score a spot inside the suite, but we did get a chance to participate in digital tennis games played with real racquets and tennis balls at the Mercedes-Benz Brand Center. After signing up on a tablet, we got a chance to choose from four different 90-second “Race to Ace” games, then played them inside glass-encased spaces where fellow attendees could look on. Top scores were displayed on a nearby leader board (our names, sadly, did not appear), while those interested in Mercedes’ vehicles could check out an array of on-site models. A photo op featuring a backdrop of Stephens beside a Mercedes vehicle was also offered.

At another branded location, fans could snap photos with a larger-than-life, branded tennis ball or pose in front of a New York City skyline installation comprised of tennis balls. Attendees could also sit inside a handful of cars and learn about the materials used in Mercedes vehicles.

Bonus: Attendees who arrived at the US Open in a Mercedes vehicle received free parking. We were not among them. Sigh. Agency: Engine Shop, New York City.

Best known as the official ball of the US Open for the last 40 years, Wilson offered fan engagements at its on-site retail store. Like the opportunity to watch official stringers work on top players’ racquets. Attendees could also view projection-mapped logos powered by Epson technology on the store’s famous jumbo tennis balls. And on a nearby wall, shoppers could view projection-mapped content featuring pro tennis players. Agency: All Of It Now, San Francisco. 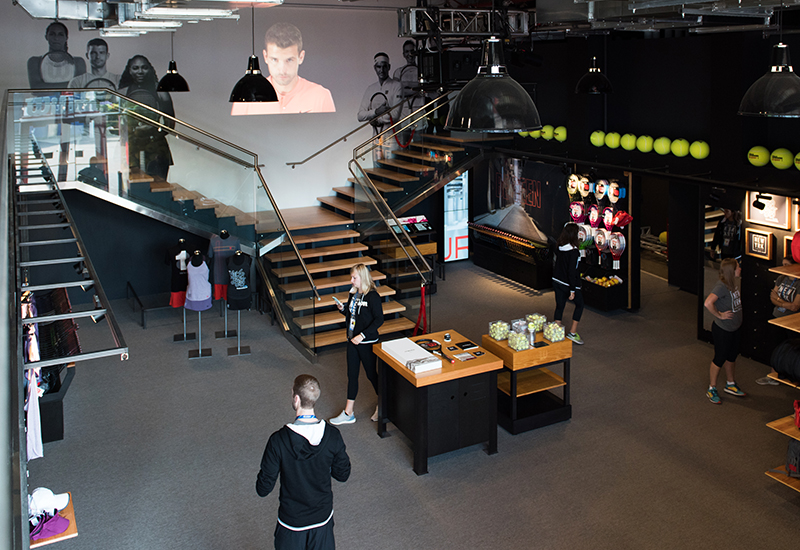 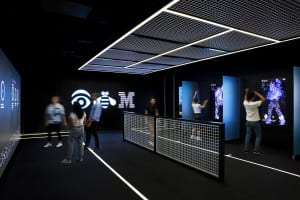 The IBM Experience introduced more than 7,000 fans to the technology that powers the digital components of the US Open, including showcasing the capabilities of Watson, its artificial intelligence engine. Watson fueled an “AI Highlights” engagement, for instance, which we happily participated in. During the experience, attendees stepped in front of one of three screens and, with the help of a brand ambassador, tested Watson’s ability to recognize the sights and sounds of various sports while creating their own shareable AI Highlight in the process.

For the first time, fans could also get a taste of how IBM assists USTA coaches and players by providing them with a comprehensive database of match videos. With the help of Watson, they were able to review hours of footage then identify and catalog key points and stats within minutes. The technology was also used to identify and deliver the tournament’s most exciting moments to fans, including in-game analysis and enhanced video highlights.

The brand also served up the IBM SlamTracker, a data analytics application that offers fans exclusive access to live dashboards of all matches in progress, and delivers insights from 12 years of data that includes 6,350 matches, 946,759 points, and real-time match stats.

Watch: IBM and the USTA Team up to Evolve the US Open fan experience