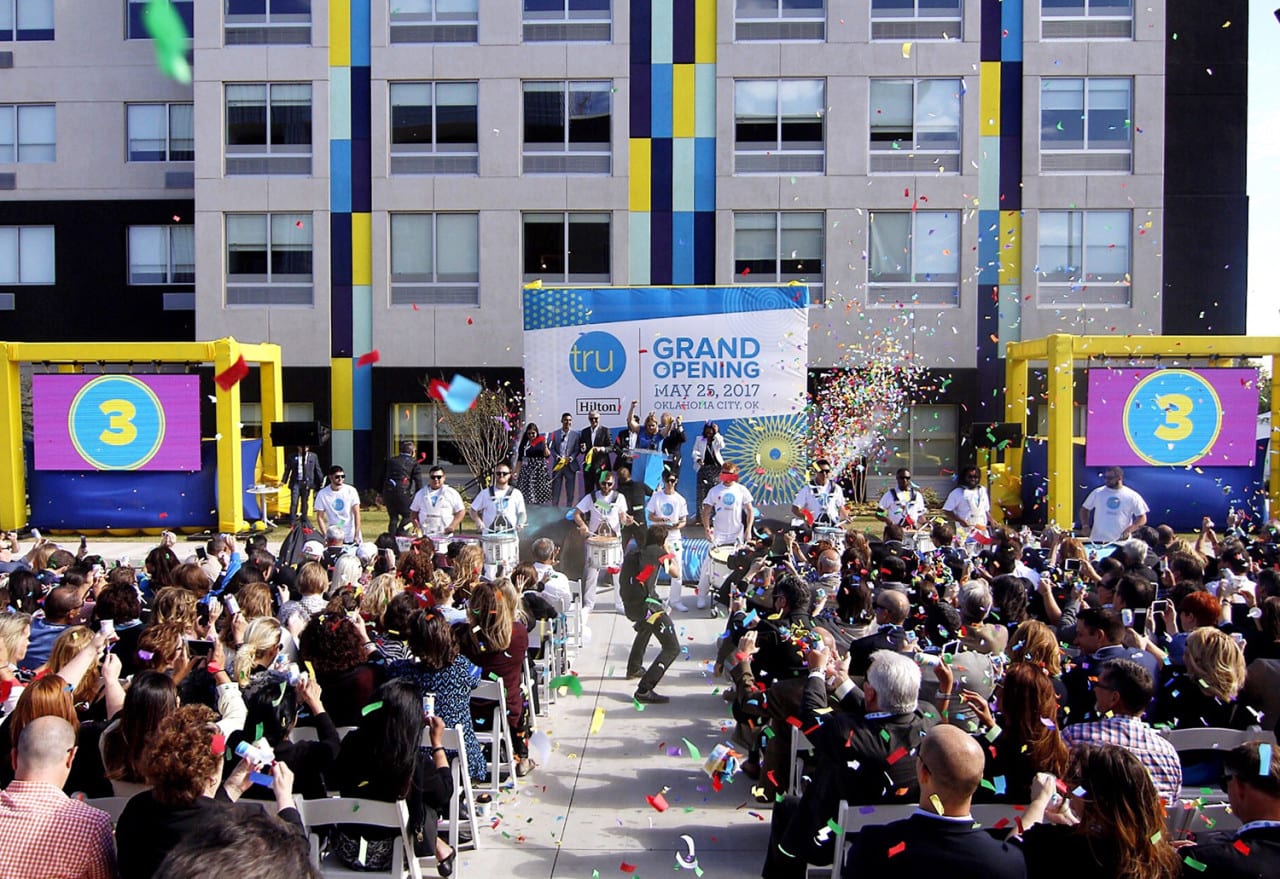 Wrapping up a year-long launch campaign, Tru by Hilton, the new midscale brand of Hilton Hotels & Resorts, celebrated the grand opening of its first location in Oklahoma City, OK, with a community-driven program that packed a playful punch. Held on May 25, the event attracted key stakeholders within the company and the market including Christopher Nassetta, Hilton ceo, Alexandra Jaritz, global head of Tru by Hilton, and Oklahoma City Mayor Mick Cornett. It also marked Hilton’s 5,000th hotel opening.

To kick off the celebration, Hilton conducted a grassroots campaign throughout Oklahoma City that brought the “playful” Tru brand messaging to life. Brand ambassadors carried oversized Tru by Hilton-branded frames for folks to snap photos behind as a swag truck followed. The street teams visited area 5K runs, the Botanical Gardens, a food truck festival and other local stops, handing out branded premiums ranging from water bottles to gift certificates. In addition, Tru partnered with One World Play Project and Boys & Girls Club of America and, the day before the grand opening ceremony, children from the Boys & Girls Club of America received donated Tru-branded ultra-durable One World Futbals.

For the grand opening ceremony, 56-foot-tall colorful ribbons were hung from the Tru by Hilton hotel building in Oklahoma City, which served as the backdrop to the experience. The stage presentation featured “disruptive” moments, ranging from blow-up balls featuring brand keywords and messages tossed amongst the audience, to drummers, and confetti-filled balloons and guns that sent colorful strands into the seats. The ceremony was captured on Facebook Live, a first for Hilton. A reception captured the essence of Tru and how the property is catering to millennials with its “The Hive” lounges for meetups and “Play Zone” spaces with stadium-seating around big-screen TVs and table games.

Of course, all of this preceded the campaign that included a dramatic reveal at the 2016 Americas Lodging Investment Summit (ALIS) featuring NBC’s “The Voice” runner-up Jacquie Lee, plus, digital mapping and motion graphics, and a nearly-to-scale buildout of Tru’s lobby. Ten brand launch activations at industry conferences, trade shows and owner advisory meetings followed, as well as a whisper campaign that included collateral and branded sticker drops and playful popsicles distributed by stream teams throughout Phoenix, one city in negotiations for a Tru hotel.

The campaign generated 1.3 billion impressions, including 414,000 social posts in the first week. It also received more than 1,300 media placements, including 494 Associated Press pickups and 255 total broadcast pickups. To date, more than 300 hotel deals for Tru by Hilton are in process.

“Our target consumer we say is an individual that has the millennial mindset, and I know that’s a very overused marketing term, but it’s really individuals that share the value of connection and who want things delivered in refreshing ways, so we think that Tru is a differentiator in what those consumers are looking out for and we wanted that to be reflected in the experiences throughout the campaign,” says Tripp McLaughlin, senior director-Tru brand management, Hilton. Agency: agencyEA, Chicago.