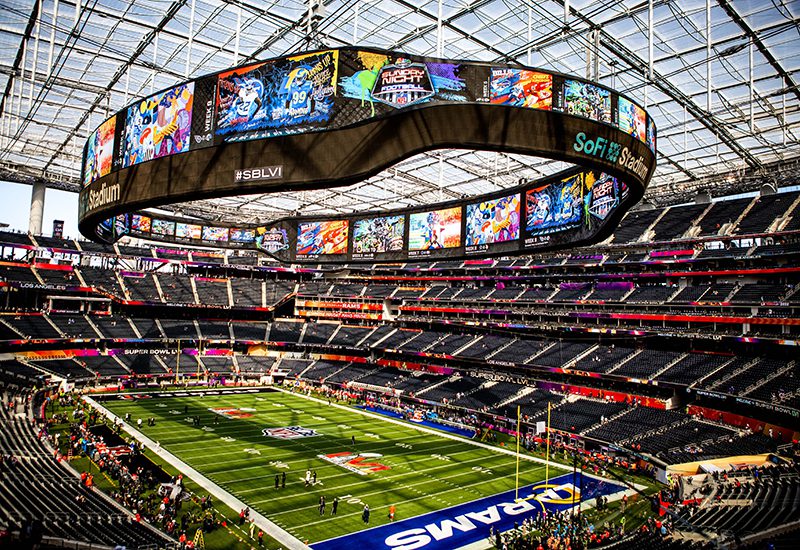 The competition was fierce over the weekend—and only the strong survived.

No, we’re not talking about the killer matchup between the Los Angeles Rams and the Cincinnati Bengals for Super Bowl LVI on Feb. 13. We’re talking about the battle of the brands that took place in the leadup to the big game between official sponsors and those riding the hype train, alike. In addition to viewing the biggest U.S. sporting event of the year and a Pepsi Halftime Show that made (millennial) hearts flutter, fans could participate in a range of in-person brand activations. And after a bleak Super Bowl LV in which attendance was capped and many sponsors withdrew from activating in person, the live experiences that cropped up around this year’s game signaled a potential for brighter days ahead.

In a rare turn of events, the competition took place on the Rams’ home turf at So-Fi Stadium (home to the largest videoboard in sports) in Inglewood, CA, making it the second year in a row that one of the competing Super Bowl teams had the home field advantage. As for the brands, it was a fairly even playing field, whether they activated at the official Super Bowl Experience Presented by Lowe’s at the Los Angeles Convention Center, around L.A. or in another location altogether. Now, crack open a cold one and join us for a roundup of the Super Bowl LVI events and experiences that scored with fans in L.A. and around the country. (Be sure to check back for updated coverage throughout the week.)

Subway offered a very literal interpretation of what a “signature sandwich” is for the big game. The brand recruited some of the hottest stars in football to sign their names to their own signature Subway sandwich creations—in edible ink. Fans could enter the Subway “Vault” at the Los Angeles Convention Center for an opportunity to meet superstars like Russell Wilson, Marshawn Lynch and Trevor Lawrence as they hand-signed their own limited-edition signature subs (To eat, or to keep? That is the question.). In addition to the edible autographs, visitors could participate in a multisensory, a/v “ride” through the flavors of Subway’s Signature Sandwiches, which was narrated by Lynch. (Agency: Momentum Worldwide)

During the regular season, NBC reignited fans’ passion for its “Sunday Night Football” programming with a series of live painting events powered by local artists in six markets. Dubbed canVS, the campaign was designed to culminate in a 100-yard-long mural inspired by fan contributions, and slated to be revealed at Super Bowl LVI. On Sunday, the season-long dream became a reality.

Here’s how it worked: for each “Sunday Night Football” matchup this season, a local artist (or collective of artists) in the host city created a five-yard-long mural. The artwork was developed with the input of fans, who were encouraged to submit a word or phrase on a microsite that best represented one of the teams playing in that week’s game, like a favorite local food, landmark or player nickname. The phrases were aggregated in a word cloud, and some of the participants’ key words were visually incorporated into the mural. Former NFL tight end and accomplished artist Vernon Davis served as the host of the program, announcing which hashtags fans needed to use to submit their ideas each week across his social channels. Artists had around six hours to complete their paintings. As they worked, they could intermittently check an adjacent screen to see what words and phrases were populating in the word cloud, and draw design inspiration from them.

On the day of the big game at So-Fi Stadium, from 11 a.m. to 3 p.m., NBC Sports and its partners were on-site completing the last piece of the fan-inspired mural with a live painting event. The full artwork was then revealed, including being prominently featured on So-Fi Stadium’s massive videoboard (check it out in this article’s featured photo). (Agency: X-FCTR.) 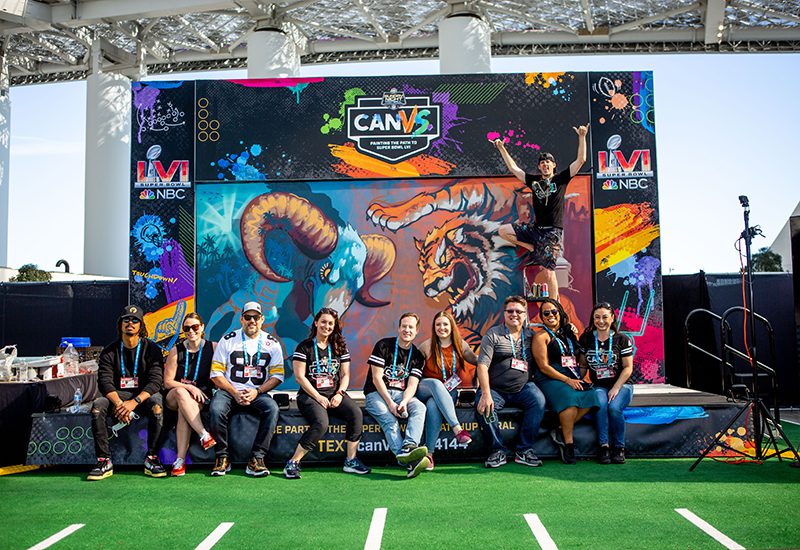 A recent study showed that ninety-eight percent of football fans are fortunate enough to have the day off from work on Super Bowl Sunday, but Smirnoff took a no-fan-left-behind attitude this year and addressed the other two percent. Welcome to the “Last Frontier,” a Super Bowl LVI Watch Party located in a remote part of Alaska, 100 miles north of Anchorage. The event was built for a group of hard-working gold miners that didn’t have access to the Super Bowl given their remote location. So on gameday, Smirnoff was waiting at the crew’s snow-covered base camp to throw an unparalleled Super Bowl LVI watch party. To add to the excitement, NFL legend Vernon Davis surprised the unsuspecting miners with a one-of-a-kind virtual invitation to the party in the days leading up to the game. (Agency: Taylor Strategy)

Experiences are at the core of Groupon’s platform, so it only makes sense that the brand created an experiential Super Bowl LVI campaign to call attention to its offerings. The company teamed up with NFL tight end Rob “Gronk” Gronkowski for a “Party Like a Player” activation that took place at Gronk’s Massachusetts mansion. While the player was away on Feb. 13, Groupon gave one contest winner and 15 of their friends a once-in-a-lifetime stay at Gronk’s 4,486 square-foot home in Foxborough. The grand-prize winner and their guests were first flown to Boston and received two nights of hotel accommodations. Then, on gameday, they were transported from the hotel to Gronk’s house for an experience that included beer and wine tastings, an indoor bounce house, mini golf, axe-throwing and a hot stone massage station. For those who didn’t score the brand prize, Groupon offered other “baller” prizes, like a trip to Las Vegas, a VIP Harlem Globetrotters experience and a pair of custom-designed kicks by Groupon x Stadium Custom Kicks.

To tout its new Exfoliating Bar razor, Gillette hosted an outdoor roller-skating rink activation in Santa Monica, CA, Feb. 11-12. The brand not only leaned into L.A.’s skating culture, but simultaneously highlighted how “effortlessly easy” it is to use its new product through the experience. In addition to the rink, the activation featured a live dj, guest appearances from well-known athletes and influencers that were local to L.A. and the skate community, photo ops and a pop-up barber shop featuring celebrity barbers from the Gillette Barber Counsel.

Electric vehicles were a dominating force among this year’s Super Bowl ads, but Ford charged up fans in person at the L.A. Convention Center with its #FordElectrifiedTailgate experience. With its new all-electric 2022 F-150 Lightning model as the centerpiece, Ford illustrated how all of a sports fan’s tailgating needs can be powered by the electric truck (think: everything from a TV and audio system, to an electric grill and gaming system). The brand also offered fans a chance to show off their best touchdown dance for the Electrifying End Zone Celebration, win a branded giveaway in the Rally Tally Vehicle Discovery Hunt, make a fan card and snap once-in-a-lifetime pics with NFL players and Pro Football Hall of Famers.

I’m here with the NFL Fans! Come get charged with @Ford at the #FordElectrifiedTailgate at Super Bowl Experience! pic.twitter.com/cfneQIS43g

NFT marketplace Fluf World activated its Fluf Haus platform in L.A. for the game, following a successful run at Art Basel Miami in December. The brand’s one-day event on Feb. 11 at the Petersen Automotive Museum was designed to be the ultimate IRL, metaverse-inspired Super Bowl experience for a list of invite-only attendees that included celebrities and NFT stakeholders. The event was sponsored by Liquid Death, Curious Elixirs, JuneShine and Cann.

Fluf Haus L.A., which was streamed globally, included sets by Gavin Turk and T-Pain, a beamed-in digital performance by metaverse “star” AngelBaby, and a headlining performance by Chromeo, who kicked things off with help from the University of Southern California’s marching band and cheer squad.

Additional touchpoints included custom-designed pizzas shaped like “Fluf” and “Party Bear” NFTs, cornhole and beer pong, a photo op with an igloo backdrop and a signature electric-blue Lamborghini, roving costumed NFT characters, and a Fandemonium Station, where Fluf and Party Bear holders could get their hair dyed, and paint their faces with their team’s colors. (Agencies: Alab Group, experiential + p.r; Deed Entertainment, production)

Courtyard by Marriott continued its tradition of transforming a Super Bowl stadium box into a hotel suite this year for its Super Bowl Sleepover Suite contest. To enter for a chance to sleep inside the suite at So-Fi Stadium on the eve of the big game, fans were encouraged to share their favorite NFL experiences involving travel. The winner was the first person to wake up in the stadium on Super Bowl Sunday. (Agency: 160over90)

NBA legend Shaquille O’Neal has become famous for his ticketed “Shaq’s Fun House” Super Bowl experience, and this year the superstar delivered his over-the-top, carnival-style event at L.A.’s Shrine Auditorium on Feb. 11. The theatrical experience included sponsor activations; performances by Lil Wayne, Zedd, Diplo and others, along with O’Neal himself as “Dj Diesel;” an open bar; and gourmet bites from some of L.A.’s most iconic restaurants (Medium Rare and ABG Entertainment handled).

Presenting sponsor FTX had a major presence at Shaq’s Carnival Midway, a state fair-inspired area featuring rides, games, carnival foods and interactive circus performers. The brand enhanced the experience with free NFTs for all attendees, the FTX Ferris Wheel, Crypto Carnival prizes and other surprise-and-delight moments. Ahead of the Fun House event, FTX encouraged consumers to enter the FTX Big Game Sweepstakes for a chance to win $10,000 in Bitcoin and two tickets to the event, including a meet-and-greet with Shaq.

Meanwhile, Wynn offered a special VIP mezzanine at the event, providing tables with bottle service, a dedicated server and direct views of the main stage. It also teamed up with Shaq to introduce the ultimate VIP package dubbed Shaq’s Big Game Weekend Million Dollar Experience. Partakers were flown to L.A. on a private jet with a group of friends, rolled up to the Fun House in a fleet of Rolls Royce’s Phantom models through the brand’s expedited entrance, and enjoyed luxurious lounge seating on stage with private security, a concierge host and endless bubbly. And for the return home? Another private jet.

And Pepsi served as the Fun House’s halftime show sponsor, inviting attendees into its branded speakeasy where a renowned mixologist was on hand crafting cocktails. 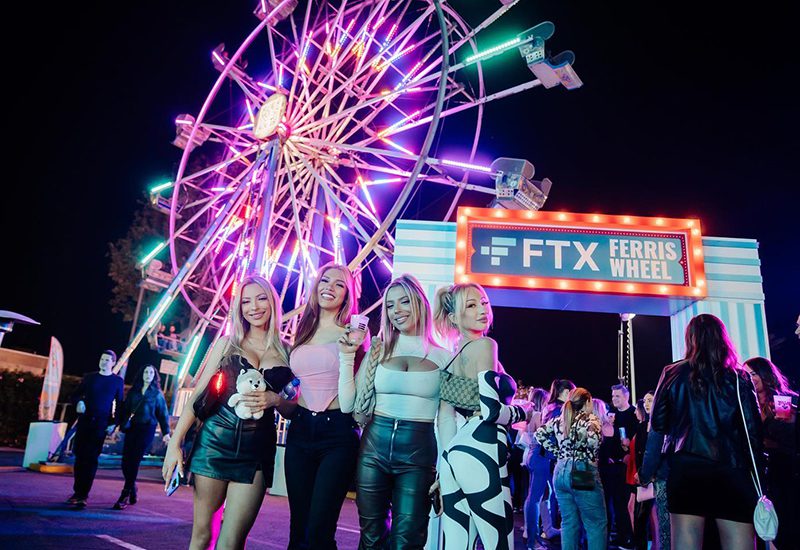 Michelob Ultra’s commitment to gender equality in sports was embedded into its live Super Bowl event in L.A. this year. The activation drew inspiration from the brand’s “It’s Only Worth It If You Enjoy It” campaign and related Super Bowl LVI TV spots, which included equal representation of male and female sports superstars showing their “fun, joyful side” while competing at a fictitious bowling alley called Superior Bowl. For the live event, Michelob teamed up with The Women’s Sports Foundation to make the imaginary venue a reality, and invited Anheuser-Busch employees and partners, including Michelob ULTRA athletes and agents from the NBA, NFL and MLB, to come to the Superior Bowling alley (actually, Lucky Strike Hollywood) for an #ULTRAbowl tournament. The friendly competition featured sports and entertainment stars on Team Offense—Peyton Manning (Captian), Becky G, Julie Foudy and Phaidra Knight—and Team Defense—J.J. Watt (Captain), Emily Ratajkowski, Nneka Ognumike and Jessica Mendoza—facing off and sipping cold ones. The event also included performances by djs Kim Lee and D-Nice, and rapper Saweetie; a Superior Bowl merch shop; a press wall; photo ops; beverages and bites; and open bowling. (Agency: Mosaic North America) 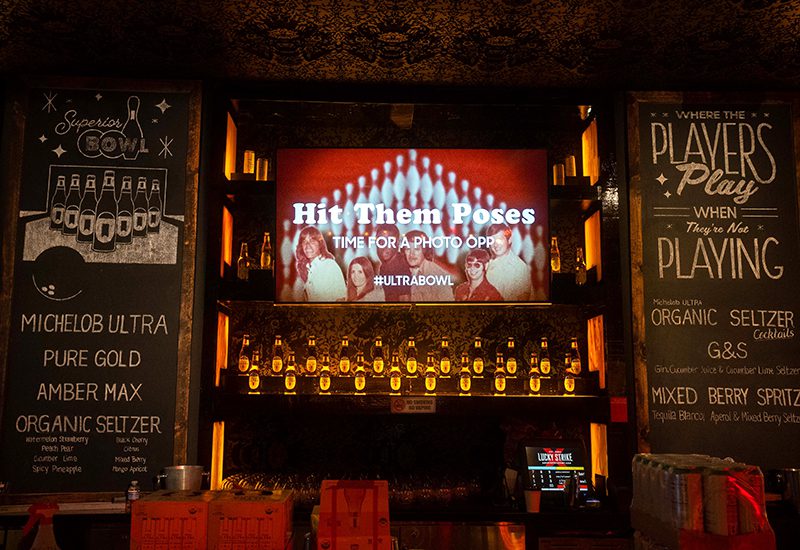