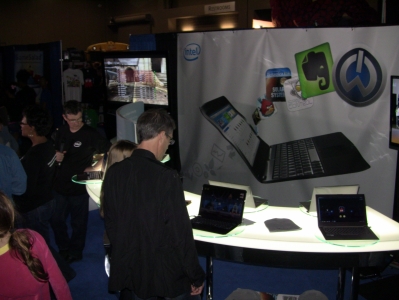 EM’s own Ken Briodagh has been on the ground in Austin for 48 hours now, and so far, he’s seen some of the best the Interactive portion of South by Southwest has to offer.

The Bravo television network wooed its loyal fans and thanked them for being there by throwing an outdoor party Saturday night, despite the soggy weather. And though it was damp indeed, the fans came out in droves for the designer cocktails and cans of Bud.
Google took over four trendy bars and an entire street to establish its off-site Google Village footprint as one of the coolest hangouts not at an official venue. Each bar was decked out in a theme and dedicated to one of Google’s products, suites of products or user bases. The “Maps” house focused on location technology, both current and new software and APIs. The “Android” house was all about the brand’s operating system, both for mobile and traditional devices. It was fun, and covered with custom-made arty versions of the Android robot. The “Developer” house hosted a LEGO build-a-thon on Sunday morning and hacker talks throughout its run; and the “Discovery” house was all about Google’s plans for the future.
Elsewhere in Austin, at the beautiful Palmer Center, the gamers got in on the action with the Screenburn, where brands like Alienware, Intel and IGN took the opportunity to show the people what they’ve got… and what the SXSW attendees now want. Tonight, it’s time for TED@SXSW and Yahoo!’s big bash. Details to come in the next installment.
Don’t forget to click through some of the pictures in the Photo Gallery.
For more coverage, click here and here.
And keep an eye on our Twitter feed @eventmarketer, on Facebook at facebook.com/eventmarketer and on YouTube at http://www.youtube.com/user/EventMarketer, where we’ll post some rough cuts as we get them.
2 ARTICLES LEFT!
Subscribe Today and Get Unlimited Use of the World’s Largest Content Resource on Experiential Marketing