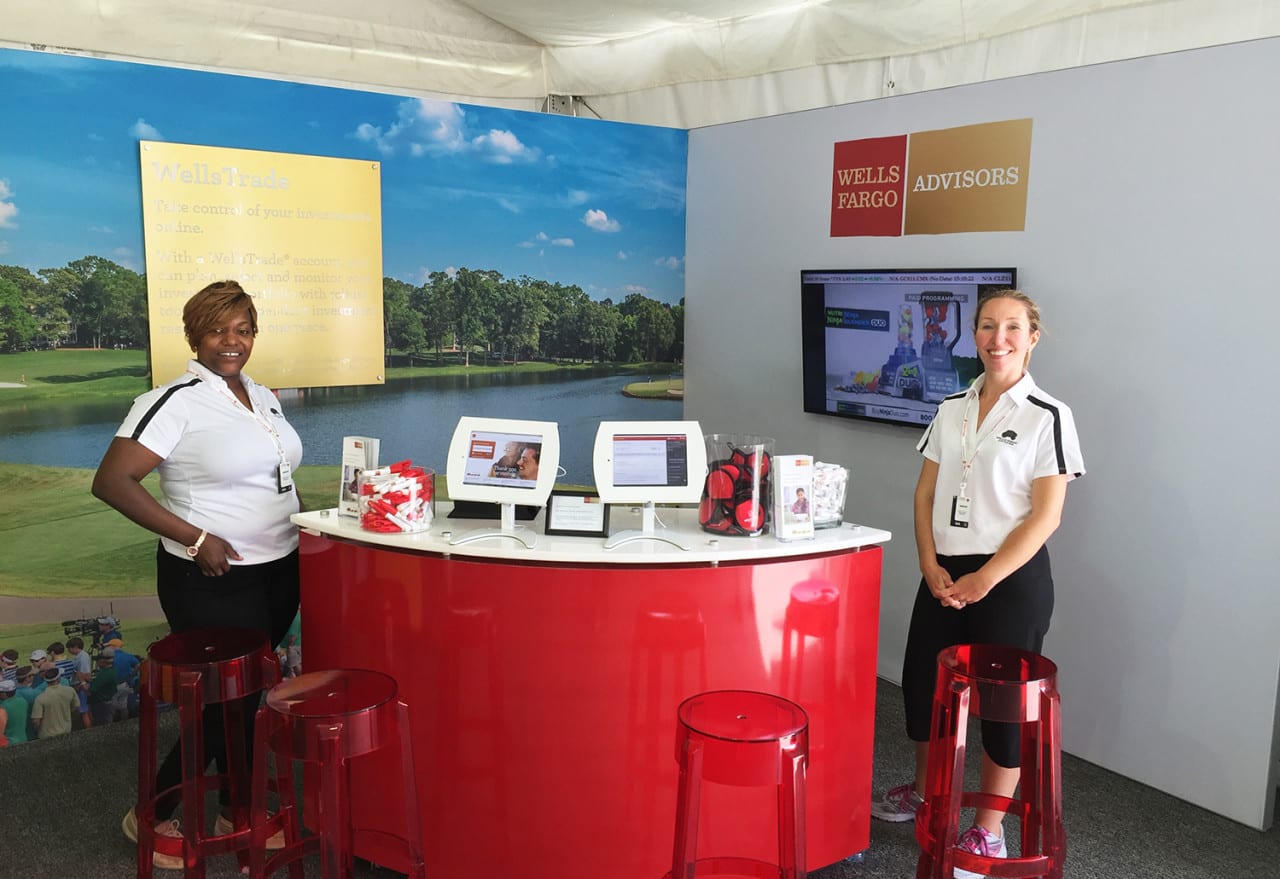 This may sound obvious, but to facilitate social sharing, the Wells Fargo Championship, unlike many others, including the majors, allows people to use their phones rather than confiscate them at the gate. “We want people to have an immersive experience at the tournament, be able to connect with friends, check score updates and be able to use the PGA Tour app and other apps that people use to follow players,” says Nick Carey, vp-sponsorships at Wells Fargo. “We saw that there was so much social sharing going on, and it wasn’t all about Phil Mickelson swinging his club. It was, ‘I’m having a great time at the Wells Fargo Championship with my friends.’”

2. The hashtag action was visible on-site.

The tournament encourages the use of the hashtag #wellsfargochamp across all of its activities, then aggregates those user-generated posts and displays them on the large screens in the social hub. “People think it’s really cool to see their post up on the wall. They know that if they tag their photo with the hashtag it may get popped up on the screen there,” Carey says.

In addition to fans’ photos, the hub displays behind-the-scenes exclusive content and player interviews pushed out under the tournament’s, Wells Fargo’s or the PGA handle. But, says Carey, “You have to have a content strategy going into the event. We didn’t know what the content was going to be, but we knew how we wanted to curate and tell the story. And you need to be open to things that happen, that you can jump on and ride and engage the conversation. It’s social media, right?”

4. It made sense for a bank brand.

Despite the need for social media, Wells Fargo after all is a bank. And banking is a highly regulated and conservative industry. “We’re not Twitter, we’re not Gatorade or Bud Light, but we built a model that, through working closely with our legal compliance department, outlined the type of content we would engage with and the type of story we would tell,” Carey says.

Wells Fargo worked with its partners to determine which of them would push out which type of content. Player- or competition-related content comes from the PGA Tour; tournament-related info, such as tomorrow’s tee times, comes from the tournament office; Wells Fargo spreads content related to the fan experience, such the onsite ambiance, people having a lemonade and barbecue sandwich, being photographed with its signature stagecoach. “It is really important for us that we reinforce the experience at the tournament and people feeling good about us as a brand, so that is the type of content we engage around,” he says.

6. It didn’t have to be everywhere.

As a bank, Wells Fargo realizes that some social platforms, namely Snapchat, are off-limits, however lots of millennial fans who come to the tournament use it. “We had to get comfortable with that and realize that while we as Wells Fargo may not have a Snapchat handle, we look to the PGA Tour or to the tournament to engage and leverage that tool in a way that enhances the experience,” says Carey.

7. It had fun with surprise and delight.

Wells Fargo rewards social posts with the occasional treat—a water bottle or concession vouchers, for example. “We want to reward their behavior, so we empower the team to do that type of thing,” says Carey. Agencies: Team Epic, Norwalk, CT; Postano, Portland, OR, (social aggregation).