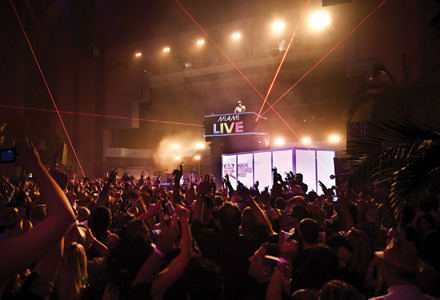 Smirnoff once again is leveraging the power of Facebook to reach revelers around the globe through its Nightlife Exchange Project. And to shake things up a bit, this year it is introducing Madonna into the mix. Last year’s inaugural effort had Smirnoff’s Facebook fans sharing their nightlife faves, from music, to fashion, to venues, to food and, of course, cocktails.

They submitted more than 33,000 ideas to facebook.com/smirnoff, and the best of them came to life at 14 events around the globe on one night—Nov. 27—as 18,000 people from six continents and 10 time zones danced, drank and partied the night away. More than 50,000 artists and djs performed and 1,400 tracks were played. Facebook broadcasted the events live over a 36-hour period and so far the social media platform has garnered close to six million fans for the Diageo-owned vodka brand.

As if that weren’t enough, Smirnoff’s Nightlife Exchange Project this year is nearly five times bigger. Its goal: to get 10 million people in 50 countries to swap their nightlife experiences and host 50 parties simultaneously around the world. Even more, Madonna has partnered with the Project, which this year will pick a dancer for her next tour.

“This year we found a common and international language, an unspoken language that everyone understands, and that is through dance,” says Michelle Klein, vp-global marketing at Smirnoff. “Dance, along with music and drinks, is an essential part of a great night, and we thought why not elevate that category by working with someone of the stature of Madonna, who is an icon of all those things, an icon of nightlife, originality and for creating new cultures.”

Contestants from Aug. 17 to Oct. 10 could upload a 60-second video to smirnoff.com or youtube.com/smirnoff. A panel of judges will narrow the field to 10 finalists who will compete in front of Madonna at one of the Nightlife Exchange parties. The winner may get the chance to join the singer-songwriter on her next tour.

Social media once again will play a critical role in year two of the Nightlife Project. “That is where our community can share not only their ideas around nightlife in general, but also submit and celebrate their dance submissions,” says Klein. “It isn’t about just the best dancers. We’re looking for diversity and new trends, new ways of dancing around the world.”

That emphasis on local culture and relevance gives Facebook a central role in the campaign. Smirnoff’s fans, the world’s largest spirits and alcohol community on the social media site, number six million. “But you can’t see that as one round number because we believe in the power of local,” Klein explains.
Facebook also served as a party central throughout the big night. “We were able to spotlight each of the 14 events as they kicked off, so it was a 36-hour party happening on Facebook,” says Tyler Starrine, vp-campaign development at DEI, Los Angeles, which handles social media for Smirnoff. “We created something you wouldn’t be able to do in real life, but through social media fans were able to experience this global event being activated locally in 14 different places.” DEI is one of a roster of agencies working on the project, along with global lead agency JWT and Mosaic, Splendid, Profero and global experiential agency Virtue, which is owned by Vice magazine.

“We make very considered decisions around the channel choice, the media and how all the elements ladder up, right down to what the tweet is going to be today and the next day and so forth,” Klein says. “It is the sum of its parts. Traditional channels block and tackle. PR and TV play an important role.”

Still, Facebook remains at the center of it all. “The idea doesn’t work if we don’t have consumer participation,” she says. “The premise of the Nightlife Exchange is getting consumers and fans around the world to tell us what makes their nightlife great in their town, and contributing ideas through social media.”

Facebook added a whole new dimension to an off-line experience. “Scalability-wise and participation-wise, Facebook allows more people to contribute to what actually happens offline,” says Starrine. “The ability to get people involved in a really large scale and take it far beyond those people who are able to participate in person makes it a really big win.”  EM