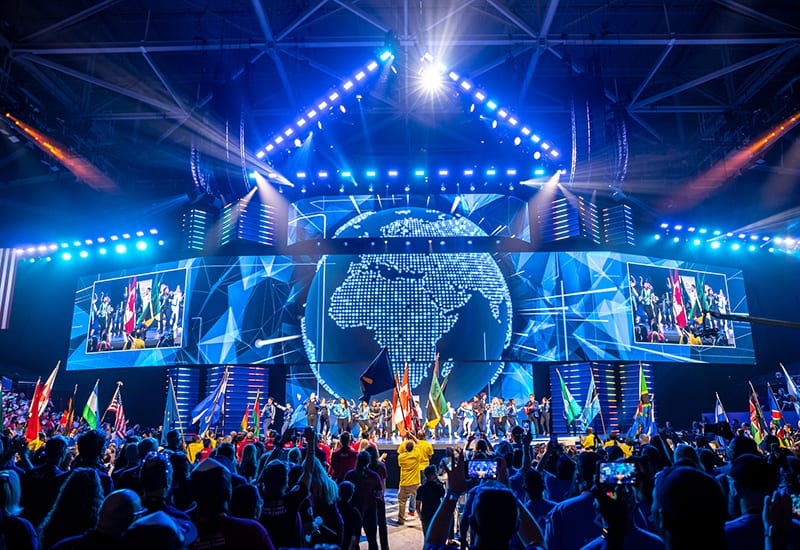 The general stage experience is a moment in a show that sets the tone for the event, that spotlights leadership rock stars and conveys messaging that leaves attendees with a clear roadmap for the event and the brand. Through the rise of LED and livestreaming, how these stages are designed and operate is evolving rapidly. Throw in a little pivot with virtual and hybrid events in the mix, and the concepts, builds and execution of these environments becomes even more nuanced.

To get a clear picture on what it takes to set the stage in modern events, we turned to three experts in the space for their perspectives on what’s trending and how what we know about design is changing in the virtual landscape. Your peek behind the curtain begins now.

Over the last few years, the green movement has infiltrated not just show operations but stage and design, too, as clients aim for fewer physical builds and set their sights on technology that is immersive and reusable. The result is a cinematic, rather than a scenic, backdrop.

“We have this outrageous resolution of LED now—it is so bright and so beautiful—and we have this expansive playground, because we can do custom sizes,” says Robin Gold, head of production at The XD Agency.

Designing for an active audience.

Presenters are getting closer to their audiences on stages that stretch out into seating and satellite stages and they’re interacting with them through smart medallions, wristbands and devices that allow audiences to get involved through polling or lighting effects.

Anamorphic illusions are also helping to activate the audience—special effects that, for example, make the audience feel as though a wave is going to crash into them from the screen.

“For the live event especially, we like to think about an aesthetic that’s going to evolve and develop as the presentation goes on,” says Julie Schneider, executive creative director, The XD Agency. “You get that big moment in the opening, but midway through the keynote, something is happening that will raise the anticipation level.”

Focusing less on scale in virtual.

While an enormous theater calls for expansive screens, when designing a main stage for a virtual experience or a broadcast, bigger is not always better. The bigger you go, the smaller your speaker will be—and their presence and delivery is important.

Everything you do must be designed in the context of the 16:9 screen ratio at home. But that’s not to say you can’t have any fun. LED cubes or LED floors that interact with physical movement on top of them can add drama to a presentation broadcasted through a screen.

“Think about camera angles and the placement of the content at home. A TV director is really critical versus a live show director. It really is a different animal, and TV is a closeup medium,”  Gold says.

Keeping the (virtual) interest level up.

Embrace various short-form content, backdrops and cameras angles to keep your virtual viewers interested and engaged. A few techniques that could help elevate a main-stage presentation: Green-screen effects that allow the presenter to be part of the total image, and mixed reality graphic overlays with animations that float in and around the presenter.

Since the pandemic hit, many event teams have returned to production studios to film main-stage experiences, but don’t discount “remote” staging or backdrops completely.

“Apple did their World Developer Conference in their campus and included beautiful shots, and it was somewhere that we could never get to go, which made it very interesting, compelling content,” says Mark Shearon, founder/managing director at Proscenium.

Embracing the nuances of LED.

LED stands for light-emitting diode, and it’s easy to forget that screens can serve as lighting features as well as canvases for content. An effective, LED-inspired experience should involve a mix of experts and skillsets. “People, like animators, scenic and environmental designers working together as a team, and understanding how those things can work together, is super important,” Shearon says.

And don’t forget that with LED, new media servers are being used all the time and new plug-ins and add-ons for being invented. “It’s keeping up with not only the actual LED product but what drives that product is super important as well.”

The backdrop behind presenters will be just as critical as the full set—just like they would be in a close up IMAG shot in the room. Camerawork becomes even more critical to tell the complete story, according to Chris Simmons, vp-creative at Leo Events.

“Unless we are delivering the experience in virtual reality, the set must work through a series of camera moves and cuts. We want to maintain the sense of theater, but program for the frame,” Simmons says. “For instance, one view might be of the entire set, but then you can cut to a close-up of the set with the presenter and a content window over their shoulder. Then we follow that with a full screen video to make certain the message is of the most importance.”

*This article was originally published in 2020 and is updated periodically