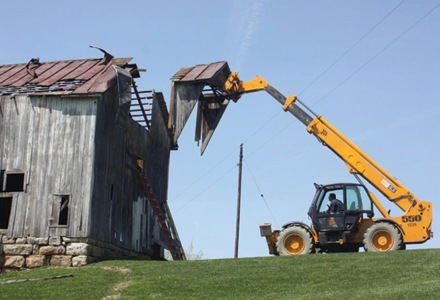 Sunglasses brand Costa Del Mar has been a friend of the environment since 1986 when the company became the first official supplier of polarized sunglasses for conservation organization NOAA, the National Oceanic and Atmospheric Administration. Since then, the brand has become a top supplier of shades and gear for anglers, boaters and adventurers alike, as well as a long-time supporter of philanthropies like the Coastal Conservation Association.

Last year, Costa took its love for the environment a step further when it took a hard look at its own carbon footprint and decided it was time to design a new, more sustainable trade show booth. The material of choice: reclaimed wood. With the help of its exhibit design partner Czarnowski, the brand located a 100-year-old horse and hay barn in Glen Easton, WV, that was scheduled to be torn down, and sent in a team of carpenters to dismantle the barn, board by board, over the course of two days. The long, weathered pieces of knotty yellow pine, poplar and red oak were transported to Orlando where hundreds of nails were removed and each board refinished.

The resulting two-story, 20-foot by 30-foot exhibit resembles a riverfront fishing shack, complete with a screened-in porch, meeting and display areas (also made of reclaimed wood), a bar and comfy rocking chairs and gliders—items rescued, recycled and refinished from local yard sales and junk stores. A vintage Coca-Cola ice box for cool drinks and a vintage pulley system from the barn used to bucket-transport items to the second floor rounded out the experience.

“Having old wood and old furniture makes everything feel really authentic, so people are comfortable and at home when they come there,” says Al Perkinson, vp-marketing at Costa Del Mar. “Everybody likes you to be real and it makes us feel like a more human company than if we used all the laminated prefabbed stuff.”

The cost to recycle and transport the reclaimed wood was higher than wood sourced directly from a lumber yard, but the environmental impact was lower, which brought the program in line with the company’s earth-friendly goals. Czarnowski estimated that Costa Del Mar reduced its environmental impact by 51,607 kg of carbon dioxide—the equivalent of 5,931.83 gallons of gas.

The booth’s history also served as a great conversation starter. The Carmichael Barn, named after the family who owned the land, was originally constructed in 1910. The grandchildren of the man who built the barn still lived on the property and planned to use the barn’s foundation for their new home. “They were really happy it would be reused and not just torn down and thrown away,” says Perkinson. “We sent them pictures [of the booth].” Photos of the barn also grace the walls of the exhibit along with a story about its origins and the original “Carmichael” sign that was on the side of the barn.

Perkinson says the extra effort has been well worth it. Clients are kicking back and relaxing in the booth, convention organizations are bestowing “best in show” awards on the brand and the sustainability message is being reinforced loud and clear. “Our plan is for it to last forever,” he says. “It’s a solid booth made from 100-year-old wood. It wouldn’t be sustainable to tear it down and build a new one so we’ll keep using it as long as we possibly can.”

Looks like Grandpa Carmichael’s labor of love lives on. EM