Cause Marketing: Origins Invites Fitness Buffs to Sweat for the Planet – Event Marketer 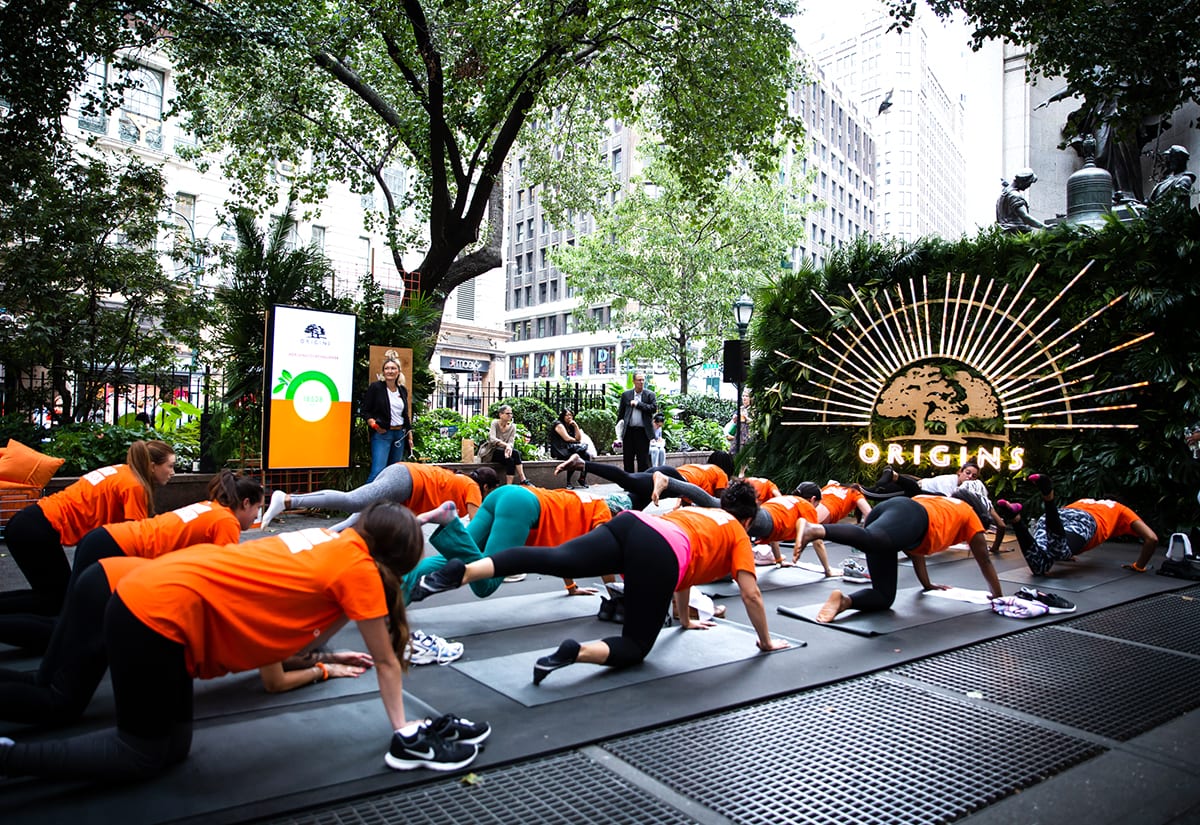 Cause Marketing: Origins Invites Fitness Buffs to Sweat for the Planet

Since its inception in 1990, natural skincare brand Origins has made protecting the planet a key piece of its brand ethos. So when the company relaunched its GinZing Gel Moisturizer with new hydration technology last month, incorporating a sustainability component was only, well, natural. In partnership with American Forests’ Global ReLeaf program, Origins erected an oasis in New York City’s bustling Herald Square Park from Sept. 26-28 where consumers were invited to attend workout classes and learn more about the new product. Taking a cue from the moisturizer’s energizing qualities, the idea was to give as much energy as possible back to the planet during the activation’s three-day run. For every minute of energy expended by participants, a tree would be planted in an effort to help the brand reach its goal of donating 72,000 trees in 72 hours.

The activation footprint highlighted the moisturizer’s orange color scheme and carried a lush nature theme throughout. The space included oversized replicas of the new product, an installation showcasing ingredients found in the moisturizer, like coffee beans, and a photo op that yielded physical prints.

As for the fitness component, New Yorkers could participate in a variety of workout classes each day led by fitness influencers and Origins brand ambassadors Lauren Wasser, Ally Love and Julissa Bermudez. The goal of each session was to focus on the benefits of expending energy with intention, and during the workouts, the energy spent by participants was translated into a light and sound experience. At the end of each class, the collective energy was vividly added into an interactive Origins energy bank installation located on-site. In addition to workouts, attendees could engage with roaming brand ambassadors to learn more about the product, attend fireside chats and sign up for mini facials featuring the new moisturizer.

But Origins didn’t stop there. In addition to the three-day activation, the brand brought its 72-hour challenge to each of its 52 retail locations across the country, where consumers participated in the same activation engagements at a smaller scale during the same 72-hour period. Following their workouts, attendees could enter their expended energy into an Origins microsite so see how much of an impact they made on the Origins fitness challenge, overall.

Ultimately, Origins achieved its goal and will work with American Forests to determine where its 72,000 trees will be planted around the world. American Forests typically plants trees where natural disasters have taken place, meaning the Origins saplings will likely end up aiding in efforts like the California wildfire reforestation, or a similar project. When all is said and done, the Origins campaign will have helped restore nearly 360 acres across the U.S., filtered more than two billion gallons of water and offset 30,000 tons of carbon emissions, the equivalent of removing 6,500 cars from the road.

“We incorporated retail events; we got everybody involved across the country and I think that’s what made it feel very significant,” says Heather Park, vp-marketing at Origins. “Timing was also very impactful because it was the end of Climate Week and we’re coming off of that consumer conversation around climate change. So, it felt like everybody was part of something bigger.” Agency: Fake Love, New York City.

Take a Tour of the Origins Fitness Challenge: