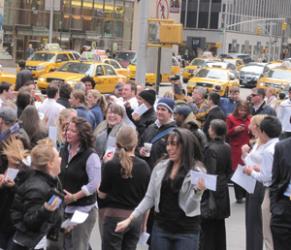 Sampling events are taking on a new level of sophistication. What were once trial-sized giveaway blitzes at major commuter hubs have become longer, more meaningful consumer interactions designed to generate positive word of mouth that can extend well beyond the bounds of the one-time event. Of course, there’s no better way to spread the word these days than through social media. Thanks to tools like Facebook, LinkedIn and Twitter, one happy sampler can now spread her positive recommendations to thousands. The only hitch? It’s up to you to make sure she’s got the incentive to do it. Here are three brands using social media to drive consumers to their sampling events and then encouraging them to share the experience with their cyber friends:

THE MACALLAN
From March 12 to 16, scotch whisky brand The Macallan packed attendees ready to party into a white tent turned rockin’ lounge at this year’s South by Southwest interactive, film and music festival. From 4 to 7 p.m. each day, festivalgoers had the opportunity to partake in The Macallan Tasting Note Project. Attendees were provided with a taste of the Sherry Oak 12 Year Scotch Whisky and Fine Oak 15 Year Scotch Whisky, and then were encouraged to tweet their opinions and impressions to hashtags #macallan12 and #macallan15. All taste-testers were entered to win a private tasting for up to 10 friends.

“Social media is a word-of-mouth amplification device. It takes a recommendation and makes it 10 times more effective,” says Jim Brennan, brand director at The Macallan. “We chose Twitter at SXSW because we thought it would have more relevance with that highly technical crowd.”

SXSW aligns with The Macallan’s target demographic but also allows the brand to leverage the element of surprise (it generally samples at food and wine festivals). By being at an unexpected venue, the brand created a reason to be buzzed about on Twitter among people that wouldn’t necessarily be exposed to it otherwise. Sampling at an alternative event like SXSW also provides the brand with a more democratic tasting note assessment that everyone, not just scotch connoiseurs, can understand (Agency: M Booth & Associates, New York City). “The result is a crowd-sourced tasting note that allows people to tell us what it tastes like,” says Brennan.

JETBLUE
On March 10, JetBlue turned to Twitter— and only Twitter—to drive consumers to its 10th anniversary street stunts in New York City. Nine brand ambassadors and staffers from JetBlue outfitted in anniversary t-shirts lined up at noon in the financial district (at Broadway and Dey Street) and waited to start passing out round trip tickets to JetBlue destinations. There were no props or banners, and no pre-event publicity. JetBlue instead drove crowds to the street teams via its Twitter page as a way to engage its 1.6 million followers and their friends.

At 12:02 p.m., JetBlue sent out its first tweet and by 12:05 the team saw people walking toward them. Fifteen minutes later, it had a line around the block; 20 minutes into the stunt the team had given out 300 tickets.

“We have been exchanging conversations with our customers through Twitter for some time now, but we never truly used it as a promotional channel so as not to overuse it,” says Sonja Hagen-Cole, manager- regional marketing team at JetBlue. “But it was a great way to engage our followers in a fun and unique promotion.”

That day, JetBlue recreated the stunt in Union Square and Rockefeller Center, passing out 1,000 tickets. To keep track of how many people were being driven to the stunts via Twitter, each tweet instructed them to bring a different item to each location. For the first location it was a birthday card, either bought or created; the second asked people to wear something blue and bring an airline related item (peanuts and boarding passes were hot); the third asked that they try to guess the airline’s tenth destination (West Palm Beach) by drawing it on a postcard and bringing it to the street crew (Agencies: Kinetic Worldwide and Destination Media Group, New York City; Michael Alan Group, New York City).

“When you talk about word-of-mouth marketing it’s exciting to think that we were not only touching the individuals that showed up at the event, but people who were following their friends going through the event as well,” says Hagen- Cole. “The reach is so broad.” Throughout the year JetBlue plans to repeat the stunts in more cities. Interested? Just follow the brand on Twitter @JetBlue.

L’OREAL PARIS
To get the word out about its Go 360 Clean facial cleanser, L’Oréal Paris is using Facebook to send students “save the date” messages before its sampling tour arrives on college campuses. Once on site, the brand uploads photos and video content from each tour stop and offers a printable $1 coupon.

“Social media tools take a live brand experience and give students organic content for them to speak about during, as well as post-experience,” says Jennifer Paganini, assistant vp-consumer promotions and alliances and events at L’Oréal. “It’s a great vehicle for us to drive awareness for the event and drive traffic to our experience.”

The Go Beyond Clean College Campus Tour kicked off March 17 at California State University in Long Beach and is making 10 stops through April 27. Inside a branded Airstream, the brand indulges students in a full-fledged facial cleansing experience. They are greeted by a knowledgeable brand ambassador that discusses each girl’s skin type and helps them pick the appropriate cleanser. Then the student is handed a water bottle as well as a spa-style headband before being coached through the cleansing process over one of two sinks. Once the consultation is finished, the students are directed to a spa-like area to receive a back massage. They are welcome to linger and drink more water as well as touch up their makeup with L’Oréal cosmetics. Each attendee walks away with the headband, a sample, a brochure and a coupon.

To inspire data collection, they’re encouraged to enter a sweepstakes at laptop stations under a tent outside the Airstream to win an iPad or a trip to the cleanest place on earth, Tazmania, Australia. L’Oréal also offers smaller scale experiences for the product via two GEM electric vehicles (Agency: Legacy Marketing Partners, Chicago).

Primarily a tool to raise awareness for the campaign and drive traffic to the experience, the Facebook component also extends the event off campuses.

“It takes an event that is private to college campuses and opens it to up to a larger audience,” says Paganini, adding that L’Oréal has applied a similar strategy to its L’Oréal Paris Color Space experience at state fairs where consumers could have real-time consultations with L’Oréal Paris beauty experts in New York and Paris on Skype stations. “It opens up the footprint to other consumers that can’t experience it,” she says. EM