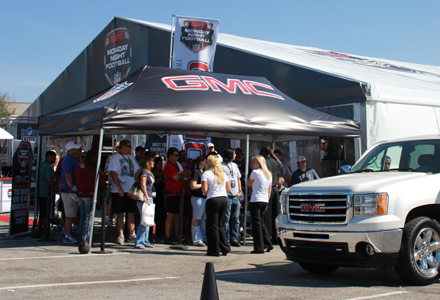 GMC, the official vehicle of the NFL, has boosted its year-two sponsorship of the Monday Night Football Tour with more fan-friendly experiences, test drives and community projects that promote its line-up of cars. The tour takes place in high-end malls on Saturdays and Sundays before the Monday night game, followed by events held at Boys and Girls Clubs on game day and playground builds with the United Way on Tuesdays.

The mall experience fills a 100-foot by 150-foot area where fans can participate in football-inspired activities such as the Under Armour Combine event, an activity that replicates the vertical leaps, broad jumps and other challenges performed by college athletes in pre-NFL draft evaluations. (Under Armour is the official sponsor of the NFL Scouting Combine events.) The contest, in which fans get to grade themselves against the pros, ties in with GMC’s tagline, “Professional Grade.”

Fans can also catch live feeds of NFL games on four big screen TVs and video game kiosks located in a lounge area with leather couches or compete against other fans in an electronic football toss. An on-site “broadcast booth” provides a viral and social media opportunity to tape a souvenir green-screen video with play-by-play announcer Mike Tirico. Visits by current and former NFL players add to the authenticity of the experience.

The community playground builds are part of a program called The United Way Healthy Kids Zones—Driven by GMC that supports the agency’s nationwide effort to reduce childhood obesity and encourage physical activity. United Way volunteers and NFL players build the playgrounds in one day with equipment supplied by GameTime and paid for by GMC.

The focal point of the tour, however, is the nearly 30 GMC Acadias, Sierras, Terrains and Yukons available for eight- to 10-minute over-the-road test drives and as static displays. After their test drive, attendees are entered in random drawings to win Monday Night Football game tickets, nflshop.com gift cards and signed memorabilia.

“Our ultimate goal is to sell vehicles,” Chris Hornberger, national sales promotion manager at GMC, told Buzz. “Once we get them into the product, their probability of buying is great.” Agency: Intersport, Chicago.