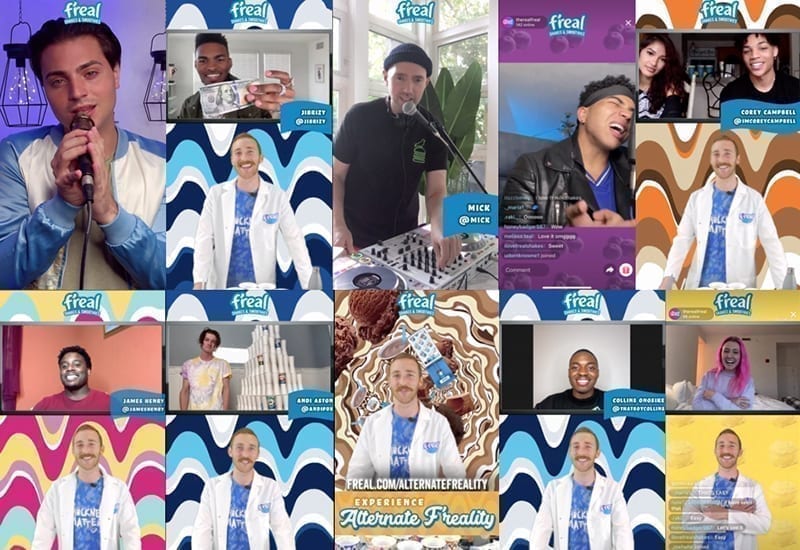 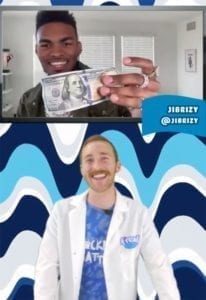 On the heels of a brand relaunch, “blend-it-yourself” beverage brand f’real on June 24 debuted its first integrated marketing campaign to capture the attention of its Gen Z target. The Choose Your Own Alternate F’reality (#FrealAF) program included a virtual reality experience, a live digital event, a TikTok challenge and influencer partnerships, all designed to meet Gen Z where they are—glued to their phones.

To grasp the concept of the campaign, you have to understand how f’real beverages work, so here’s the deal: f’real makes shakes and smoothies that are available at thousands of convenience stores. Each store has a piece of equipment required to blend the beverage. The machine also allows consumers to choose the consistency of their shake or smoothie. To bring this to life through VR, f’real created swirling beverage graphics that could be slowed down or sped up based on how thick the user chose to make their virtual drink. The activity could be experienced via Google cardboard goggles, or with the naked eye on a microsite. It’s also available on the screens of all f’real blending machines; consumers simply scan a QR code with their phone.

The digital event kicked off on Instagram Live with f’real consumer marketing manager Alec Ledbetter. With the help of a greenscreen, f’real used its VR experience as a backdrop for the event, and leveraged multiple camera angles and a wireless mic to allow Ledbetter to connect with live drop-ins and viewers simultaneously. The host was joined by influencers including a singer-songwriter, a magician, a dj and a rap artist, all of whom performed and helped select winners of giveaways, which included f’real coupons and a f’real-branded Nintendo Switch.

The second half of the digital event was hosted on TikTok, where prior to the unveiling of the campaign, the brand revealed its #FrealAF challenge, which featured influencer partnerships and tasked consumers with sharing their own version of an Alternate F’reality (the hashtag has racked up 28 million views). During the TikTok event, those who participated in the challenge were entered to win giveaways. The event starred another cast of influencers, including a digital creator, a comedian, a vlogger and a singer/dancer.

“The objective of a virtual campaign is very much the same as one of a live experiential event,” says Hayden Perry, director of marketing at f’real. “You keep your audience top of mind, you build buzz prior to the event in order to generate attendance, you engage people and make them feel like they’re a part of the action. And then you include a shareable component to make sure your event has legs and lives on far beyond the day of the event itself.” Agencies: DEMONSTRATE (lead agency); TACTIC (VR production); Mavrck (influencer partnerships).