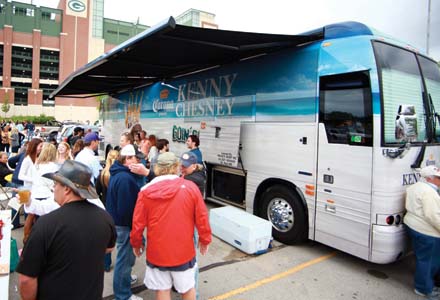 Major concert tour sponsorships can be powerful platforms for developing an affinity between passionate music fans and your brand. But if the tour turns out to be a one-time gig with a group of disparate co-sponsors, is it really worth the investment? Corona and Hooters are two brands that have discovered the value of building brand synergy and a long-term relationship with major recording artist Kenny Chesney that fits both Chesney and the brands like a well-worn cowboy hat.

When Corona decided to sponsor Chesney’s tour in 2008, it wasn’t because the beer brand had a history of sponsoring country singers. What lured Corona in was Chesney’s laidback beach lifestyle.

“We got involved with Kenny because of his talent and the lifestyle that he lives, which is the reason he is such a good fit. It’s the beach lifestyle, vacation in a bottle, relaxation, an escape, which he provides to consumers when he goes out on stage,” says Daniel Kinghorn, manager-national sponsorships at Crown Imports, which owns Corona. “We can align and piggyback on that lifestyle and reputation and I think it’s mutual—he likes the fact that that’s what we represent to our consumers, too.”

Corona has now sponsored three Chesney tours. What’s their secret to a lasting relationship with an artist like Chesney? It’s an understanding of each other, says Kinghorn, which in this case is facilitated by Minneapolis-St. Paul-based AbiJack Management, which acts as the conduit between Chesney and his sponsors. It’s also important that there’s a harmony among the different brands sponsoring the tour.

“Kenny is a good businessman and he understands what we represent and we make sure we communicate what our objectives are to him and the tour through AbiJack,” says Kinghorn. “It’s a matter of everybody being on the same page and what we’re all trying to do and how we complement each other. We never try to force ourselves onto an artist.”
Restaurant chain Hooters has come on board this year, too. The brand wanted to test it out for a year and so far, all signs are that the chain will be talking about a long run with the artist. “The Kenny Chesney tour exudes exactly what the Hooters brand is about, which is having a great time,” says Noela Scarano, director of marketing at Hooters.

“Another unique thing is that while our demographic is focused more on males, we were really looking to broaden the appeal as it relates to the female demographic, so not only in our restaurants where we held some of our activities and events but when we were out there engaging with the female consumer it was really important to have something non-traditional for us to be part of and we’re excited to see the results of that this year.”

As a first-year sponsor Scarano says constant communication with AbiJack and the tour management was key. She warns that it’s important to go into it knowing that you’re probably going to have some tweaks and different opportunities in the future. It’s critical that the organizers and event planners and the tour understand where the brand is at that point and how it wants to be perceived as it’s out there marketing itself. “We went in saying we’re going to be here one year and see if it works for us. If it does, then how can we make it bigger and better in years to come,” says Scarano.

One integral part of the success both Corona and Hooters have had with the tour is how organically they fit into the feel of the overarching theme of the beach and having fun. The same applies to Costa Del Mar sunglasses, which also sponsors the tour and embodies the same laidback lifestyle. AbiJack, which handles all three, says having that organic connection is huge to achieving true partnerships and authentic activations. He probably wouldn’t throw Maytag in there. Laundry’s not exactly most people’s idea of a good time, now is it?

“These are a family of brands that make sense and the goal is to make sure the existing sponsors and maybe the future sponsors all fit together and co-exist in our world,” says Brett Palmer, ceo at AbiJack. “One thing you don’t want is to have separate brands doing separate marketing around one artist. It gets the consumer mixed up.” Palmer adds that artists and labels are looking for partnerships that get them outside of the music aisle, such as Hooters at their restaurants and Corona at retailers. Corona and Hooters, he says, has helped his team and the tour learn and grow the expectations of Chesney because they’re pushing to get things done.

“I have seen sponsors come in and do their own thing and try to overbear each other and one up it and this really hasn’t been the case,” says Scarano. “In the case of Corona we sell a lot of their beer inside our restaurant and we want to sell more, and the two of us together have really taken that to the next level.”  EM