Meals on Wheels: Uber Whips Up a Mobile Dining Experience to Launch its New Credit Card 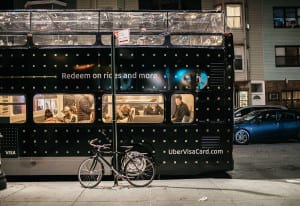 Uber took the double decker to a different neighborhood each day, parking in high-trafficked areas to attract attention.

Uber earlier this month took to New York City streets to celebrate the launch of its Uber Visa card. But instead of utilizing one of its sedans, the app-based ride-sharing service revved up a double-decker bus that it converted into an elevated mobile dining experience for a small group of Uber “power users” and social media influencers. On board, Alex Guarnaschelli, one of the city’s top chefs, created meals inspired by each neighborhood the bus visited—the Union Square Green Market, the Jewish community and culture in North Brooklyn and the Gilded Age of Lower Manhattan.

“The idea was to create something that would appeal to our target Uber Visa card audience and also be a bit of a spectacle at the same time, something that would be Instagrammable, that people would remember and talk to their friends about,” says Heidi Vance, global campaigns manager at Uber.

The outside of the bus touted the benefits of the card, which is co-branded with Barclays Bank and rewards users with four percent back on dining, along with other benefits on hotels and airfare and online purchases. Inside, the upper deck of the bus served as a dining room where each day, two seatings of nine riders and their plus-ones enjoyed the chef’s creations. In the lower deck kitchen, Guarnaschelli mingled with guests and discussed the dinner to be served. Uber took the bus to a different neighborhood each day, from Nov. 10-12, parking in high-trafficked areas that would attract the attention of passersby, who stopped and took pictures.

High-frequency riders received an email invitation to the experience. Seats were awarded on a first-come, first-served basis. “We wanted to treat it like a restaurant opening, where you would get an offer to come and join, and if there was a table available, you got it,” Vance says. Agency: Manifold, San Francisco.