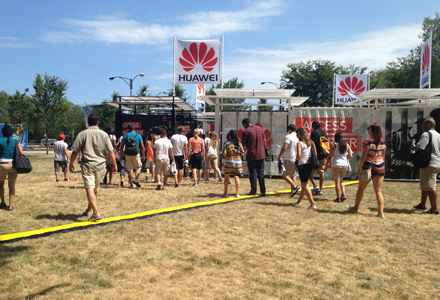 Huawei Device USA, a subsidiary of the Chinese-based information and communications technology provider, launched its first experiential campaign at Taste of Chicago from July 11 to 15, giving U.S. consumers their first “taste” of Huawei smartphones and tablets from carrier partner T-Mobile. The campaign’s theme, “Access Smarter,” highlights the accessibility, quality and affordability of the Android-based devices. Additional carrier activations in Baltimore, Los Angeles, Miami, San Diego and Seattle  are planned to build local awareness and help drive consumers to retail locations in those markets.

Huawei entered the U.S. market in 2001 and until recently has spent most of its efforts building relationships and selling into carriers such as T-Mobile that in turn sell its devices to consumers. Marketing efforts centered primarily on trade shows such as CES and CTIA. Now that virtually all of the major carriers sell its smartphones, Huawei is reaching out to consumers in a bid to build additional demand for its products.

At Taste of Chicago four experience zones highlighted the benefits of Huawei devices. Access Smarter Design showcased the cutting-edge design of its high-end products. Access Smarter Entertainment showcased Huawei’s entertainment capabilities. A dj was on hand to spin live beats and attendees could text him requests. Guests could browse more product and get a hand massage at the Access Smarter Living zone. Access Smarter Solutions demonstrated the full range of Huawei’s technology solutions, from smartphones to WiFi hotspots.

Through the Access Smarter online competition, which ran through Aug. 3, consumers could share what they wish they could do with their smartphone. Four winners will participate in an experience inspired by these wishes, which they will be able to document on a Huawei device. All contestants will be eligible to win a free Huawei MediaPad tablet each week through Aug. 6. Social media channels on Twitter, Facebook and YouTube round out the campaign.

“This was not a marketing activity, this was an experiential activity,” Bill Plummer, vp external affairs at Huawei Device USA, told Buzz. “This was a campaign to capitalize on mid-summer in the middle of the country and build awareness. We started with a ‘taste’ of Chicago, but we went into touch and feel and experience.” Agency: Jack Morton, New York City