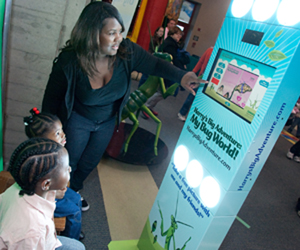 Terminix Takes Bugs on Tour to Connect with Families

Terminix is taking its mobile insect museum on a cross-country tour to educate family decision-makers about pest control. Dubbed Harry’s Big Adventure: My Bug World, the tour sprung from Terminix’s presenting sponsorship in 2008 of the grand opening of the New Orleans-based Audubon Insectarium, the only insect museum in the country. The sponsorship resulted in a few mini tours that served as a springboard for its current 3,500-square-foot mobile insect museum launched on Feb. 12, and on reserve for four months at the Memphis Children’s Museum. The program is in negotiations for future stops in Arkansas, California and Texas.

“Pest control is generally a low interest category which not many people think about, so we thought how can we make it more interesting and more relevant to consumers,” Valerie Sherman, vp-communications at Terminix, who handles the program, told Buzz. “This was a great way to not only educate people on the role that insects play in our environment, but also how pest control plays into their lives.”

The tour includes an insect petting zoo and a bug chef who whips up specialties like scorpion scaloppini and cricket orzo (sounds gross, but the kids love it), interactive bug habitats like forests, meadows, water and more. And there’s a model home where kids can go in and put on a Terminix technician’s jacket and hardhat, take a clipboard and inspect the home for pests, like roaches under the sink and spiders in the corners.

To generate consumer data, Terminix uses a self-serve touch-based photo kiosk with different themed backdrop options. After picking their backdrop, visitors stand in front of the camera and pose during the countdown before the photo is taken. Families preview and adjust the photo before printing, emailing it to themselves or sharing it on Facebook, MySpace and Twitter. Once they retrieve the photo on a Terminix branded microsite they are asked to fill out a survey and opt in to receive a free home inspection. A second touch-based kiosk with promo materials is on hand to collect data from those that don’t want to take a picture (Agency: Smash Experiential, Memphis; Photo Activation: Catch the Moment, Houston).