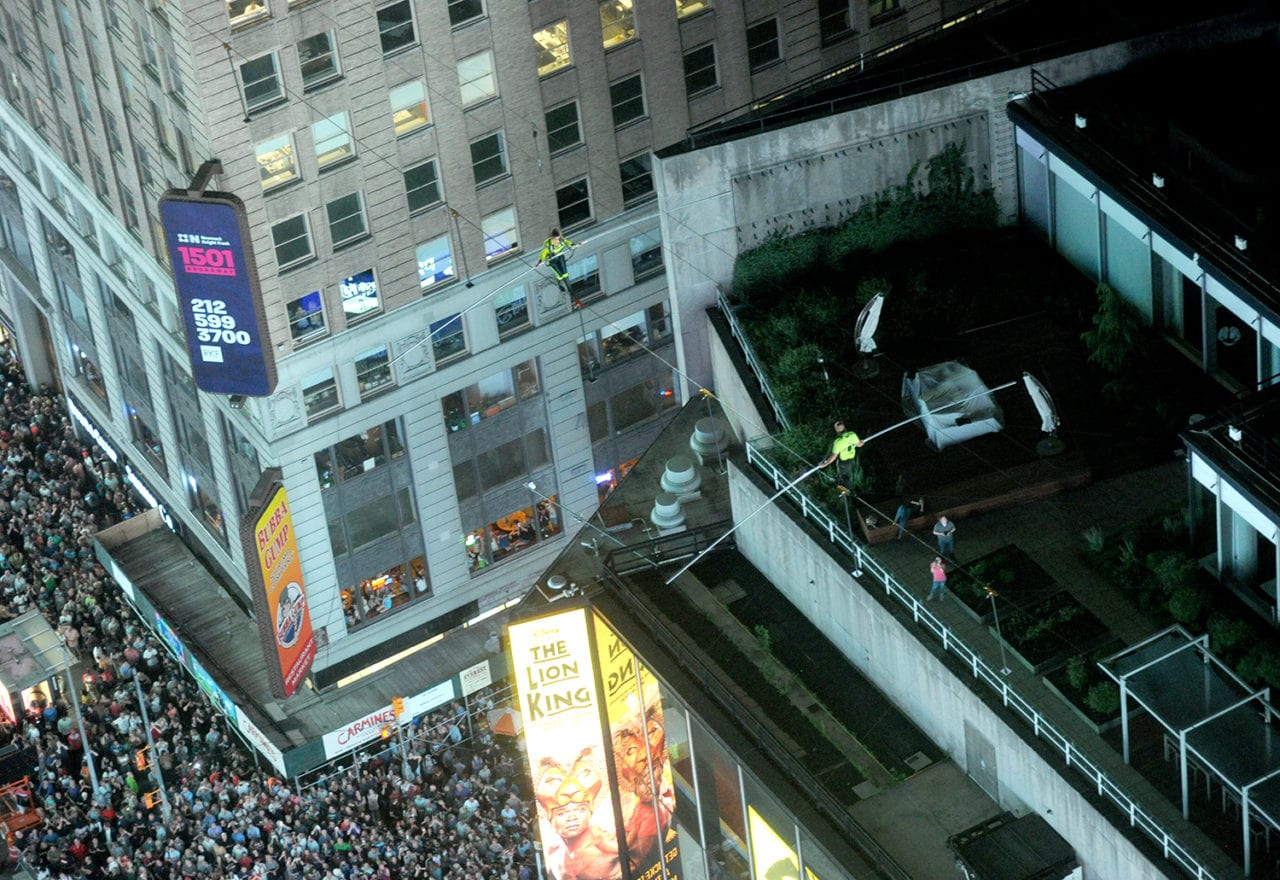 Tightrope walker Nik Wallenda brings a whole new meaning to the word “stunt.” He has traversed Niagara Falls and a Grand Canyon-area gorge on a high wire—without a safety net and before a live television audience. And just last month, on the evening of June 23, Wallenda took his high-wire artistry to the Big Apple and walked from One Times Square to Two Times Square on a ¾-inch wire 25 stories above the ground with his sister Lijana, who had been badly injured from a fall during their group high-wire rehearsal just one year ago.

The special aired on ABC and was jointly produced by iDEKO, which handled the permitting, logistics and safety, and Dick Clark Productions, which ran the broadcast and production. Pulling it off was a monstrous challenge and a logistical beast. We spoke with the agencies behind the production to gain a few behind-the-scenes insights on what went down. Or, rather, up.

Learn how to profit from the esports industry at the Esports Business Summit: The brands. The media. The tech. The teams. Together in Vegas, Sept. 10-12.

Planning ahead for a marketing stunt is a no brainer. But when dealing with a stunt of this magnitude that involves so many stakeholders, departments and agencies—in this case, the police department, the buildings department, the fire department, the Times Square Alliance and the Department of Labor (to name a few)—it’s monumentally important to leave enough time for planning. Levitra 20 mg http://www.wolfesimonmedicalassociates.com/levitra/

“When you are working on a project with so many moving pieces and it is wrought with risk and safety, you want to have as much time as possible,” says iDEKO ceo Evan Korn. “We had to connect with so many people, including all of the buildings that line Times Square, explain the project, work through all of their concerns, revisions, and then, ultimately, create contracts.”

Partnering with local agencies on the ground is a key component in any event planner’s toolbox. But in the case of iDEKO and Dick Clark, the experience and history the teams had made a huge difference. For instance, iDEKO’s Korn had previously worked for the City of New York as the inaugural executive director of the Office of Citywide Event Coordination and Management, created by former Mayor Michael Bloomberg to help coordinate necessary approvals from all of the agencies involved. That specialized knowledge helped inform the process. Likewise, Dick Clark Productions has been producing the “Dick Clark’s New Year’s Rockin’ Eve” show for decades. The resulting relationship with the Times Square Alliance, a key stakeholder, was instrumental in conversations with the various agencies. Moreover, there was overlap between the crews of both productions, thereby enhancing expertise working in Times Square. Metronidazole http://advicarehealth.com/metronidazole.html

Don’t skimp on safety and security.

For the Times Square high-wire stunt, Wallenda and his sister wore harnesses, per New York City regulations. It’s just one of the many safety elements required for the production that not only mitigate risk but help build the case for the stunt to be approved in the first place.

“When you’re doing these large-scale projects, you really can’t skimp on things like safety and security,” says Korn. “You need to be thinking about that in a big way, because that’s what the city’s focus will be on.”

Don’t forget to involve your audience in the most intimate way possible. Despite being 25 stories off the ground, the show was, in fact, quite intimate. This was achieved through the use of audio and video. Viewers of the broadcast were able to hear the Wallendas speaking to the host and, most importantly, to each other. Viewers gained a window into the family affair through their conversations—including a couple of hair-raising scares—as well as camera views of what the Wallendas were actually seeing 25 stories above the pavement.

From a technical standpoint, it takes a tech village.

“We had three different tech managers who were working on all different elements between the video piece of it and the audio piece,” says Linda Gierahn, evp-production at Dick Clark Productions. “It was very challenging in the sense that we had our hosts talking to Nik and his sister Lijana. That part of it made the walk so much more appealing to the viewers because they were able to see what was going through their heads at that time.”