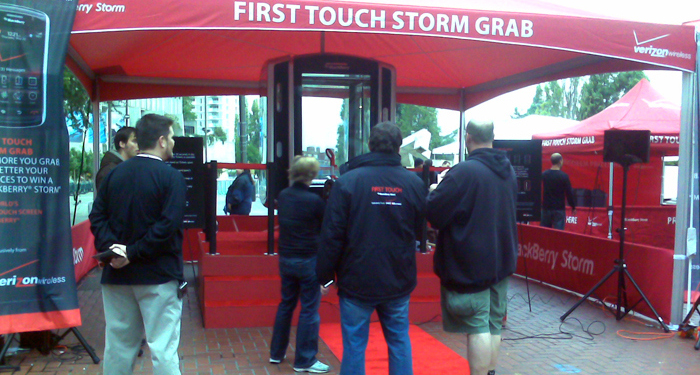 Verizon Wireless Kicks Up a Storm

To promote its new handheld device the BlackBerry Storm, Verizon Wireless in November launched a series of promos in Atlanta, Chicago, New York City and San Francisco that had consumers grabbing among a flurry of swirling tickets for a chance to win the new phones and other prizes.

Consumers donned safety goggles and stepped into the Traveling Storm an oversized replica of a BlackBerry Storm that was placed in a high traffic area such as Times Square in New York City. Once inside the Storm participants had 30 seconds to grab as many of the winning tickets as they could. In addition to the Storm prizes included $50 Verizon Wireless gift cards for activation and Bluetooth headsets.

“The idea was to drum up buzz and excitement about the launch of this new phone ” David Samberg pr manager New York Metro region at Verizon Wireless told Buzz. “The event drew as many as 300 people at each city some of whom waited two-and-a-half hours to play at times in the rain.” Agency: Momentum New York.