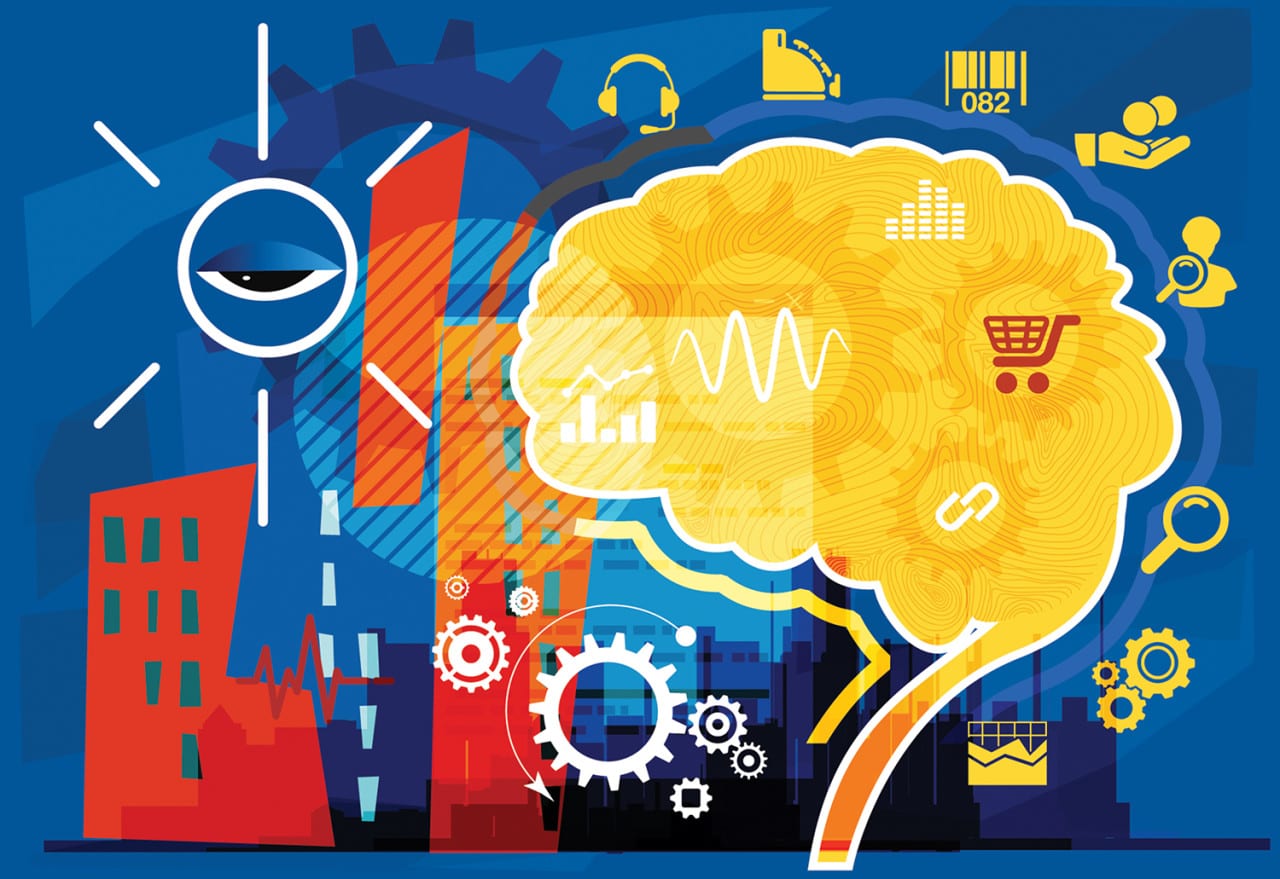 How Primal Instincts Affect Consumer Behaviors: An Excerpt From ‘Decoding the Irrational Consumer’ 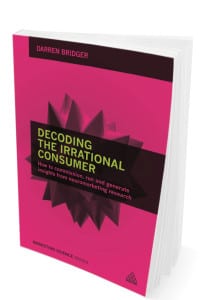 In Decoding the Irrational Consumer, author Darren Bridger uses neuromarketing data to reveal how consumers’ primal instincts affect their decision-making process and how to use those insights to influence their brand loyalty and purchasing behaviors. In the following excerpt on heuristics—a concept derived from behavioral economics defined as “cognitive shortcuts” or rules of thumb that simplify decision-making—Bridges explores why consumers are somewhat irrational when it comes to calculating value and comparing the attractiveness of other offers. Whether you’re engaging with customers in a brick and mortar store or on-site at a high-profile activation, these observations offer insight into how consumers experience your product or service—and how to increase its value in their minds.

While there are numerous documented heuristics that influence consumer behavior, below are seven of the most wide-ranging ones.

Loss Aversion and the Endowment Effect

We are more sensitive to and motivated by fear of loss than prospect of gain. In the ancestral environment that our brains evolved in, it is easy to see how the pressures of that hunter-gatherer life would have led to this bias. Sources of food were always uncertain, and fear of starvation stalked our ancestors as much as the lions and other predators of the savannahs. One strange consequence of this is that we tend to value things more highly once we already own them. This can even lead to some very strange behavior. For example, once we have bought something, even if we then don’t use it, we feel like it is a ‘sunk cost,’ and therefore we are obliged to stick with it. Some people will even keep shoes that they never wear, until a certain period of time has passed that the shoes will have ‘lost their value’ and only then feel able to throw them away. To do so before would feel like a loss!

Thirty-day trials or other ‘try before you buy’ schemes may increase the perceived value of a product in the consumer’s eyes. Simply reminding consumers of ‘benefits’ they could gain may not always be as powerful as showing them how a product/service can help them protect what they already have.

As value is often subjective, or at least ill-defined in the consumer’s mind, other prices that they have seen or heard recently can act to set their expectations of a reasonable price. For example, as salespeople have always known, showing a prospective customer one or more higher-priced options will make a mid-range option—that they would otherwise perceive as too expensive—more reasonable. However, the effect is even stronger than you might think. Experiments have shown that merely mentioning or showing a number can influence people’s numerical judgements soon afterwards. For example, in one experiment the participants were asked to use a roulette wheel that was, without them knowing, rigged to stop on either 10 or 65. They were subsequently asked to estimate the percentage of United Nations members that were African countries. Those whose roulette number was 10 guessed on average 25 percent while those whose ball hit 65 guessed 45 percent. In another experiment, participants merely having to report their social security number subsequently affected people’s estimate of the value of a bottle of wine (the lower their number, the lower the value). This effect can also have implications for survey design. The psychologist Stuart Sutherland pointed out that people are drawn towards the middle figure when you ask them to rate something on a numerical scale, and the ranges of figures you give in a question can affect the responses you get.

How a product is displayed on-shelf can influence its perceived value. Shoppers will compare prices with adjacent products in order to perceive what is reasonable versus cheap/expensive. The introduction of more expensive variants in a category can help the other variants as it makes them seem more reasonably priced.

By making a (reasonable-sounding) comparison between a product/service and a more expensive one (i.e. comparing a relaxing spa morning to a beach vacation) you can shift people’s frame of reference and make them happier about spending more. Even including a number in the communications for a product or service could influence consumers’ perception of its price, particularly if it is a new product that doesn’t yet have a determined value in the mind of consumers.

In contradiction to received wisdom, the anchoring effect can mean that it is best in a price negotiation to be the one who starts, and mentions the first price, which can then affect the perceptions of what is a reasonable expectation.

The Affect Heuristic and First Impressions

When acquiring and weighing up all the necessary information to make a rational choice is just too much, we often just ask ourselves ‘How do I feel about this option?’ Typically we emotionally weigh up something new very quickly, and our judgements tend to be long-lasting. This is because we like to be consistent, so when beginning with a positive impression of something we subsequently seek and process information that confirms it (the same for a negative impression), a phenomenon known as the ‘halo’ effect. For this reason, first impressions—not just of people but of products, packaging and other communications—can be vastly disproportionately influential. For example, one study found that web browsers formed an impression of the appeal of a web page in as little as 50 milliseconds! However, because this happens at a largely nonconscious level (or only fleetingly passes through our consciousness) it can be hard to measure through asking questions, and is perhaps better measured through nonconscious techniques (in particular, implicit response measures).

(Note: the power of first impressions can also be a form of anchoring—our first reference point with something determines how we calibrate our responses to it in the future.)

Careful consideration should be paid to the introduction of a new product, package or campaign. As well as the details of a design (for example, of a web page), pay attention to the look and feel of the overall impression, or gestalt, as it is this that will be taken in during those first crucial milliseconds.

Consumers will often look to others as a shortcut to making good buying decisions. If you know that others have bought something, it feels safer for you to do so, and in some instances you may want to make the same choices as others in order to give yourself something in common with them (i.e. giving a new best-selling paperback novel a whirl because everyone else is reading it). When shopping carts were originally invented in 1938 their creator, Sylvan Goldman, nudged reluctant shoppers to adopt them by paying people to push them around for a couple of years so that the behavior seemed normal (by the time he passed away in 1984 he was worth $400 million!). The U.S. electricity company Opower has successfully encouraged its users to save energy by giving them feedback on how their consumption compares to more energy-efficient households in their neighborhood.

Remind consumers of the success of your product, particularly, where possible, of local success or of people ‘like them’ who have been using it. Don’t emphasize the fact that others are doing a behavior that you don’t want. For example, don’t say something like ‘Still only 10 percent of customers have discovered how great our new service is…’

There are many heuristics that relate to our poor natural ability to judge statistical likelihoods. Our brains just did not evolve to think this way. Instead we tend to overestimate the likelihood of events that easily come to mind. For example, when asked if there are more words that begin with the letter ‘K’ than have it as their third letter, most of us tend to answer that there are more that begin with it. We answer this way purely because it is easier for us to think of examples of words that begin with ‘K’ than have it as their third letter (there are in fact more words in which ‘K’ appears as the third letter). This is one of the reasons why well-known brands enjoy an advantage. When a consumer needs to buy something in a particular product or service category, particularly if they don’t buy it regularly, they will think about which brands come to mind. These may not be the best brands, or even the brands that are most suitable for their needs, but they are the ones most available to memory.

It is very important for your brand to be ‘mentally available’, i.e. to easily come to mind when your consumers think of what options are available to them.

Hyperbolic discounting is a fancy way of saying that people generally prefer rewards now rather than in the future. During most of our evolutionary history our ancestors were dependent upon uncertain food sources, so this preference for concrete resources now over possible resources in the future would have been very useful. Any promise of future food carried uncertainty. For example, most people would prefer a prize of $100 now over $120 in a month’s time. This seems irrational when viewed from a purely logical and arithmetic perspective, but it is a good example of where a more ecological rationality is at work. In the real world, an offer of $120 in a month’s time carries uncertainty: will the offer actually materialize? Can you trust the person making it?

Interestingly, our sensitivity to getting something sooner rather than later drops off over time. Differences between tomorrow and the day after will be greater than the difference between 100 days’ time and 101 days’ time, even though both involve a difference of one day.

Similarly, consumers are not always that good at remembering how they felt in the past, or predicting how they will feel in the future if they make certain spending choices. We tend to remember experiences more by how we felt at the most intense moment and then at the end, rather than create a mental average of our feelings across the whole experience.

How you leave consumers at the end of an experience—be it in-store, in a restaurant or on vacation—is disproportionately important to their memory of it, and hence their desire to experience it again.

Many religious rules may appear restrictive and hard for some to understand. For example, rules about complete abstinence from certain things (deemed to be unhealthy or undesirable to the community) or abstinence from those things on particular days of the year. This can seem arbitrary (why only on those days?) or just plain overly restrictive (why complete abstinence—can’t we be allowed a little of the naughty food or drink in question?). However, these rules can look surprisingly similar to modern diets, such as the recently popular ‘5:2’ diet in which adherents can eat freely for five days and then must eat only 25 percent of their normal food intake for two days. Or no-carb diets in which people voluntarily choose to avoid any carbohydrate foods such as bread. People find it easier and simpler to totally abstain from something than to moderate their consumption of it. In contrast, when consumers are stressed or their conscious, rational brains have been working hard, they are more likely to abandon self-control and want to treat themselves.

If you are promoting a healthy product or service, consider helping consumers kick their old bad habits by pointing out the benefits of total abstinence (or at least total abstinence for certain time periods). Or if you are promoting a treat or indulgent product or service, consider the times and places where people are most likely to be stressed or mentally tired.

*This article was originally published in 2016

• Neuromarketing 101: Inside the Science of Decision-Making
• How to Captivate Consumers With Multisensory Experiences
• Intelligent Events: Measurement, Wearables and Personalization