Roundup from Coachella: Brand Experiences in the Desert 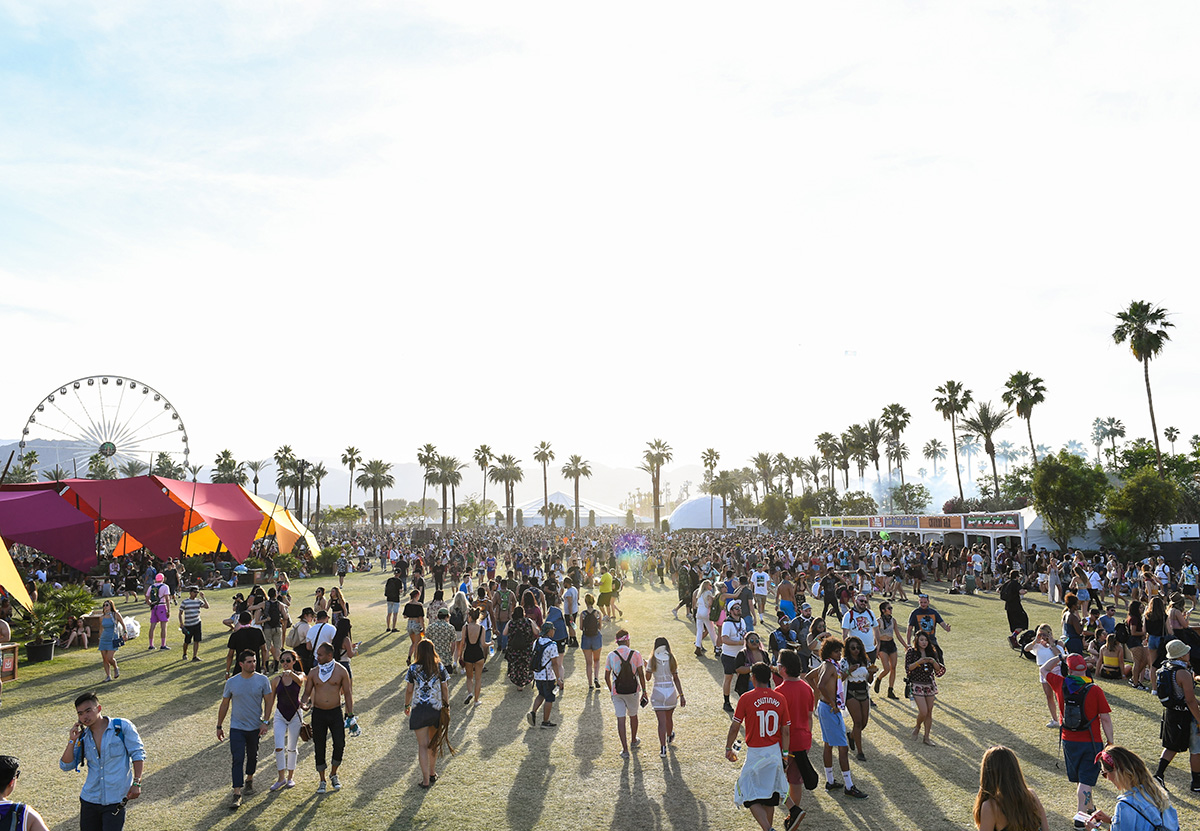 Coachella 2017 Roundup: Experiences in the Desert

Ahhhh… Coachella. It’s the hottest ticket in April taking place in the desert oasis of Indio, CA. Aside from the A-list musical talent and scenery, the festival has spawned fashion movements and is prime real estate for celebrity spotting. It’s also a hotspot for brand activation and ancillary events as marketers take advantage of the trendy target audiences and opportunities for lengthy engagement with festivalgoers. What were brands up to this year? Here’s a look at what went down at the Coachella Valley Music and Arts Festival, April 14-16 and April 21-23. 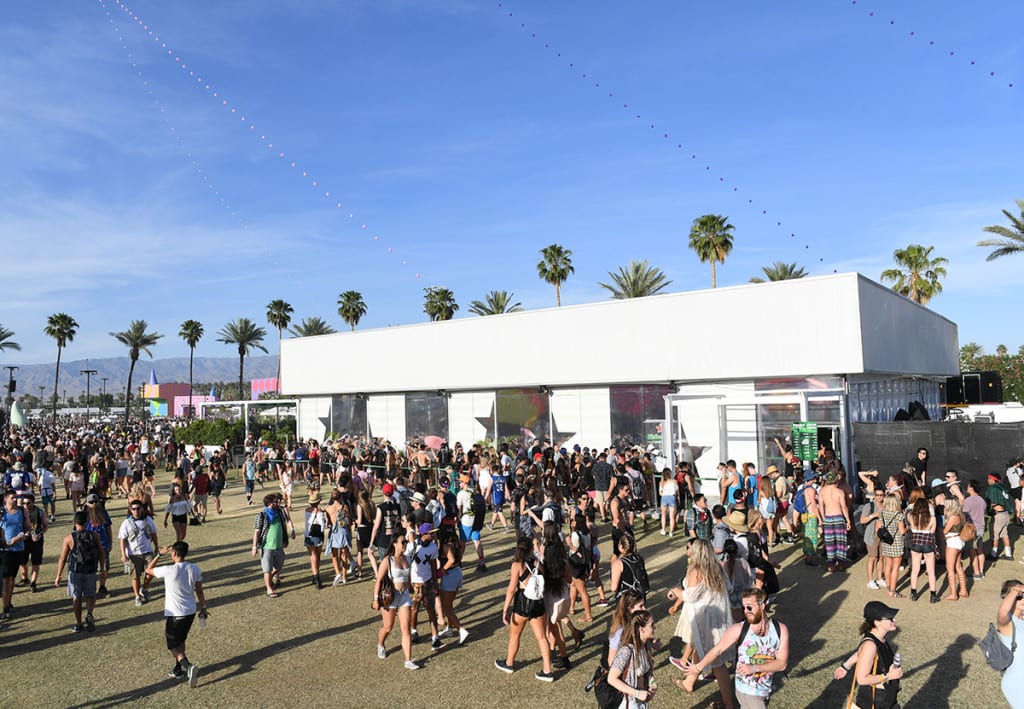 It wouldn’t be Coachella without Heineken house. For the past 16 years, the official malt beverage sponsor of the Coachella Valley Music and Arts Festival has activated festival experiences for consumers 21 and older. Over two weekends, Heineken House—an installation the brand has activated for four years—offered a bar and exclusive performances.

The sustainable dance floor returned this year, converting the kinetic energy created when attendees dance into electricity to power the LED lights on the floor. At a Digital Art Wall, consumers could create custom art with a stencil, or tag a selfie with a spray can, and then email their artwork as a souvenir or share it on social media.

New this year, Heineken hydrated through its “This One is on Us” initiative launched in the U.S. in March. Consumers visited a water bar in Heineken House to receive free cups of water throughout the festival—cups that conveniently fit on top of the Heineken bottle. What also returned this year: Heineken Cold Storage in the campgrounds, where campers’ cold beer was stored with the brand and then delivered directly to their campsites by messengers when they text requested it. Agency: Corso Agency.

Check out  360-video of George Clinton & The Parliament Funk

ASICS on April 14, the Friday before the first weekend of Coachella, tapped into the group running trend and offered Coachella attendees the perfect pre-festival workout—a morning hike with partner Cobra Fitness Club of Palm Springs. Targeted influencers were invited to register at the Ingleside Inn in Palm Springs where they were outfitted in ASICS workout gear including the brand’s DynaFlyte sneakers, bandanas and hats. They were then shuttled to Cobra Fitness Club where Mark “The Cobrasnake” Hunter, an avid ASICS fans, led a casual hike along the Tahquitz Canyon Trail.

The event allowed ASICS to expand its reach beyond its core long-distance-runner audience. “The landscape of marathons is changing and is more about the social components—runners getting together, running shorter distances, it’s a fun social activity—as opposed to competition and for personal records,” says Melinda Hutcheon, director-p.r. and sports marketing at ASCIS America. ASICS is embracing that, looking at the running culture as a whole while staying true to our core runner.”

The hike allowed ASICS to activate in a relevant way against a natural Coachella setting, serving up plenty of scenic amplification on social media. At the midway point of the normally dry hike, participants came across a waterfall flowing due to heavy rainfall in the region—a moment that lent itself to some hashtag worthy Instagram posts. Agency: BMF Media, New York City.

HP had festival-goers lined up to experience its 11,000-square-foot dome, “The Antarctic,” and the interactive engagements housed within the HP Lounge, a smaller dome where they could get hands-on with HP’s laptops, workstations and other high-tech doo-dads. As official technology sponsor of the festival, HP powered all Coachella festival registration with nearly 150 HP products. Nearly 100 HP products and accessories powered HP Coachella activations as well.

The HP Lounge was a smaller dome structure filled with activations where attendees could create and share their own original content. Among the engagements: designing and printing custom bandanas using the Windows Ink feature on HP’s new Pavilion x360 convertible PC; the chance to pose with photographer Eric Pare’s light sculptures in a 120-degree photo to share; “Light Ink,” where attendees designed a real-life kaleidoscope with the HP Inking Laser Show, created on HP’s Spectre x360 laptop; and the VA VR experience, where they could manipulate the displays in the Antarctic dome with the VR-enabled OMEN X desktop gaming rig. Agency: Infinity Marketing Team, Culver City, CA.

CHECK OUT THE HP DOME EXPERIENCE IN VR

While not exactly on-site at Coachella, Mountain Dew created quite a splash by taking over the Musicland Hotel, 45 minutes away in Palm Springs, with Dew-sponsored events that were free to the public. Besides a rockin’ good time, the takeover promoted two new “premium” varieties of its carbonated soda—the citrus-flavored White Label and apple/kiwi-flavored Green Label. Together, along with the Black Label berry-flavored soda that launched last year, the three comprise what the brand now calls its Mtn Dew Label Series.

But back to Musicland, or the Label Motel, as Dew fittingly renamed it. One of the rooms offered the DEW VR Beat Drop, a virtual reality experience that transported participants to a lounge party from which some of the participants appeared to parachute out of a military plane. There was also an interactive art installation by street artist Bradley Theodore. And, of course, music, in this case—an iHeart Radio concert pop-up with a guest appearance by dj Virgil Abloh. Attendees could also purchase Dew Label branded merchandise created by social media company VFiles, including t-shirts, crop tops, Hawaiian shirts, beach towels, bandanas and more, all while sampling the new Mts Dew Label Series flavors. A great way to create some “word of mouth.” 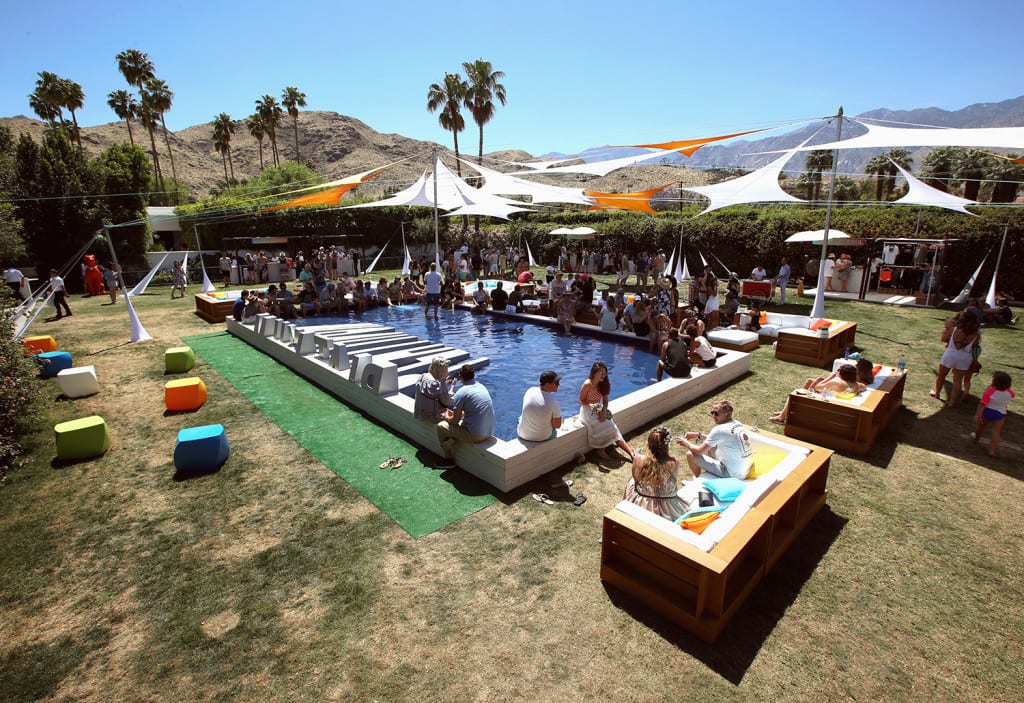 American Express returned as the official credit card of Coachella with an on-site activation for the masses and an off-site chill space for influencers and Platinum cardmembers.

On the festival grounds, attendees could participate in a first-of-its-kind robot-powered video activation inside a branded tent. There, music lovers had the opportunity to star in their own mini music video, then share the content across social media. The brand was also integrated into the official Coachella app. By signing into the app with their americanexpress.com ID and password and enrolling an eligible card, cardmembers unlocked surprise and delight perks, including a spend $10, get $10 back offer for those using American Express at participating Coachella merchants.

Outside the festival at The Parker Palm Springs hotel, celebrities, influencers and Platinum cardmembers could hang out between performances at the American Express Platinum House. Attendees were treated to SoulCycle classes led by Senior Master Instructor Stacey Griffith, a dj set by Hannah Bronfman and a private performance by singer-songwriter Bebe Rexha. There were also culinary treats like tacos, popsicles and vegetable skewers, and activations from outside brands like Sew Chic, which offered custom bandana making. And of course, like any savvy festival sponsor, the brand offered a flower crown-making station.

Cupcake marked its third year at the festival with shareable moments centered around wine-themed bites and a larger-than-life photo activation. The brand, which served as the official wine sponsor of Coachella, invited attendees to hang out by its bright yellow Cupcake Truck where they could snag “poptails” featuring fresh fruit-based popsicles submerged in one of the brand’s wine varietals. The truck itself featured an art installation on one side, where festival photos from Instagram­ or Twitter tagged with #sharethejoy popped up intermittently.

The footprint additionally included a small, covered porch area, rustic wine barrels where attendees could sip and socialize, a digital wine trivia competition and a GIF photo op. The photo engagement featured an oversized wine bottle that festivalgoers could actually step inside, along with bubbles and a Coachella-themed backdrop. Cupcake again invited participants to #sharethejoy by posting their photos to social media. And for music fans that couldn’t make it to the festival, the brand offered live coverage of the event on social media with the help of influencers. Agency: MKTG, Atlanta.