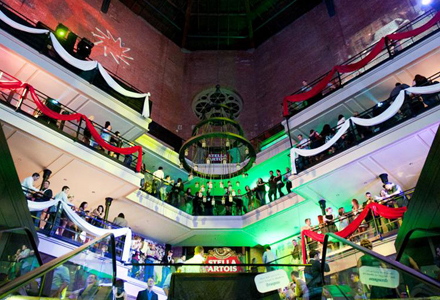 Last Friday a crowd of approximately 700 attended the Stella Artois Draught Master Championship Event at Boston’s Liberty Hotel. Constructed in 1851 and formerly the Charles Street Jail prior to a $150 million renovation, the venue’s finely preserved panopticon structure made for a night of multi-level interactive experiences and high-level brand engagement—all within view of other event-goers.

An upscale, vintage 1960s theme was consistent throughout, beginning with a red carpet arrival and a paparazzi-style photograph taken with a backdrop of Italian Vespa scooters. Guests ascended the escalator and were greeted by girls in vintage garb handing out coaster-shaped guides to the event’s five levels of experiences, which included a step and repeat photo wall; a Twitter Fountain with logged-in laptops and a fan voting station; a draught station for learning the nine-step Stella pouring ritual performed in the evening’s competition; a private VIP level with passed hors d’oeuvres; and a screening of the recent Sundance Film Festival documentary entry “Up There,” a tribute to the dying craft of hand-painted wall advertising.

The hour-long competition, which took place midway through the five-hour event, brought together 16 regional finalists competing to master Stella’s nine-step pouring ritual. Images of contestants were projected onto large screens and their technique was judged by beer and beverage experts and the reigning World Draught Master. Scores for each stage of the pour were reflected in real-time on the screens and announced by a dapper MC, also dressed in 60’s-era styles.
Though now in its 14th year, for the first time the U.S. competition was open to consumer contestants rather than just bartenders—an initiative designed to enhance the brand’s relationship with consumers.

According to brand manager for Stella Artois Paul Byrne, the idea developed from conversations with consumers who expressed interest—during promotions and sponsorships at various events throughout the year—in learning the nine-step pour ritual. “Most people haven’t been able to get behind the bar and pull the tap, so when we began educating them the response was very positive. The most important thing about the brand is that the product is poured properly and served in our Chalice glassware—we want our customers to have that experience.” Agency: Mosaic, Chicago.