WE tv Says 'I Do' to the Bridezillas Museum 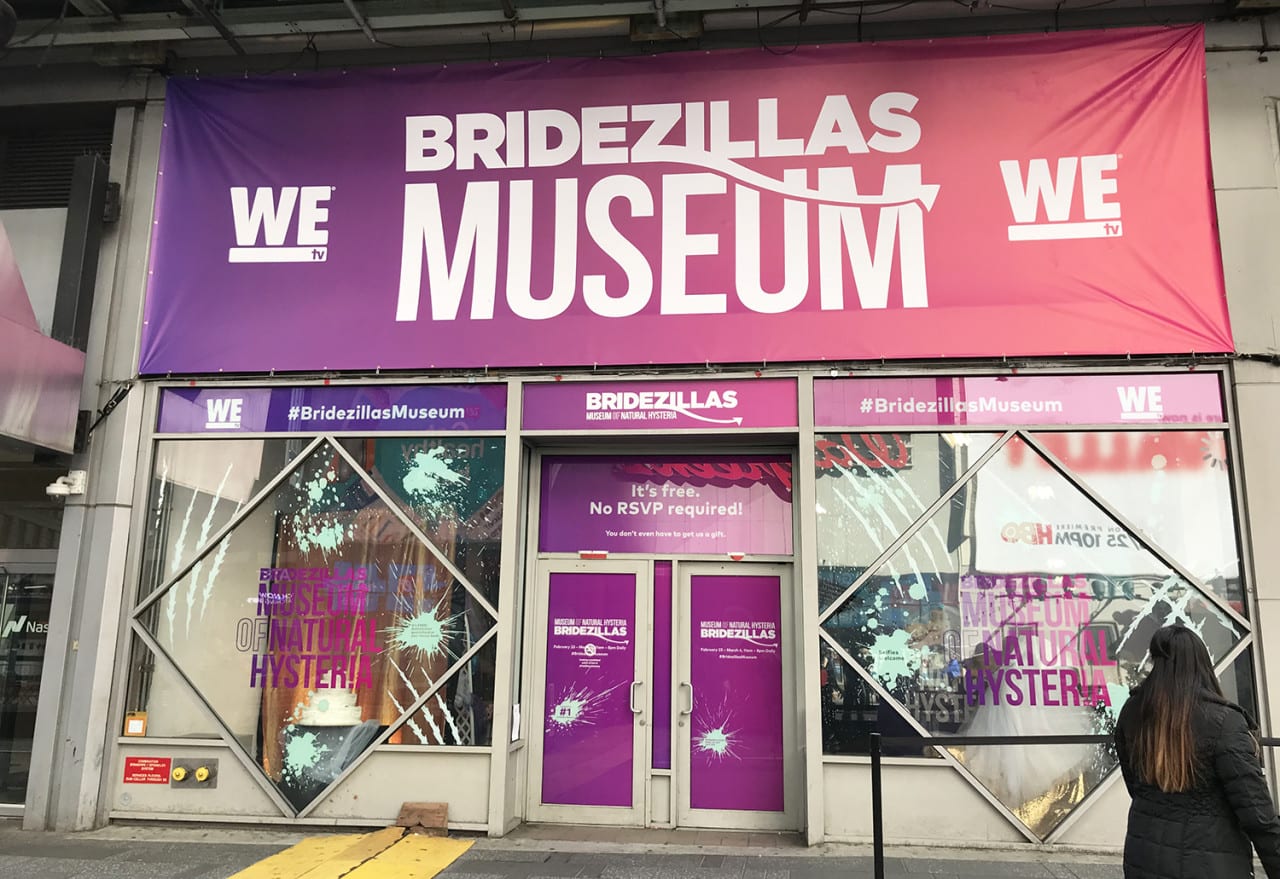 For nine years, the docuseries “Bridezillas” on WE tv introduced the world to the cultural phenomenon of brides-to-be making over-the-top wedding plans and demands and, in general, losing their shit before their big day. So, when fans demanded a reboot, the network delivered, and to drive tune-in to the premiere of “Bridezillas” on March 2, WE tv put the phenomenon on display with the Bridezillas Museum (of Natural Hysteria), located in an empty space smack dab in the middle of Times Square in Manhattan.

Blending in with the tourist attractions of New York City’s busiest intersection, the storefront next to H&M featured signage promoting the museum, which was open Feb. 22 through March 4. An animatronic tyrannosaurus rex wearing a wedding gown and veil loomed in the window.

“There are people who were at the museum who didn’t even know it was a show,” says Rosie Pisani, evp-marketing and brand at WE tv. “’Bridezillas’ has transcended pop culture to the degree that it’s a thing, it’s in the dictionary, it’s a real phenomenon, and so for us, it was about embracing that, taking advantage of the fun sentiment and then at the back end of it saying, ‘You have to watch this show.’”

Described as “Museum of Ice Cream meets 29Rooms meets ‘Scream Queens,’” we had to see this latest example in the Instagram museum trend for ourselves. Read on for a play-by-play of the experience.

The experience began with a run-in of two actresses dressed in gaudy wedding dresses, pushing passersby to go and visit this free museum—after all, there aren’t many free things to do in the city, which may have accounted for all the repeat visitors WE tv reported. Additional doses of engagement for the network’s new and existing fans? Nice.

After walking through the doors, we were greeted by a maître d’ who handed us a candy Ring Pop and the kind of guide you would receive at any museum to help us navigate through the different attractions.

First up on our journey was the “PreHysterical Bridezillas Through History” exhibit detailing famous bridezillas, like Hera, Goddess of Marriage and her tumultuous relationship with Zeus, Eve, Cleopatra, and so on. The final exhibit in this space was a framed mirror with a “Bridezilla of the Year” placard, allowing us to picture ourselves as a history-making bride.

Next up was the “Wedding DisBelieve It or Knot” exhibit that offered a tour of unbelievable facts on brides across the world and photographs (like the largest wedding dress train, which was five miles long) as well as memorabilia from famous “Bridezillas” episodes in glass cases, like the tackiest wedding invitation ever featured in the series and the most ridiculous wedding nails.

From there, we visited “The Worst Bridesmaid Dresses in History” exhibit, featuring three actual bridesmaid dresses featured on the show and a tablet next to them allowing us to vote on our least favorite with a simple tap and swipe.

There were plenty of opportunities to view “Bridezillas” in action with a mosaic of screens displaying content from the new season, and a single screen with headphones and wedding veils attached to them that allowed us to watch the trailer with undivided attention. Along the walls, unbelievable quote graphics from the show, like “Your daughter isn’t cute enough to be the flower girl” and “I have no problem making you cry.” 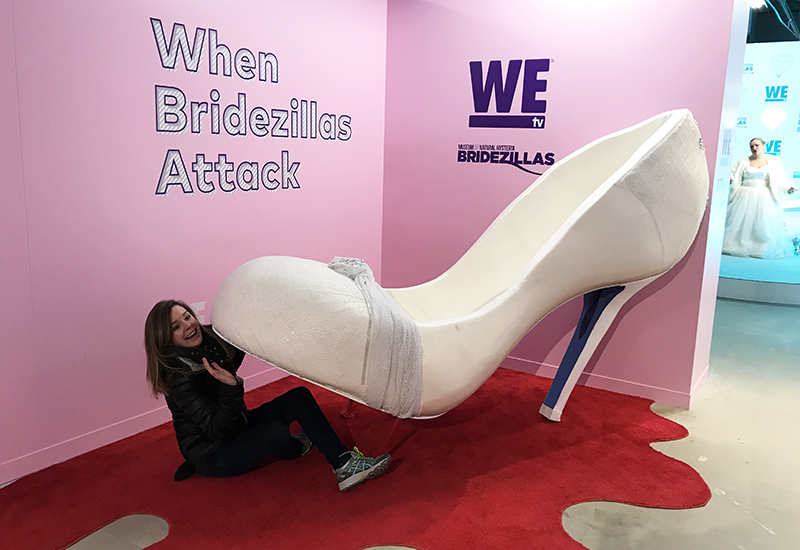 A “When Bridezillas Attack: Get Crushed By a Bridezilla” engagement served as one of several photo moments.

WE tv rewarded attendees for posting to Instagram with a giveaway every day. By posting shots from the experience and tagging @WEtv along with the #bridezillasmuseum hashtag, consumers had a chance to win a $250 Amazon gift card.

Among the photo ops: “When Bridezillas Attack: Get Crushed By a Bridezilla,” which featured a larger-than-life wedding stiletto that we curled up under to simulate being crushed by an angry bride. Over in the next room, a fancy pedestal bathtub filled with fake diamonds that we climbed into for a “million-dollar” photo op against a step-and-repeat backdrop of diamond projections, WE tv logos and “Bridezillas” messaging.

The back of the museum offered good, old-fashioned interactives, like a branded arcade “Wedding Favor Claw Machine” with the tagline “To have and to try and hold” filled with plush candy hearts, monsters and dinosaurs and… get this… a few signature blue boxes tied with white ribbon from Tiffany & Co. containing gift cards to the jewelry store. Three gold coins gave you three chances to win. We tried… and we like to think we loosened a Tiffany box for one lucky consumer.

We could then test our vocal chords in the “Tantrum Tank: Scream Like a True Bridezilla.” This soundproof space allowed consumers to record their loudest tantrum, which it then ranked among the most offending wedding instigators like, “Caterer’s snide comment” and “Ungrateful bridesmaid’s rant.” You could further test your rage on the “Rage-O-Meter” classic carnival game, with a punching ball that recorded your level of anger from “Agitated Angel” to “Full-Blown, Ballistic Bridezilla.”

Of course, being a bridezilla is pretty exhausting, so we took a seat in the “Cray-Cray-Nial Massage Zone” and put on a helmet that massaged our temples.

Rounding out the experience was a colorful backdrop worthy of a group photo moment—or in our case, a hands-on-hip solo moment—an ivy wall with flowers spelling out “CRAY.” Then, a tour of “Products That Don’t Exist, But Probably Should” with fake framed advertisements for things like The Brass Knuckle Diamond Ring and Bridal Party Shock Collar.

And to close out the tour, a photo under a tacky wedding ceremony arbor, complete with neon lighting and props. We do…  Oh, we definitely do. Agency: BeCore, Los Angeles.

Say ‘Yes’ to a Tour of the Bridezillas Museum:

• Engaged: How Three Brands are Disrupting the $50 Billion Wedding Industry