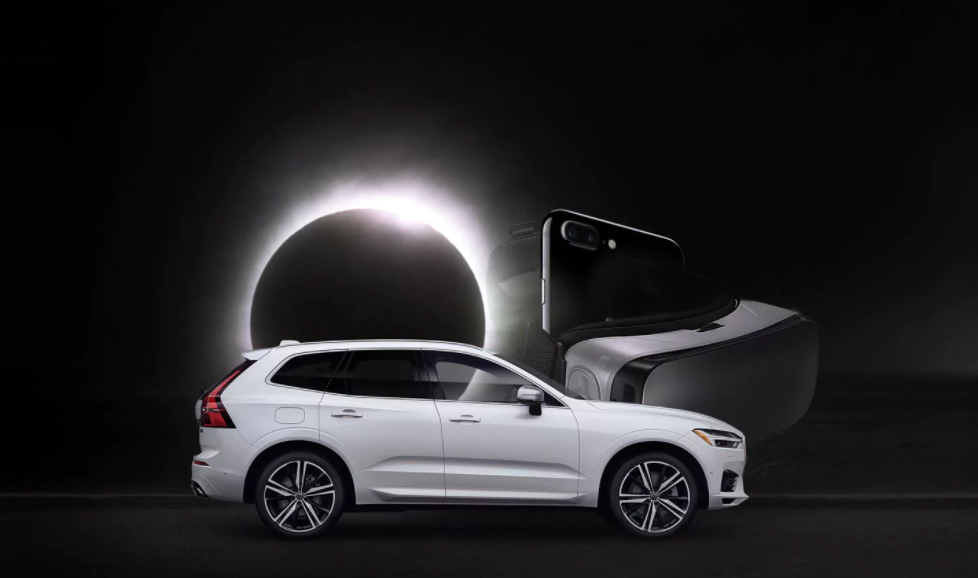 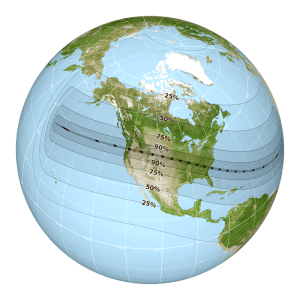 Brands are taking advantage of the “Path of Totality” for the total solar eclipse. (Image: NASA)

Many people won’t know exactly what to expect on Monday, Aug. 21, when the total solar eclipse makes its way across the U.S. We’ve been told that birds will stop chirping, the temperature will go down, the land will darken. Shards of sunlight, the ones we’re not supposed to look at with our naked eye, will pierce the sky from behind the moon. There also are marketing activations on the horizon that are sure to brighten the landscape.

Volvo, for example, wanted to align with the total solar eclipse when it discovered that Charleston, SC, where it is building a new plant, is smack dab in the sun’s “Path of Totality,” that 70-mile wide swath across the U.S. where the solar eclipse will be most visible. So, as part of its XC60 launch campaign, the Swedish automaker teamed up with CNN to deliver the experience around the world in 360-degree video and in 4K virtual reality.

CNN will live stream the solar eclipse on its digital and social properties. Four of the live streams will feature branded content for Volvo and integrate 2018 Volvo XC60s specially outfitted with advanced 360-degree cameras. Volvo filming will begin at 11:28 AM (MT), in Snake River, ID, with narration by explorer Richard Wiese. The second spot, at 1:02 PM (CT) is in Beatrice, NE, with author Andrew Weir; then Blackwell, MO, at 1:16 PM (CT) with retired NASA astronaut Cady Coleman and finally, Charleston at 2:46 PM (ET), the site of Volvo’s new manufacturing facility, with Egyptologist Kara Cooney. Volvo’s website, racingthesun.com, serves as a base for information on the CNN partnership and the solar eclipse. (Agencies: Grey; Mindshare; Courageous; New York City).

A 360-degree video camera in the XC60 will live stream the experts’ conversations, while a full 4K VR camera captures footage outside the vehicle. “You will be able to experience the car as if you are there as a passenger, and then as you get out, you’ll be able to experience the eclipse through the high-end 4K VR camera situated outside,” says John Militello, director-marketing at Volvo. The brand also has developed a custom eclipse viewer with a magnetized frame that attached to the XC60’s roof.

For Militello, teaming up with CNN and the solar eclipse is a natural fit in many ways, because of the panoramic sunroof on most Volvo vehicles, its history of leveraging 360-degree video in its marketing and, as he says, “We’re a brand that puts people first.”

“We want to make advertising and marketing that brings something to people rather than us shouting our message to them,” Militello says. “That allows us to use the vehicle as a frame, as a natural character in the story, without overselling it, bringing value and innovation as well as showing off the technology in our vehicles. It’s a magical experience.”

Besides Volvo, other brands have hopped on the total solar eclipse bandwagon. Here’s a rundown of what some of them have in store:

The Weather Channel will offer augmented reality coverage of the solar eclipse and has teamed up with Royal Caribbean to cover the event at sea and Alaska Airlines in a flight that will follow the eclipse’s path. The cruise line is hosting a seven-night excursion on its Oasis of the Seas ship, which will sail to the optimal spot at sea to witness the eclipse. The Total Eclipse Cruise features parties, a live concert, lectures and other activities.

Mattress company Casper on Aug. 20-21 will set up camp, of course, in Casper, WY, which is directly in the “Path of Totality” and has been sold out of hotel accommodations years in advance. Those lucky enough to score tickets to Camp Casper will sleep in luxury tents outfitted with Casper mattresses, complimentary food and drink, shuttle service to and from the site, movie screenings and more.

Chiquita Brands, the banana people, capitalizing on the two moments before and after the total solar eclipse when the sun will take on the appearance of a giant banana in the sky, on Aug. 20 will create a glowing “Big Banana” installation near the Flatiron Building in New York City and will distribute banana-shaped solar eclipse viewing glasses there and online. The brand also has launched a series of web films to introduce the ‘banana sun” and a website, the bananasun.com, as a hub for its activations. 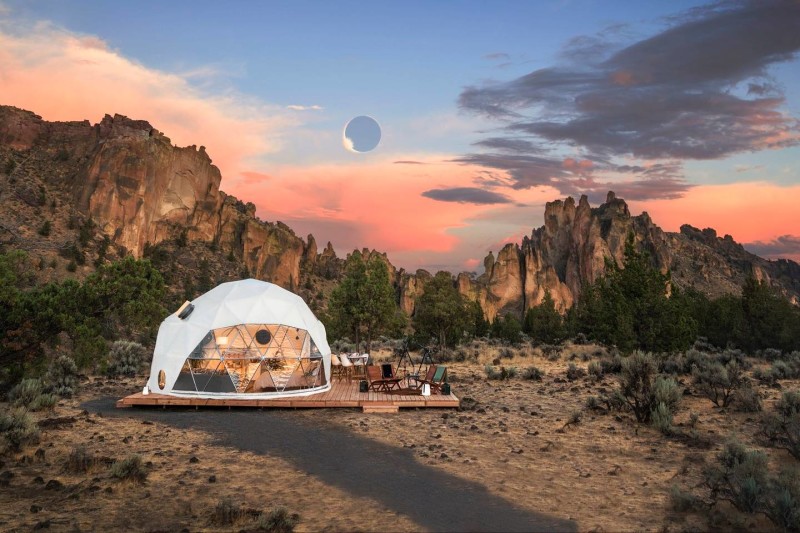 Airbnb and National Geographic have partnered in a contest that awards a night of stargazing before the solar eclipse from a geodesic dome equipped with telescopes set up in the Oregon wilderness. (Photo Courtesy: Airbnb/Chris Burkard)

And then there’s Mitsubishi, exclusive sponsor of ABC News’ “The Great American Eclipse,” which will air, instead of the network’s usual programming, from 1-3 p.m. The automaker will roll out its aptly named new Eclipse Cross model into New York City’s Times Square during “Good Morning America” on Aug. 21 and will send photographers to Salem, OR, in an attempt to get a shot of the Eclipse alongside of the actual eclipse. Cosmic.