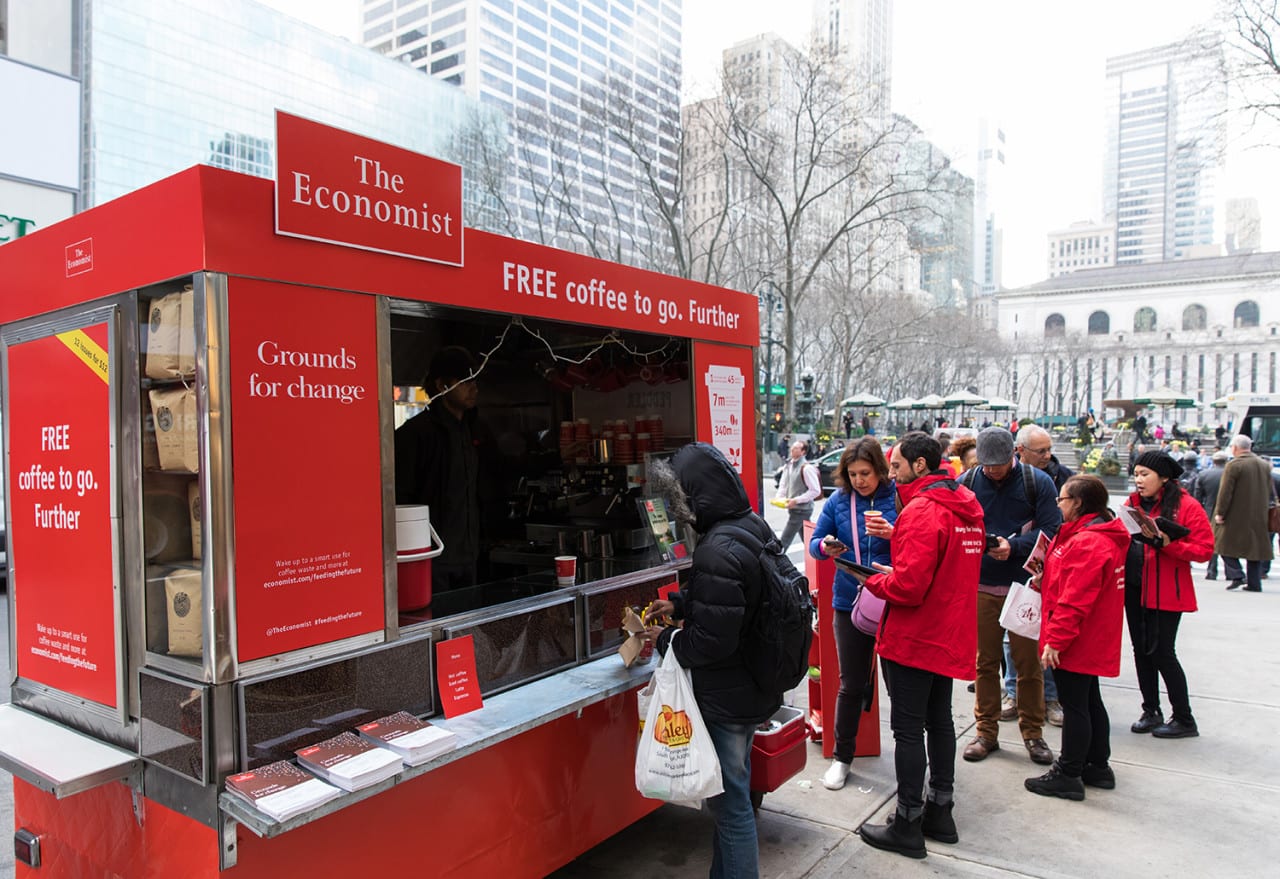 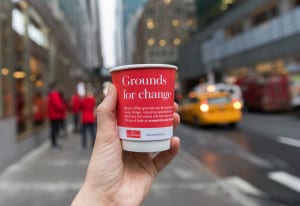 The Economist offered passersby a free cup of coffee made from used grounds—and some food for thought.

Ahhh… coffee. It’s the lifeblood of most Americans for obvious reasons (caffeine). The majority of consumers, however, don’t know that biodiesel made from used coffee grounds is comparable to the best biodiesels on the market. In an effort to spread the word, The Economist in April and May took its “mind-stretching journalism” to the streets in five cities with a branded coffee cart and a mission to highlight the impact of food waste on the environment.

Dubbed “Grounds for Change,” the premise for the program was based on The Economist’s report, “Oil in Your Coffee,” which identifies little-known uses for coffee grounds, including creating biodiesel fuel without depleting valuable resources like plants or land. So, to get consumers to wake up and smell the sustainability solution, The Economist set up a coffee cart at select locations across New York City to offer passersby a free cup of coffee made from used grounds—and some food for thought.

Upon receiving their free cup of joe, consumers were presented with a tablet and asked how they’d like to recycle the coffee grounds used to make their beverage (garden compost or mushroom growing kit). They were also educated on unique and sustainable ways to use coffee grounds, from skin exfoliation to renewable energy. Consumers who participated in the activation were also offered an introductory subscription rate of 12 weeks for $12. Those who subscribed on-site could choose to take home a notebook, or have a tree planted in partnership with Tree-Nation. Following The Economist’s New York activations, the publication made its way to Boston, Philadelphia, San Francisco and Washington, D.C.

Grounds for Change was part of The Economist’s broader #feedingthefuture campaign, which serves as part of the brand’s “live content marketing” strategy aimed at attracting new readers through provocative experiences. Previous activations included dishing out smoothies made with “ugly fruit,” which is perfectly edible but often discarded due to its appearance, and ice cream topped with insects to highlight lesser-known, sustainable sources of protein. In addition to boosting readership, the ongoing campaign aims to get consumers thinking more about environmentally sustainable approaches to food production and consumption.

“We are set to double the amount of subscriptions that we brought in for the previous year through experiential alone. I think it’s really important that not only are we trying to send this message, we also want people to come in and subscribe because we do have that ‘mind-stretching journalism’ and we do highlight the critical global questions and possible solutions,” says Yanna Wilson-Fischer, director-North America marketing and global experiential at The Economist. “Even coffee is so simple—so many people consume coffee every single day. And [we asked] what if we collected all those grounds and did something with them? How would that change energy in North America? And how can we take something we do every single day and contribute that to the greater good? It’s as simple as that; we’re just bringing more attention to it.” Agency: Sense, New York City.

• What Happened to ‘Going Green’ in Events?
• Bigelow Mobile Tour Takes Tea Time on the Road