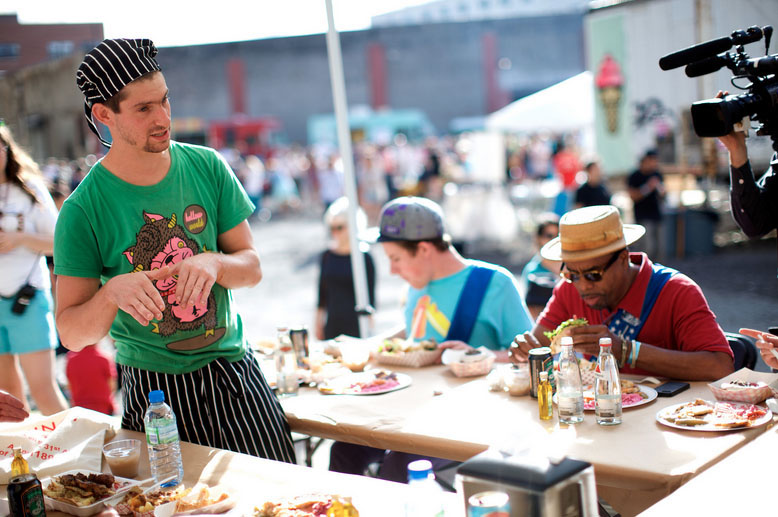 Mobile tours are hitting the road, musical festivals are tuning up and, well, most eyes are on the World Cup. But if you’re looking for an escape from the expected this summer, we’ve got a few events worth a second glance. The first capitalizes on a click-bait-worthy trend with an artful twist; the second, on the eternally-hot food truck craze; and the last, on the spirit of an urban beach community with a ton of history. Don’t mistake these offbeat events for being undiscovered—they each have impressive and highly desirable followings. But just a handful of major sponsors are taking note. Will you be next?

Where and When: Minneapolis, MN, on Aug. 14
Who puts it on: The Walker Art Center, a nonprofit museum
What is it: A film festival of 80-plus curated entries with an awards ceremony featuring the coveted Golden Kitty award. But, this year the film festival is actually going on a tour being programmed by cat video producer Will Braden, creator of the infamous Henri Le Chat Noir videos. Nice.
What happens: Cat videos have outgrown the “hot trend” category and have ballooned into a bona fide market. Purina’s Friskies has its “The Friskies” live web-based cat video awards. Fresh Step has its high brow Catdance Festival. In August 2012, Walker Art Center decided the act of watching cats take baths and flip around a room should be a community-building event. And it’s evolving steadily. In addition to the film viewing and awards, there are “celebricat” appearances (Keyboard Cat, Lil Bub and Grumpy Cat, among them), live art projects (a huge butter cat sculpture, among them), and booths hosted by local animal nonprofits. Last year, L.A.-based Funny or Die sponsored a silent disco party. Animal Planet is serving as lead sponsor this year; supporting sponsors are Chuck & Don’s and Target.
More: walkerart.org/calendar/2014/internet-cat-video-festival-2014

Where and When: Takes place in five cities from spring through late summer—New Orleans (took place April 3), Philadelphia (took place June 14), Los Angeles (June 28) New York City (Sept. 13), Chicago (TBD)
Who puts it on: Street Vendor Project, a nonprofit legal resource for vendors
What is it: A multi-city ticketed alternative foodie and fund-raising event designed to celebrate street vendors and urban food culture
What happens: A whole lotta eating. But before that, an online public nomination process leads up to the event, where vendor finalists arrive with carts and trucks and prepare their best eats for attendees and judges. Attendees purchase tickets online or at the door and spend the afternoon socializing, tasting, and listening to live music and performances. At the end of the day, there is a ceremony that names winners for Vendy Cup, People’s Taste and Finalists. The event debuted in a garage in 2005 with 150 attendees. In 2013-14, across cities, attendance is estimated at 5,000. The event’s recognition as snowballed, too. In fact, Chef Mario Batali called it the “Oscar’s of street food.” What’s cool, too—venues are purposefully adventurous and range from gritty industrial settings to parks in up-and-coming neighborhoods. National sponsors this year include Samuel Adams, State Farm, Uber and Yelp. Check out photos from last year’s New York event here.
More: vendyawards.streetvendor.org

Where and When: Coney Island, Brooklyn, NY, this year on Saturday, June 21
Who puts it on: Coney Island, USA, a local multi-arts organization
What is it: More than 1,500 participants from the five boroughs create floats and costumes (body paint, pasties… or not, included) and then march, dance and skate along the main avenue lined with spectators.
What happens: There is more to Coney Island than the Nathan’s Fourth of July hotdog-eating extravaganza. This parade proves it. This celebration of art, of “high and low culture,” of “ancient mythology and honky-tonk rituals of the seaside” and straight-up eccentricity has kicked off the summer season now for 30 years. There are categories of costumes, but most involve sparkling mermaids, sea creatures, kings and captains. The parade lasts about three hours (and then there are the after parties) and in 2013, had its largest attendance yet with 750,000 spectators. National sponsors this year: Coca-Cola, Pabst Blue Ribbon, Sparkling Ice and Zipcar. We couldn’t miss this one. Check out our detailed coverage and video from last year’s parade.
More: coneyisland.com/programs/mermaid-parade