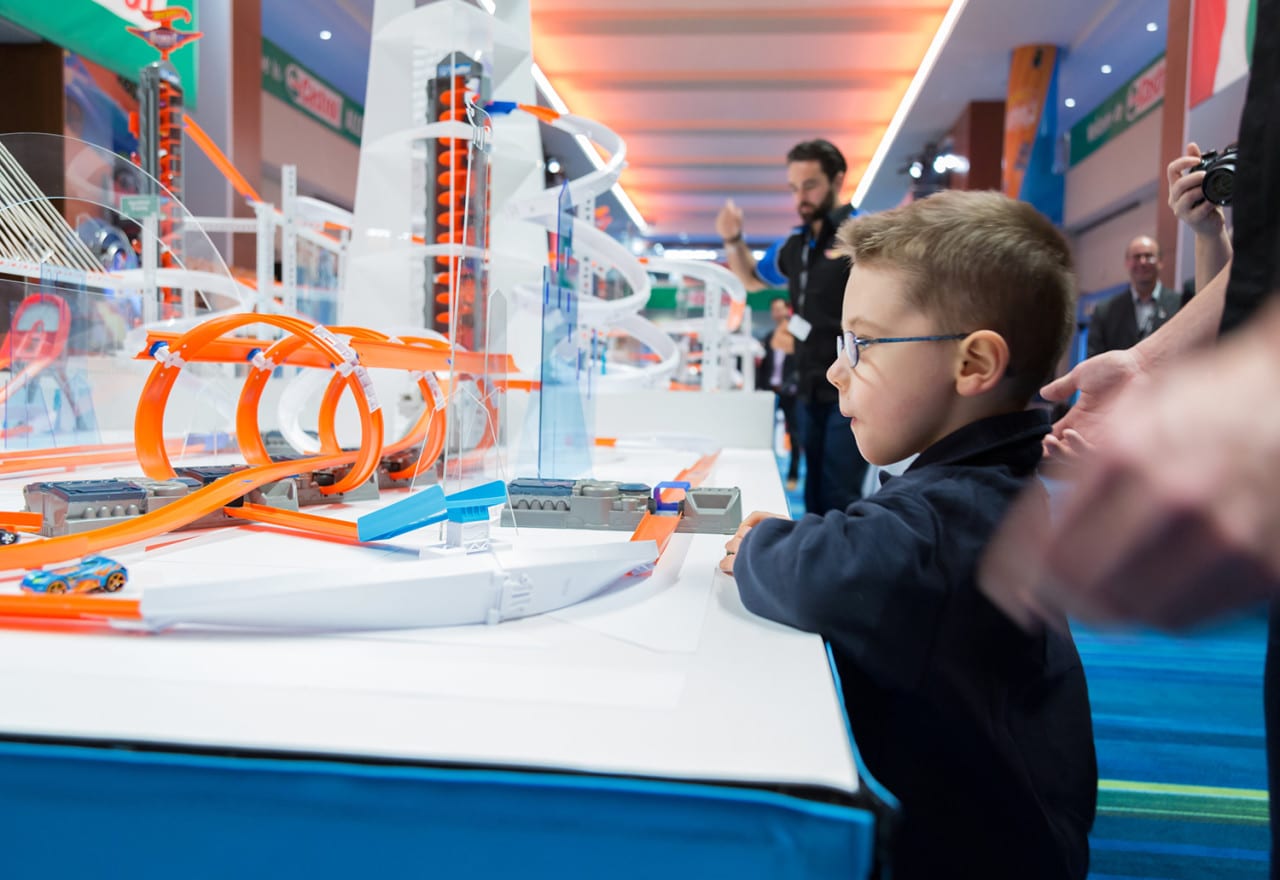 To celebrate its 50th anniversary and remain top of mind among electronics-loving kids and adults after the holiday toy season, Hot Wheels drove its “challenge accepted” brand message to the Canadian International Autoshow. The Mattel brand and producer of toy cars and tracks took over the seventh floor of the Metro Toronto Convention Center, Feb. 16-25, with multiple engagements for car fans. As part of a new campaign launched last fall, Hot Wheels wanted to show kids and their parents how the toy is educational, and teaches things like speed, gravity and using your imagination.

Inside the exhibit were six life-sized Hot Wheels-inspired vehicles, including a Darth Vader car and 1976 Chevrolet Camaro RS (among the “Sweet 16” of die-cast models that first came out 50 years ago). The space also included Toronto’s “largest super track”—a 20-foot by 40-foot track custom-built for the show that featured 320 feet of track with loops, humps, a nine-foot steam tower, elevators and different landscapes inspired by regions in Canada.

Other activities included a social media giveaway, where if consumers posted an image from the experience with #HotWheels50 and #ChallengeAccepted, and tagged the brand, they would receive a die-cast model from a brand ambassador. Consumers could also submit their very own die-cast design, either physically or online at hotwheelschallenge.ca. The brand will pick one winner, and produce the design, package it and ship it to the creator. There was also a Play Zone for kids to build their own tracks and a Collector’s Zone packed with more than 500 die-cast Hot Wheels models—this space played host to a special collector’s meetup on Feb. 20, where top collectors from around the world were invited to showcase their models.

To sprinkle its presence all over the convention center, however, Hot Wheels partnered with car brands, like BMW, Hyundai and Mercedes, on signage that displayed how each brand has partnered with Hot Wheels to produce die-casts of their vehicle models over the years.

“When you look at all the other partners and manufactures and brands at the auto show, there’s not really that one family brand per se, and so for us, being there is a no brainer,” says Akram Sharkway, brand and communications marketing manager for Hot Wheels at Mattel. “We’re tapping into the kids who are just starting their collections as well as engaging the older fan collectors who’ve been collecting with us for 30, 40 and 50 years.” Agency: The T1 Agency, Toronto.