How Espolon Tequila Wins Over Bartenders with ‘Cocktail Fights’ and Costumes

Cocktail-loving consumers in bars today are faced with a multitude of spirits to choose from. So, for beverage brands like Espolon Tequila, it’s critical to stand out on the shelf. A tried-and-true way to do that is through bartender advocacy—because if the bartender is excited about it, you’re drinking it. Enter: Espolon Tequila’s “Cocktail Fights,” a nationwide bartender competition that took place, for its fifth year, on Nov. 19 at the Gramercy Theater in New York City.

Inspired by Mexico’s Lucha Libre wrestling culture, the grand finale event of the program featured 13 regional champions from cities across the country. Each regional champ was a duo pushing its own cocktail recipe while wearing a themed costume, from Dia de los Muertos to Super Mario Bros. to a ridiculously good looking pair of Balls Models from the movie “Zoolander.”

“We were looking for a way to get trade and bartenders excited about our brands in a very Espolon way,” says Marie Christofferson, trade engagement manager for Campari. “There’s a ton of bar competitions on the landscape, but a lot of them are very serious. We’re a quirky, irreverent brand, so we decided to host a cocktail competition that doesn’t take the competition too seriously.”

The brand bills itself as “tequila for the people,” which translated to an event that was approachable and unpretentious while still being highly competitive. The on-stage competition kicked off with a dramatic, choreographed introduction performed by each team that explained their chosen theme, followed by the creation of the cocktail they entered the competition with.

Entertainment value and presentation played a role in the scoring, so the teams really hammed it up for the four judges. For the semifinal round, the remaining four teams spun a “flavor wheel” to determine the profile of the next drink they needed to make after an allotted one minute of prep time. And for the finals, two teams were challenged by the judges to create versions of a classic tequila cocktail with a couple tweaks added, like “a little less sweet” or “spicy, but not too spicy,” to up the ante.

“It’s about bartenders getting on stage and having fun first and foremost, but also making delicious cocktails, engaging with our brands and our teams and, by the end of it, understanding our product story and what our liquid is all about,” says Christofferson. 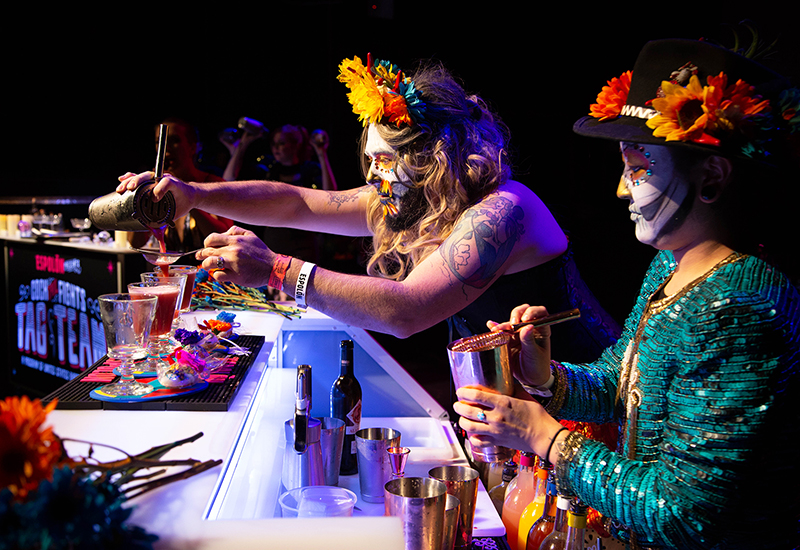 New this year was the tag-team approach, which doubled the amount of bartenders on stage and grew the event’s size organically. It’s also increased ROI for the event. The Espolon team used several metrics to gauge success of the program: the total number of people who submit to be in a “fight,” as well as the total number of attendees at the finale and the regional battles. Outside of that initial barometer, the brand logs everyone who competes in the contest, including the bar or restaurant they work at, to track sales data at those establishments.

“We generally see that for all participants there is a lift immediately after they’ve participated in the event, at the retail level as well as new points of distribution. They’re adding new Espolon labels to their back bar that they didn’t carry before,” says Christofferson. “We also look to see if anyone that’s participated outperforms the balance of the market, which generally is true.”

Beyond the sheer entertainment value of the Super Mario Bros. battling “Zoolander,” the more than 500 attendees at the finale had other activities to partake in. Throughout the show they placed bets on teams through a “bookie” at an odds table, and played dice games, Three-card Monte and a game of Plinko using fake branded currency received at the front door. The chips could then be exchanged for Espolon-branded t-shirts, hoodies, beanies, tank tops and towels at a swag store.

A GIF photo booth with calaveras (a graphic representation of a human skull during Dia de los Muertos that also decorates Espolon packaging) and other props added a social component, and a taco buffet rounded out the event’s touchpoints. Attendees also voted for a fan favorite throughout the night using a text-to-vote feature that was explained to guests through a handout given at entry. Agency: BFG, Hilton Head, SC.