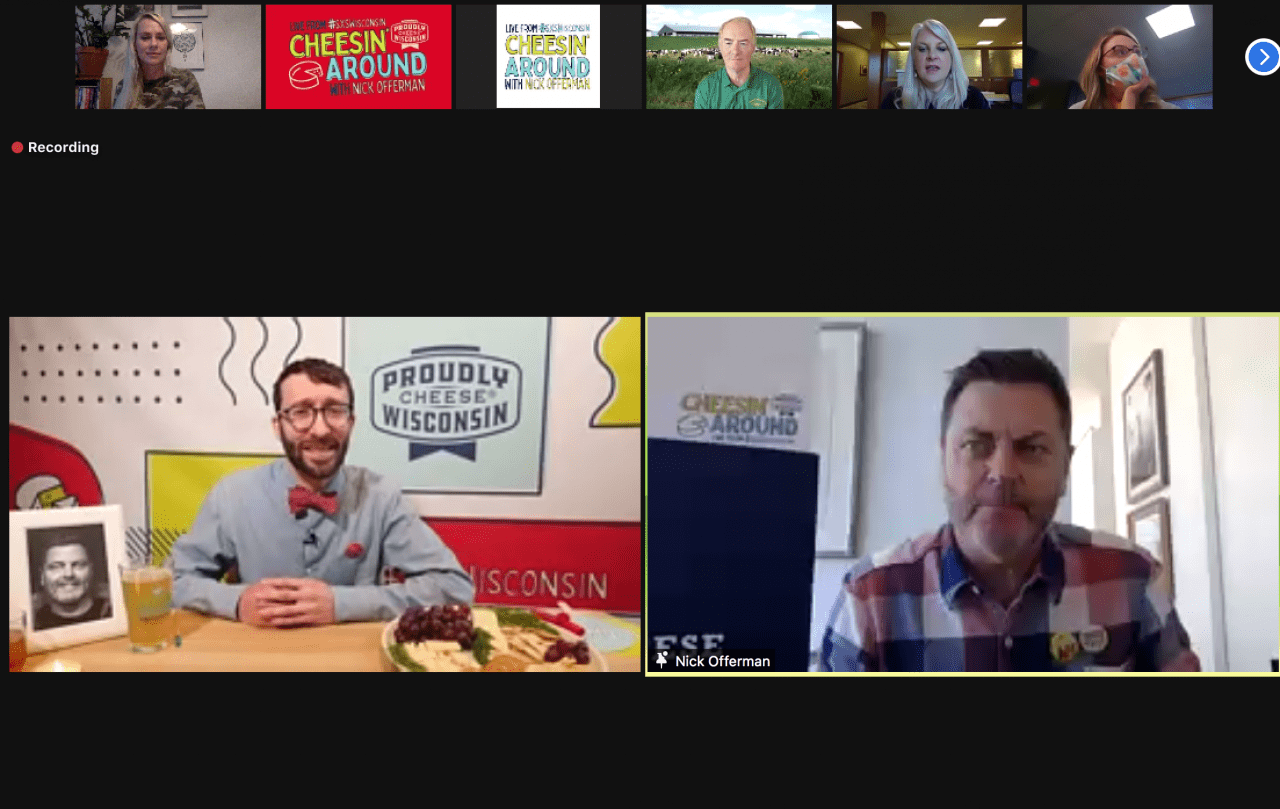 When Wisconsin Cheese activates at SXSW, the brand goes big. Real big. In 2018, it built the world’s largest cheese board, spanning 70 feet and featuring more than 2,000 pounds and 100 different types of cheese, all made with Wisconsin milk. The following year it kicked off a national pop-up tour at the festival and originated a new community of Wisconsin Cheese fans called Cheeselandia. And of course, 2020 was a bust thanks to the pandemic.

So when SXSW announced it would hold an all-digital festival for 2021, Wisconsin Cheese knew it couldn’t disappoint its fans. Furthermore, grocery stores had stopped doing cheese tastings during the pandemic, which meant that a virtual sampling event was the only way to drive trial.

The solution was “Cheesin’ Around with Nick Offerman,” a highly interactive, Zoom cheese tasting attended live by “Parks and Recreation” star and Midwest native Nick Offerman, complete with celebrity cameos, trivia for prizes, interviews with cheesemakers, musical performances and personalized cheese boxes for the first 2,021 ticketed attendees who registered for one of the three, 30-minute sampling events on March 18.

“As soon it was announced they were doing a virtual SXSW, people began to say things like, ‘Now if only I could get that giant cheese table in my living room,’ or, ‘I’m going to miss the cheese,’” says Wisconsin Cheese cmo Suzanne Fanning. “So we said, let’s throw a giant SXSW party for all the attendees—and show them that we could make this whole virtual thing work.”

The key to getting people to buy cheese is to let them taste it. And beyond the brand’s sampling objective, Wisconsin Cheese wanted to drive conversation, share of voice and earned p.r.—particularly since advertising budgets are tight. The brand also hoped to engage and excite its most loyal fans, the members of Cheeselandia.

Luckily, the brand had been doing virtual events for the Cheeselandia community every month, so the team wasn’t starting from scratch for SXSW. Making it engaging for attendees, however, required personalization and participation.

“We’ve found with our virtual events in general that we still have to make people feel special,” Fanning says. “We didn’t want to send out a generic box and have an event, like a webinar, that people just tune into. From the very beginning, we said we have to personalize this event as much as possible and let people participate.”

The personalization process began with a series of questions posed to attendees after they signed up, which ranged from indicating their favorite type of cheese to confessing their guilty pleasures. Choices for the latter included ‘90s boy bands and series like “RuPaul’s Drag Race.” The team then used the responses to personalize direct mail cheese kits and create an agenda for the virtual experience.

Each box featured the attendee’s favorite kind of cheese (such as Gouda) in addition to two other kinds, a personalized welcome, and a postcard to inspire social posts. When participants connected the dots on the postcard it read, “I can’t wait to eat Gouda cheese at #SXSWisconsin.”

The kits also contained a branded pint glass, a candle with the aroma of freshly cut grass, two signs reading “THIS” and “THAT” to aid participation and encourage people to keep their cameras on, a cheat sheet for alcohol pairings, and a kazoo. Following the survey, attendees received a link to a video on how to play the “Cheesin’ Around” song, which attendees could play with a two-piece band as a welcome to Nick Offerman. 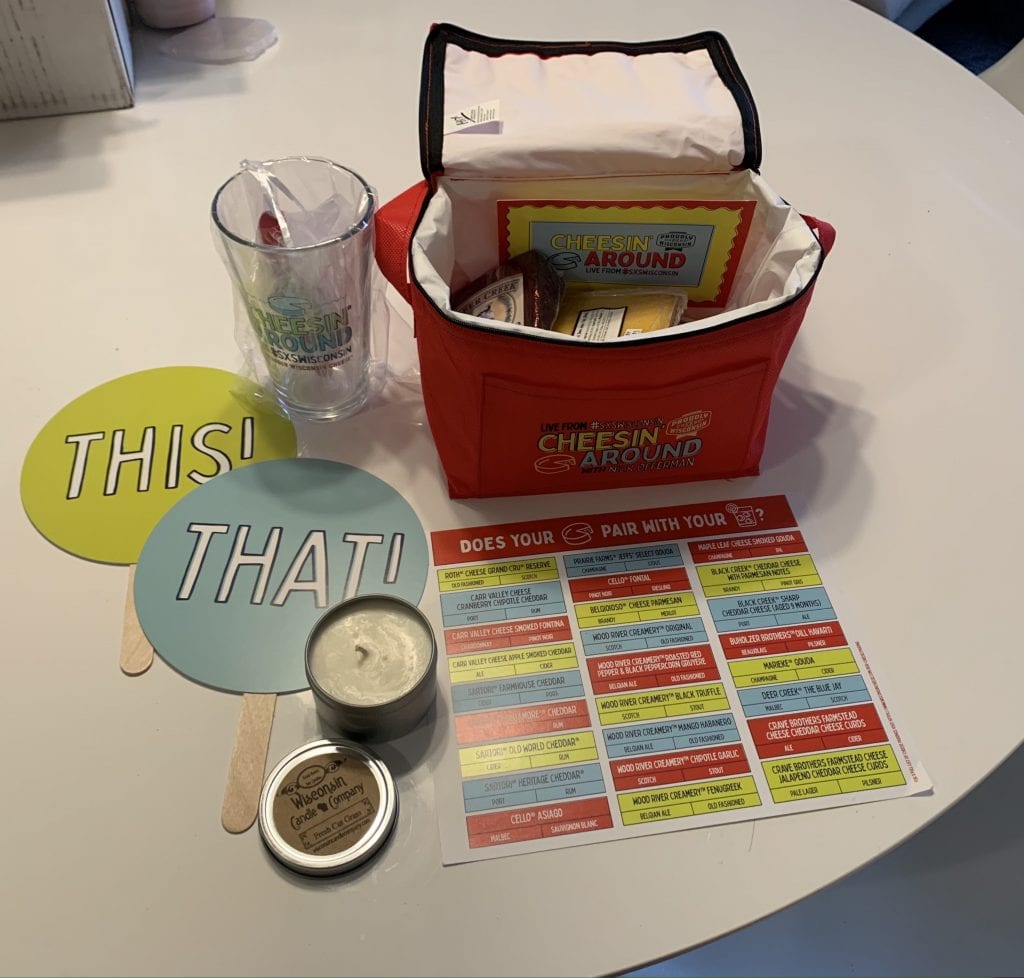 Kits filled with event props and cheese were personalized and mailed to attendees’ homes.

Several pre-recorded cameos from celebrities, chosen by the team to match the most popular survey responses, drove participation. For instance, since most of the group liked the show “The Office,” attendees watched a video of Kate Flannery, the actress who played Meredith Palmer, and then guessed which alcoholic beverage she prefers to drink when eating cheese. Viewers entered their picks in the Zoom chat and then winners were randomly chosen from those that answered correctly. Prizes included free cheese, commemorative cheese boards and, for one lucky fan, free Wisconsin Cheese for a year.

“The idea was to build the program around the preferences of the audience so it wasn’t us just blurting out the messages about our brand. It was about understanding them and giving them what we knew would make it a really great time,” Fanning says.

Other celebrities, including Sean Astin from the film “The Goonies,” Dos Equis’ brand ambassador Jonathan Goldsmith, a.k.a. “The Most Interesting Man in the World,” and NSYNC’s Joey Fatone, made appearances. At the event’s conclusion, attendees chose to be serenaded by either Kenny G, LeAnne Rimes or Mrs. Kasha Davis from “RuPaul’s Drag Race.” What’s more, for a few attendees whose interests aligned closely with the event’s touchpoints, the brand created personalized cameos. One example: A science fiction fan scored a cameo from “Wandavision” actress Danika McElroensen who addressed the attendee with a personalized message.

Will Livestream for Cheese

Though virtual events limit live experiences in very real ways, Wisconsin Cheese has embraced them to keep its cheese community engaged. There are a few advantages, too. For one, the Cheeselandia crew is able to meet more cheesemakers during virtual events than they could in person, since it’s difficult for cheesemakers to leave their production facilities.

“They’re small facilities, so they are dependent on those key cheesemakers. We usually can only get one. At these events, we’ve been able to have as many as five,” Fanning says.

And virtual events are not restricted by geography, so attendees from all over the country are able to connect. For Thanksgiving, for instance, the community held a virtual progressive dinner with each course taking place in a different state.

Looking ahead, the brand wants to grow its cheese community. It added more than 100 new ambassadors since March 1, and Fanning is hoping to add hundreds more after a post-event survey urges attendees to join.

“It’s a high-touch community; it’s not like a Facebook group. People are active, talking and cheering,” Fanning says. “We’re glad to welcome more people into our cheese community. And we’re glad they enjoy our events.” Agency: We Must Be Bold.