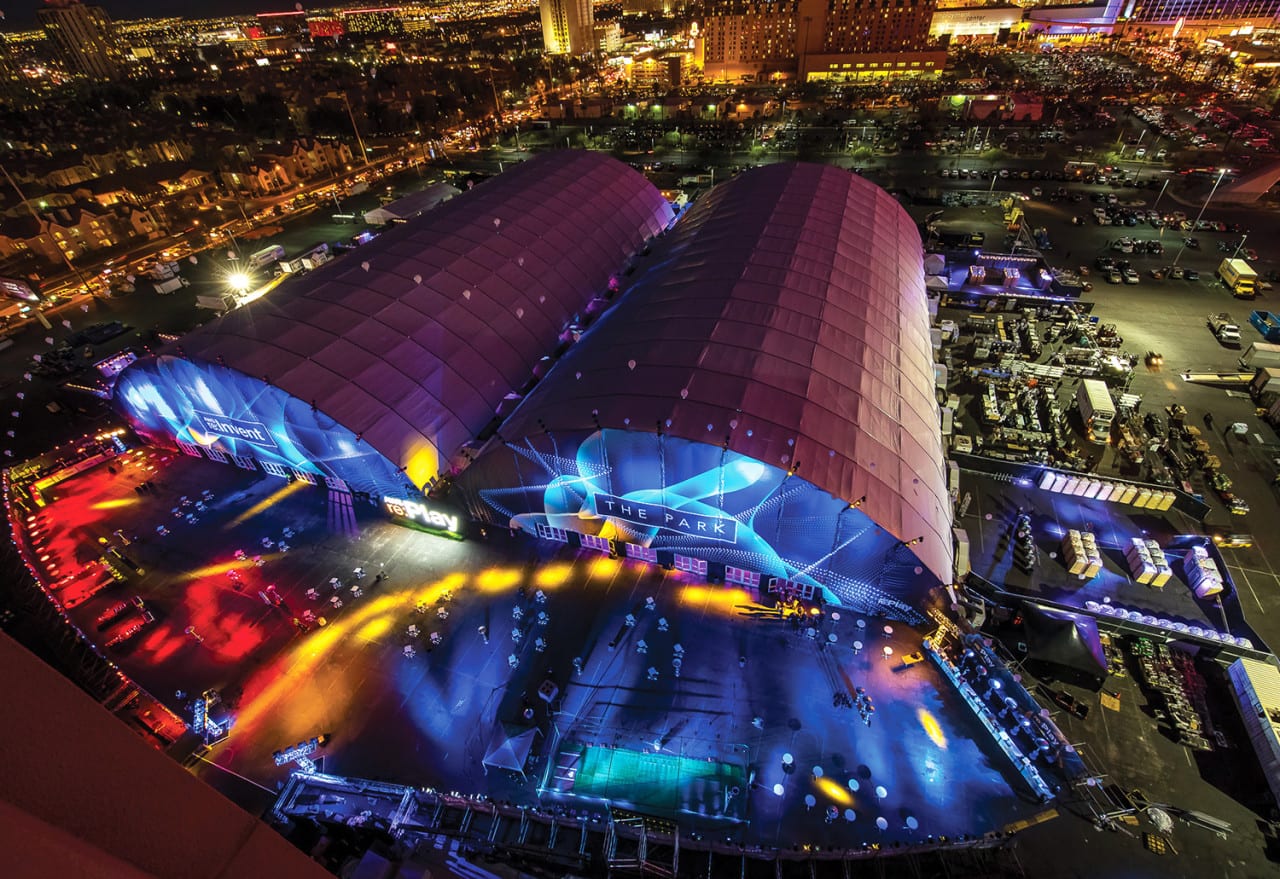 Behind the scenes at re:Invent—one of the world’s fastest-growing developer conferences 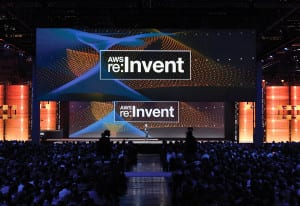 Amazon Web Services’ re:Invent conference positions itself as the event of the future—heavy on networking, tech and flexibility.

The word “reinvent” is commonly defined as “to make over or revive” and it couldn’t be a more fitting name for Amazon Web Services’ tech conference. The five-day event (held Nov. 28 to Dec. 2, 2016) boasts three keynotes, 14 boot camps, five certification workshops, 450 breakout sessions, four spotlight labs, hundreds of exhibitors—and one epic chicken wing-eating contest. And with 433 percent growth in just four years, it might be one of the fastest growing tech conferences in the industry.

It all started in 2006 when Amazon Web Services (AWS) established itself as a cloud computing startup under the Amazon umbrella. Its purpose was simple: build computer systems more quickly and more efficiently. By 2012, business was booming and the brand’s customers were eager to expand their knowledge of AWS’s services. And so, AWS re:Invent was born (Opus Agency handles).

“We started offering computing services to companies around the world, and what comes of that is a lot of change,” says Ariel Kelman, vp-worldwide marketing at AWS. “It’s a different way of doing things and that change touches every part of a technology organization. Because of that, there’s a tremendous hunger for educational content. [Users] want to learn a lot and that’s why events ended up being so strategic for us.”

Initially confined to one location in Las Vegas, re:Invent in 2016 expanded to include two additional resorts to accommodate its rapidly growing attendee base, which is comprised of about two-thirds AWS customers and one-third AWS partners. To keep the event flowing, the brand enables conference badges with a short-range RFID chip for quick scanning at key events, including boot camps and breakout sessions. Attendees can also reserve seats for their preferred sessions by using the Schedule Builder available on the event’s registration site.

The sessions themselves are geared towards educating attendees on the two things they’re most eager to learn about: best practices in cloud computing and updates on the functionality of the 90-plus services offered by AWS. How attendees absorb the content, however, is a personal decision. The brand offers a variety of session formats (including late night labs) to accommodate different learning styles—a move the industry is likely to see replicated more and more as conference organizers make a bigger effort to personalize the attendee experience. 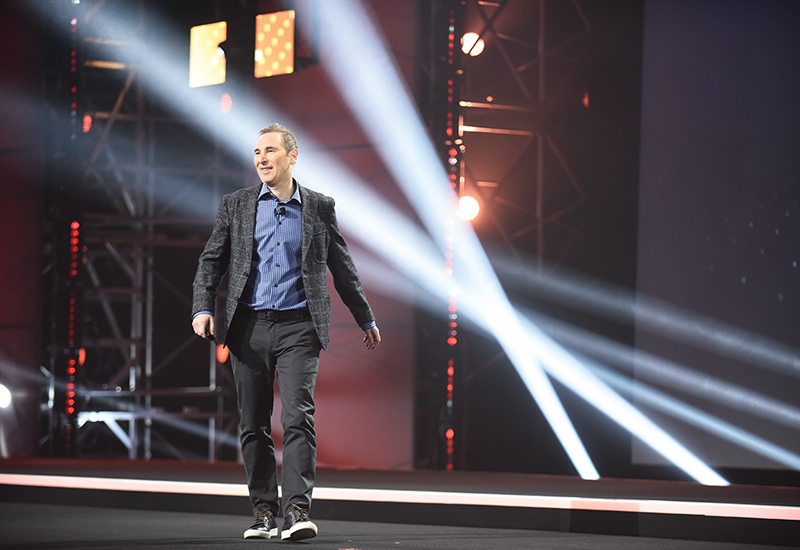 On top of executive insight, like that of AWS ceo Andy Jassy (pictured), re:Invent places an emphasis on peer-to-peer learning.

“People like to consume technical education in different ways,” says Kelman. “So we have everything from sessions where you can sit, listen and watch someone else do the hands-on technology, to drop-in, hands-on labs where you can do something for an hour and leave to do something else, to eight-hour boot camps where it’s pretty intensive training, to hackathons, which are similarly intense but a little bit less structured.”

Despite the mountains of technical content the sessions provide, AWS places just as much importance on the organic peer-to-peer education that takes place throughout re:Invent. According to Kelman, the majority of attendees want to hear honest assessments of AWS’s offerings and learn real-world best practices from their fellow IT professionals—an aspect of the conference that AWS has incorporated into its overall marketing philosophy.

“We believe that the best AWS sales pitch is one that is not delivered by an AWS employee, but one that comes from one of our customers,” says Kelman. “We love getting together prospects, customers of all different skill sets, and then also the media and analysts, because the best press interview is a customer talking about us.”

In a similar vein, networking is also an important piece of the re:Invent puzzle. A one-day Global Partner Summit held before the main conference starts provides an opportunity for partners to connect with fellow executives, while comfy lounge areas spread throughout the event offer informal meetings spaces for customers. AWS plans to continue making these opportunities for interaction an integral part of the re:Invent fabric, says Kelman. “I’ve had people tell me that the networking is more important than the content.”

When attendees aren’t busy networking or consuming content, you’ll likely find them enjoying one of the myriad extracurricular activities offered at re:Invent, which embraces the “work hard, play hard” mentality. Among them: a Pub Crawl, a Movie Night, the Tatonka chicken wing-eating challenge, a Harley-Davidson motorcycle ride and an outdoor party dubbed “re:Play.”

Attendees can also kick back in one of the event’s massive meeting spaces. The Park offers a place to watch keynotes, sip on brews from an on-site Beer Garden, listen to a dj spin tunes inside a customized Hummer or participate in a number of interactive activities like mechanical bull cat riding (yes, seriously) or dead computer junkyard mini golf. Meanwhile, AWS re:Invent Central features a Dev Lounge, Partner Theater, Connected Cafes, sponsored pavilions and a Charging Lounge where the brand live-streams two of its three keynotes. Extreme selfie stations and a virtual graffiti wall are also part of the mix.

“We’re trying to create a memorable experience and also to have an unpretentious, accessible attitude where people can feel like it’s casual and comfortable, but at the same time it’s serious on the technical side,” Kelman says. “To have that balance where you do fun, quirky activities, from a 5K run to a Harley ride, to a chicken wing-eating contest [is important]. It’s just like people in the world outside of events—they want to work hard during the day and they want to blow off steam and have fun at night.” 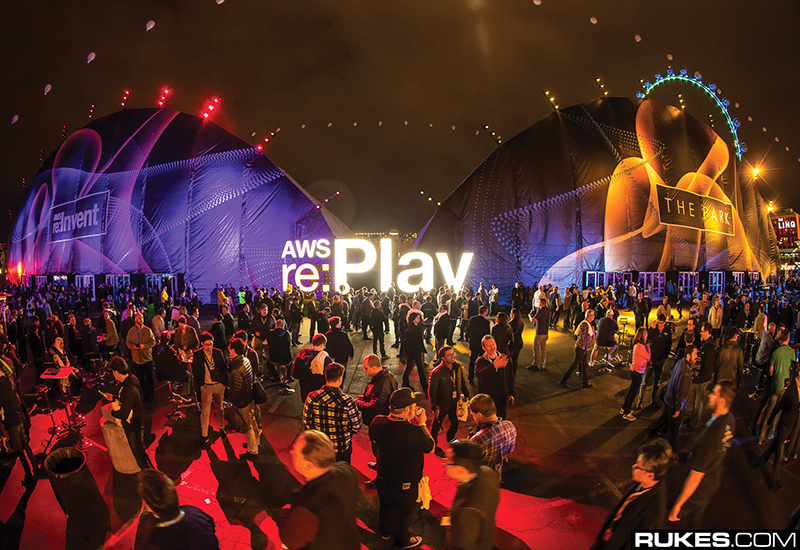 AWS also caters to a growing number of virtual re:Invent attendees, which in 2016 totaled about 50,000. The brand live-streams its keynotes and most popular sessions, in addition to making all conference content available on YouTube within a week of the show.

“We think it’s important to relieve a little bit of the demand,” says Kelman. “So if some people don’t want to travel, they can get a good experience from getting the content without having to go [to the event].”

That demand has grown exponentially since the inaugural re:Invent. According to Kelman, AWS attributes the conference’s progress to both its growing customer base and word-of-mouth recommendations from past attendees. What began as a 6,000-person event in 2012, he says, evolved to attract nearly 32,000 attendees in 2016. And AWS predicts the event will only grow from there.

So, what’s next? As re:Invent continues to serve as a case study in growth, AWS says the evolution of the event won’t interfere with its original mission—education and community will remain a core part of re:Invent’s DNA.

“The best thing that we can do for our business in marketing is to do a good job educating customers on what our products do, what they can do with them and how they can be successful using them,” says Kelman. “If we do that, the business side takes care of itself. And while of course we value the leads we generate [at re:Invent], we have a much simpler philosophy of delighting our customers with the technical education they want. That’s the primary goal.”