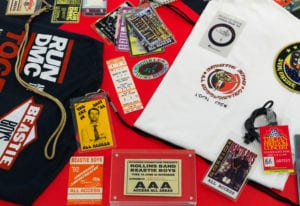 The Beastie Boys exhibit is brimming with band-related memorabilia.

When the Beyond the Streets graffiti exhibition (BTS) launched in the summer of 2018 in Los Angeles, show curator Roger Gastman worked closely with lead sponsor adidas to highlight the connection between street art and skateboarding, and to celebrate all things street culture. The three-month expo quickly caught fire, prompting Gastman and adidas to begin work on expanding the platform for 2019. Lessons were learned and strategies were tightened, and on June 21 of this year, Beyond the Streets descended on New York City, offering a 100,000-square-foot museum experience dedicated to telling the story of how music, art and skateboarding led to street culture’s modern place in the mainstream. Demand for the experience was so high that BTS was extended for an extra month, wrapping on Sept. 29.

adidas once again served as lead sponsor of Beyond the Streets, this year offering a comprehensive Beastie Boys fan exhibit, and a host of free live experiences tied to the platform to engage the 80,000-plus people in attendance. The Beastie Boys have a history in the graffiti and skateboarding scenes, making the band a perfect fit for the installation.

“We wanted to be as diverse as possible when we approached New York, so the big thing for us was, what does a branded exhibit look like?” says Cullen Poythress, senior communications manager at adidas Skateboarding. “We achieved that through our partnership with the Beastie Boys. We wanted to tell the story of the Beastie Boys’ place within this culture, so they were the perfect partner to bring to life within this larger graffiti/street art narrative. What we walked away with was a completely immersive exhibit within the bigger show—it was its own room—filled with all sorts of incredible Beastie Boys ephemera straight out of the storage lockers of [Beastie Boys members] Mike D and Ad-Rock.”

The exhibit featured a variety of memorabilia, vintage footwear displays, like the adidas x Def Jam Campus shoe popularized by the Beastie Boys, and images from renowned skateboarding and music photographer Glen Friedman, who showcased the band not only through the ages, but wearing adidas over the years. adidas also released 500 pairs of limited-edition sneakers (which sold out in minutes) designed in collaboration with the Beastie Boys. To celebrate the collab and exhibit, the brand held a launch event hosted by LL Cool J during which Mike D and Ad-Rock took a deep dive into the band’s album “Paul’s Boutique.”

In addition to the exhibit, adidas offered a number of free events, including a weekly endeavor called “Summer in the Street” featuring premium art and cultural experiences for all ages. Among them: a beatboxing class for kids designed to get the next generation excited about street culture, a hip-hop and breakdancing dance class for women, a workshop led by graffiti artist KEO who taught attendees how to draw a “b-boy” (breakdancing) character, film screenings, influencer appearances and a “private” graffiti show created with hardcore ’80s band Judge that was open to all.

adidas also worked with legendary skater and artist Mark Gonzales to help raise funds for the Harold Hunter Foundation, a non-profit organization that provides skate resources and programming to underprivileged youths. At a benefit event, private collectors, media and friends and family could purchase pieces from Gonzales’ private collection as well as 50 hand-painted basketballs, made specifically for the event.

By the end of the show, BTS had earned 954 million editorial impressions, 854 million of which were tied to adidas.

“The story of graffiti, hip-hop, skateboarding culture, street art and this entire package is a story that has been begging to be told for a long time,” says Poythress. “There’s enough of an anthology, enough of a history to this movement to where it’s an important part of American culture… Having adidas be a part of that story from the beginning, there’s a lot of equity there. There’s a sense of pride; it’s very cool that our brand has been a natural part of the evolution.” Agency: Pressure Point Creative.

Inside adidas’ Beyond the Streets Sponsorship: