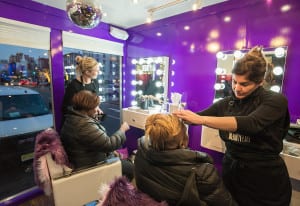 With its bumping music and bright purple branding, VH1’s Glam N Go Beauty Truck that hit the streets of New York City, Feb. 27-28, gave passersby a glimpse into the network’s newest reality series, “VH1 Beauty Bar.” To drive tune-in for the premiere on Feb. 28, the network parked the converted box truck in six high-traffic areas, including Chelsea Market, St. Marks Place, Union Square Plaza, Bryant Park, SoHo (at Lafayette and Spring streets) and 12th St. and Lenox A’e. The build featured windows all around and “beauty in the front, party in the back” messaging.

Inside, beauticians manned three salon-style stations and offered complimentary makeup and hair touchups and nail decals as clips of the series played on a flat-screen. As we observed on-site, design touches on the interior created an escape, like a disco ball, wood flooring, and faux fur throws and pillows on the white leather seats. It offered the kind of “high-drama” setting VH1 says viewers can expect to see in the series about the colorful employees of House of Dolls, a salon in the Inwood section of Manhattan.

Brand ambassadors outside the vehicle and at nearby street corners invited consumers to the experience by handing out branded mini manicure kits and makeup bags and bottle openers shaped like combs. Those who snapped photos and tagged them to social media with #VH1beautybar received a purple VH1 branded S’well bottle, too—a nice premium takeaway.

“In a digital world where everyone is behind their screens every day, it’s really nice to be able to get people excited about a new show through an experience and allow them to be part of what’s happening in the show,” says Kate Keough, svp-marketing at VH1, MTV and Logo at Viacom. Agency: The Michael Alan Group, New York City.