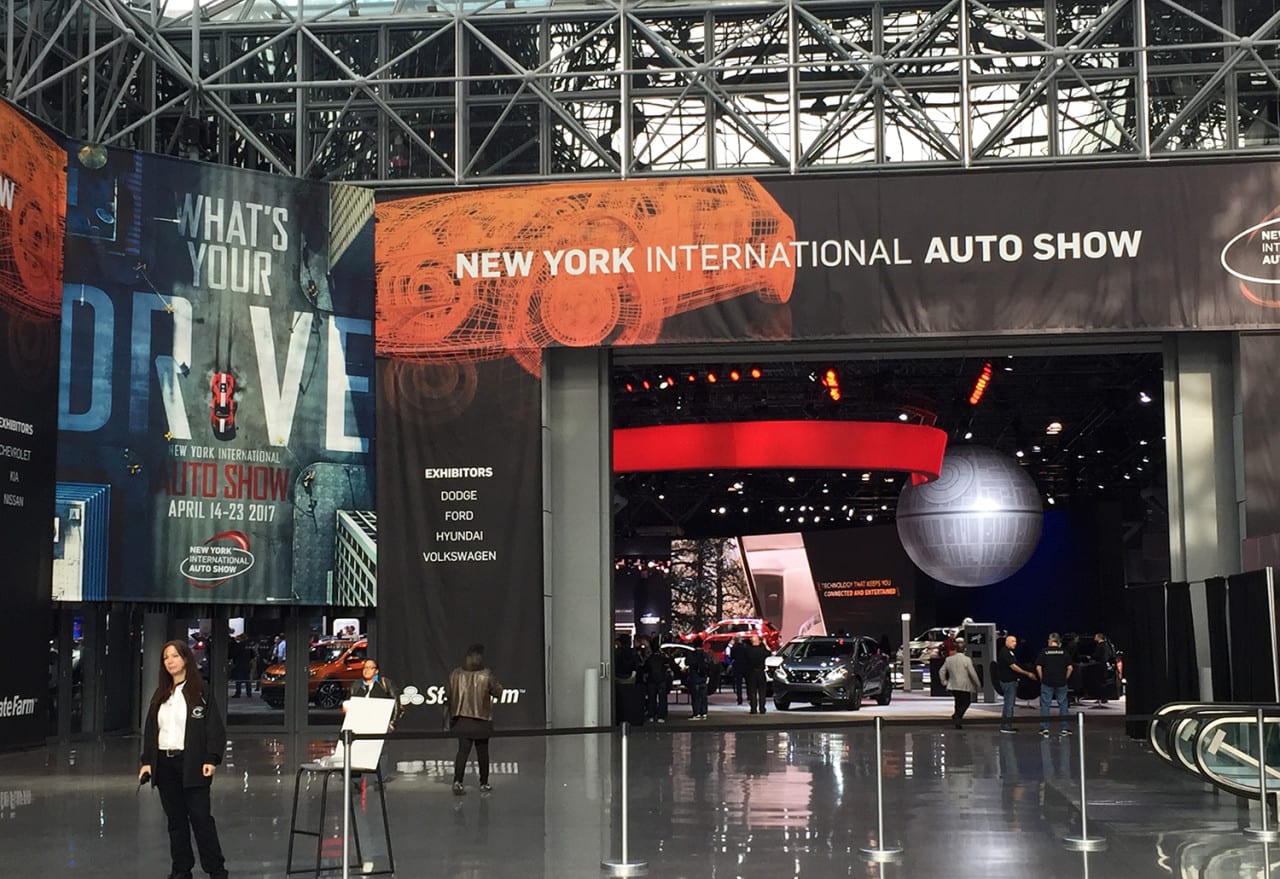 The 2017 New York International Auto Show, which took place over 10 days in April at the Jacob Javits Center in Manhattan, displayed the latest in roomy SUVs, crossovers and trucks, luxury sedans, souped-up muscle cars and all the glitz and glamour that two floors filled with shiny new cars can muster. But along with the eye candy, a smorgasbord of activations engaged attendees in activities, educated them on the technology under the hood and immersed them in brand stories via virtual reality, Instagram-able moments, touch screens, activation tables, dynamic graphic treatments, ride-alongs and more.

This is experiential marketing in high gear. Following are six lessons we picked up at the show, along with a desire, as Steppenwolf would put it, to “Head out on the highway, lookin’ for adventure….” in a brand-new set of wheels. 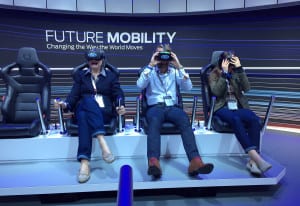 A key objective at Ford, in addition to showing off hot new vehicles like the 2018 Mustang, EcoSport, F-150, the Ford GT supercar and all-new Expedition, is to offer up engagements that encourage attendees to come, stay and play a while in its booth. Before they know it, attendees have devoted 45 minutes of their day at the show going through various activities designed to capture their attention. In New York, that meant going through a VR experience on the “future of mobility,” a big initiative at the company that includes innovations such as the Ford Pass app, a Ford bike, self-driving vehicles and enhanced park assist, which were also on display, along with the company’s electrified products and a pursuit-rated hybrid police car.

Besides VR, a Fantastic Face video selfie experience simulated Ford’s eco boost technology in a fun way by blowing air all over your face. Attendees received a souvenir card, scanned a barcode, looked at a screen, listened to a countdown and boom, their hair was standing on end. Then there was a video game-like activation in which players stood on a pad and, as they leaned right, left, backwards or forwards, traveled down a highway collecting points for time, energy, money and health. Just the thing to occupy the kids while mom and dad consider the cars. Agency: Imagination, Detroit. 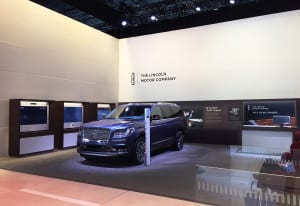 While Lincoln’s booth didn’t have the games, it did offer interactive touch screens to engage and educate attendees on vehicles such as the upscale Black Label Continental and the inspiration behind its three interior design themes—Thoroughbred, Chalet and Rhapsody—along with the appropriate finishes, materials and the company’s Black Label service privileges. Attendees picked images on a screen that most appealed to them to guide them to the model best suited to their taste and lifestyle. In an activation for the MKZ Navigator, which launched at the show in a Yacht Club design theme that featured a blue interior, attendees could change the wheels, add a moon roof, switch out the interior, then spin it around to see the final product onscreen and schedule a test drive. Agency: Imagination, Detroit. 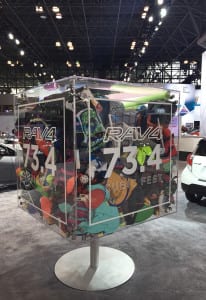 Sometimes there’s just nothing quite like a little low-tech to illustrate a concept, like how much stuff a car like the Toyota RAV 4 can hold, which is 73.4 cubic feet, by the way. Toyota made that point clear with a see-through plastic cube filled to the brim with everything necessary for a road trip. Another example: a large ruler depicted the adjustable height of its rear lift gate, which is good to know if your garage is a little low. But the brand got high-tech with a social wall that displayed tweets and photos from consumers and the brand’s social team curated in real time. Attendees also could upload photos of themselves or a vehicle tagged #toyota and the name of the show to receive a prize from a social vending machine.  Agency: George P. Johnson.

Honda deployed a 3D interactive table to demonstrate the different Honda technologies that go into its new Clarity series of fuel cell, plug-in hybrid and electric vehicles. The overall mission of the company is to get to zero emissions. The interactive table’s mission: to educate consumers in simple terms in a quick activation where they could spend four to seven minutes in an engagement and walk away with a couple of key ideas. Agency: George P. Johnson. 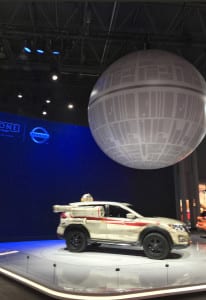 As part of its collaboration with Lucasfilm in support of “Rogue One: A Star Wars Story,” Nissan created an immersive consumer experience that spotlighted its Nissan Rogue: Rogue One Star Wars Limited Edition full-size production vehicle and two custom vehicles at the New York show. A massive, inflatable Death Star hovered over the booth, impossible to miss on the exhibit floor.

A VR experience placed attendees in the center of a simulated battlefield from the movie where they could experience Nissan technology in an immersive environment. And another fun interactive: a digital mirror experience where up to two show-goers at a time could stand in front of LED screens and be transformed into “Stormtroopers” or Nissan Rogue-inspired robots, then receive a photo to share. Agency: George P. Johnson. 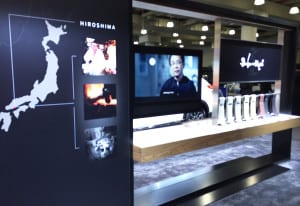 Mazda is headquartered in Hiroshima, an older factory town with a history of craftsmen, sculpture and art, a story that it brought to life at the auto show while keeping the spotlight on its vehicles. One engagement showcased the rosewood, aluminum and leather in the cars; another, the attention to detail that goes into the painting; and another, the tools used to create the clay models that are still used to develop the cars. It also presented a VR experience based on Jinba Ittai, a Japanese term that lies at the center of the company’s rich history and refers to the unity between a horse and its rider. In today’s world, that principle translates into the experience between the sporty Mazda Miata and its driver. Agency: George P. Johnson. 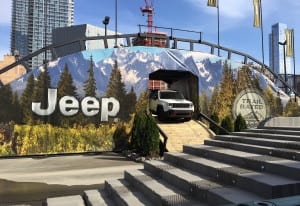 From its stand inside the Javits Center to its outdoor Camp Jeep, Jeep’s exhibit was all about the adventure of driving a Jeep—and the supercharged 2018 Jeep Grand Cherokee Trackhawk. Jeep stayed on brand with its depictions of the great outdoors as a backdrop to highlight the adventure of driving one of its vehicles, then offered attendees the chance to experience that firsthand in a ride-along course with a 35-degree angle hill, bumps and tracks that demonstrated the Grand Cherokee’s trail-rated capabilities such as its independent suspension system, maneuverability, low center of gravity, hill descent features and more—all without tipping over. Agency: George P. Johnson.

Lesson: Send in the Hounds 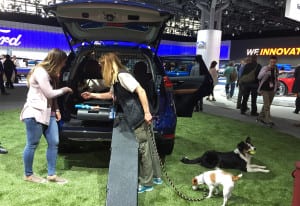 Who could resist this passel of puppies, which Nissan brought in as part of a special one-off creation, appropriately named the Rogue Dogue. Built by Dennis McCarthy, car coordinator for the “The Fast and the Furious” films, the Rogue Dogue offered special equipment such as built-in food and water dishes, harness clips, a “poop-bag” dispenser, even a 360-degree dog wash shower and integrated dog-drying system. Agency: George P. Johnson.