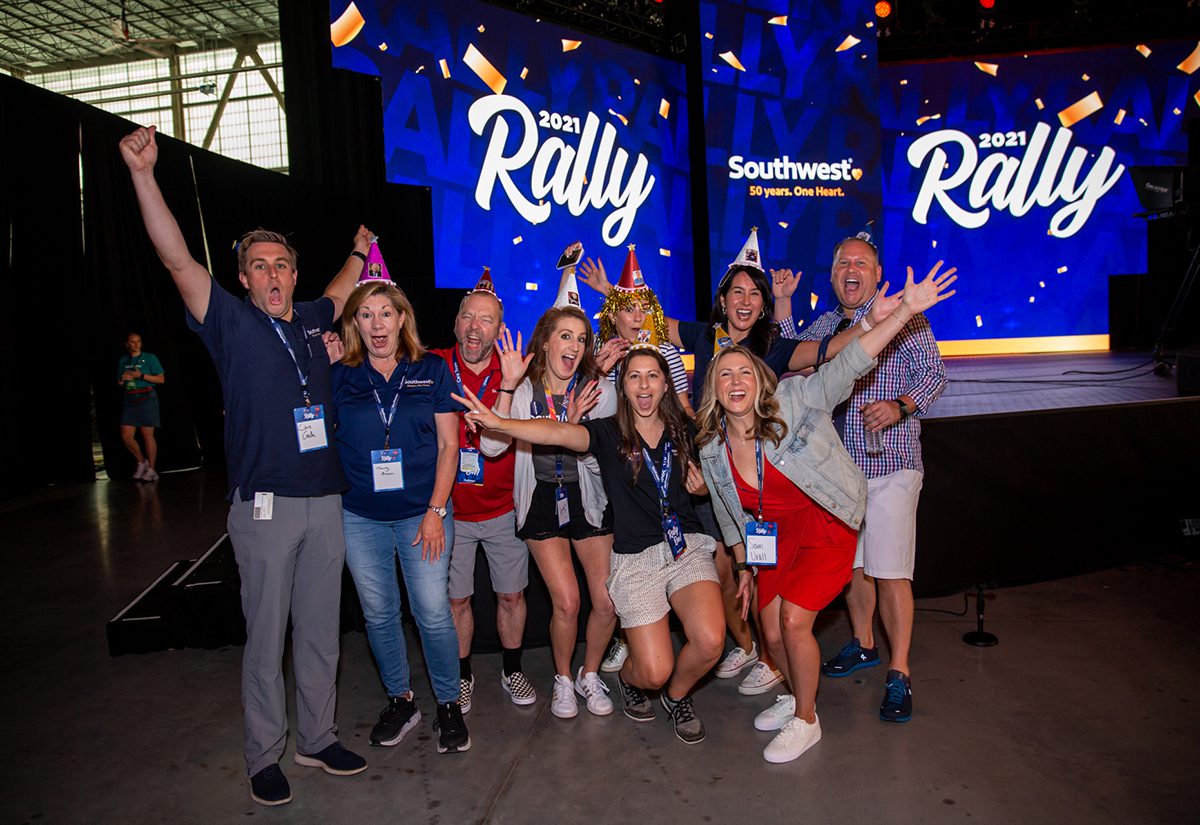 Southwest Airlines’ birthday week festivities are always a big to-do for employees, but as the brand approached the big 5-0 this year, grander celebrations were in order. Rising to the occasion, the airline hosted a hybrid 50th anniversary rally at a massive airplane hangar in Houston that included the reveal of its newest aircraft, Freedom One. The anniversary program also included an employee afterparty, a VIP charter flight on the Freedom One and consumer-facing airport activations. And if the attendee feedback is any indication, Southwest’s strategy made for a smooth landing.

Planning for the 50th anniversary campaign began pre-pandemic in 2018, meaning Southwest had to pare down its original strategy to comply with COVID regulations. Rather than producing multiple in-person customer events and hosting large employee celebrations in several locations, the brand focused its efforts on a single event featuring a 90-minute presentation that could be experienced by a select group of employees in person and thousands more online. 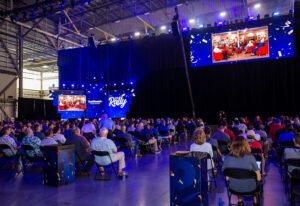 Available for viewing by virtual and in-person attendees, the rally centered on a 90-minute presentation that included a mix of live talks and pre-recorded content.

To attend the June 18 rally in person, employees entered into a lottery system that ultimately selected 650 people to join the Houston event. Fortunately, the event was recorded specifically for a virtual audience (think: camera angles, curated content), so those who didn’t make the cut could have an engaging digital experience. Employees on-site at airports could watch the event live from Southwest’s break rooms, while flight crews could catch it on demand after landing. Around 8,000 employees ended up engaging with the virtual platform at any given time, while 4,800 were actively commenting and sharing throughout the 90-minute presentation.

“We knew that we had to be limited in person, but we wanted more than ever, especially with it being our 50th anniversary, to be able to have employees see the action as it was happening live… and have the same access as those that would be in person,” says Whitney Eichinger, managing director-culture and engagement at Southwest Airlines. “It will probably be a practice we’ll look at moving forward because we have more than 100 locations coast to coast  and we have different groups that have a variety of different jobs.”

The presentation featured a mix of live talks and pre-recorded content that offered attendees a sense of where Southwest Airlines has been, where it is now and where it’s headed. Among those on stage were Southwest employees who have worked for the brand for all 50 years, brand agents who shared stories about everyday “wins” with customers, like returning lost items to them, and ceo Gary Kelly, who gave a state of the union address. Pre-recorded content included updates from the innovation team, thank-yous to key partners and a word from the first female airline president, among highlights. To close the event, Kelly delivered a kabuki drop-style reveal of the Freedom One, a 737-800 aircraft named in honor of the nearly 8,000 Southwest employees who serve or have served in the military. 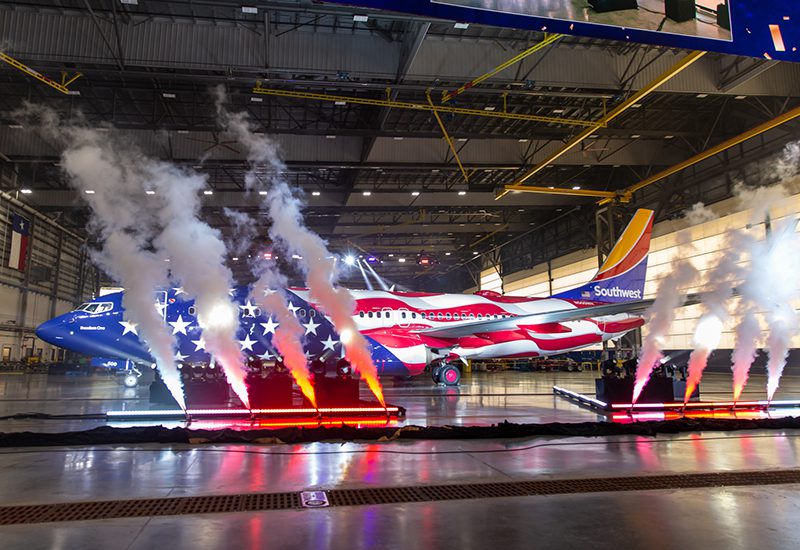 The rally included a kabuki drop-style reveal of the Freedom One, Southwest’s newest aircraft.

AFTER THE PARTY IT’S THE AFTERPARTY

Following the presentation, in-person attendees were invited to an afterparty held outside the hangar where they could socialize, watch a concert and enjoy fare from food trucks. The Herbert D. Kelleher commemorative plane, a Boeing 737-700 painted in Southwest’s original colors, served as the backdrop.

But the birthday festivities didn’t stop there. A select group of attendees were chosen to take a short charter flight on the new plane to Dallas Love Field Airport, where the aircraft went straight into commercial service. Dallas and Houston are among the first three cities Southwest added to its route map, giving the trip added meaning. Among those on board were Kelly, Southwest’s military council, brand officers and media, all of whom were regaled with employee stories and treated to an in-flight champagne toast. Upon landing, more celebrations ensued at the gate.

On the consumer side, Southwest adorned its various airport gates with festive décor, set up Instagram booths that gave travelers a chance to take photos with cutouts of different destinations and offered a Rapid Rewards contest that provided winners with travel points. There was also a surprise and delight moment for consumers at Dallas Love Field Airport. At baggage claim, the brand blocked off a belt and loaded it with wrapped presents for anyone passing by to take home and enjoy. The gift boxes contained everything from free vacation packages to beach towels and lunch boxes.

“We were all so exhausted from virtual environments, so it was nice to peek in on something that you 100 percent knew was live, and then also have that video content mixed in,” says Eichinger. “I think that gave it a different feel. It became an interactive experience. You’re not only dialing in or only being in-person. The flexibility that we had built up for the company over the pandemic really came into play for this. And I think it made us have a better event.” Agency: CPG Agency, St. Louis, MO. 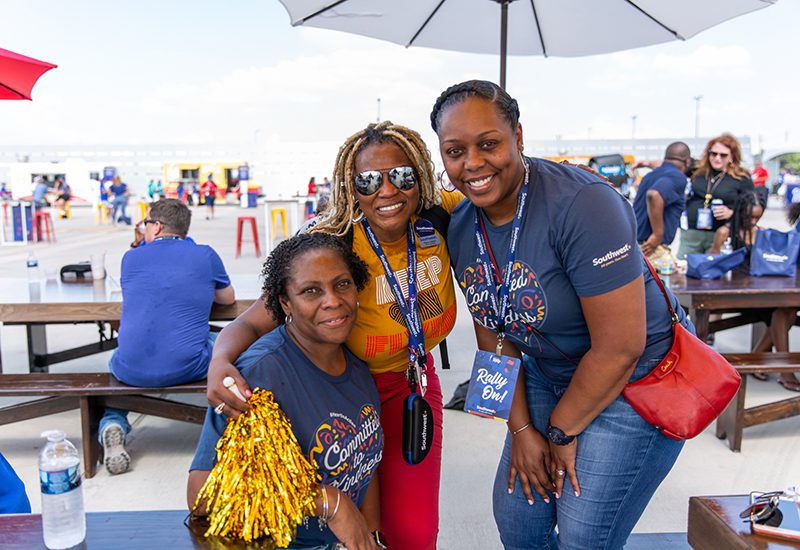 The rally wrapped with an outdoor afterparty where employees could eat, socialize and catch a concert.