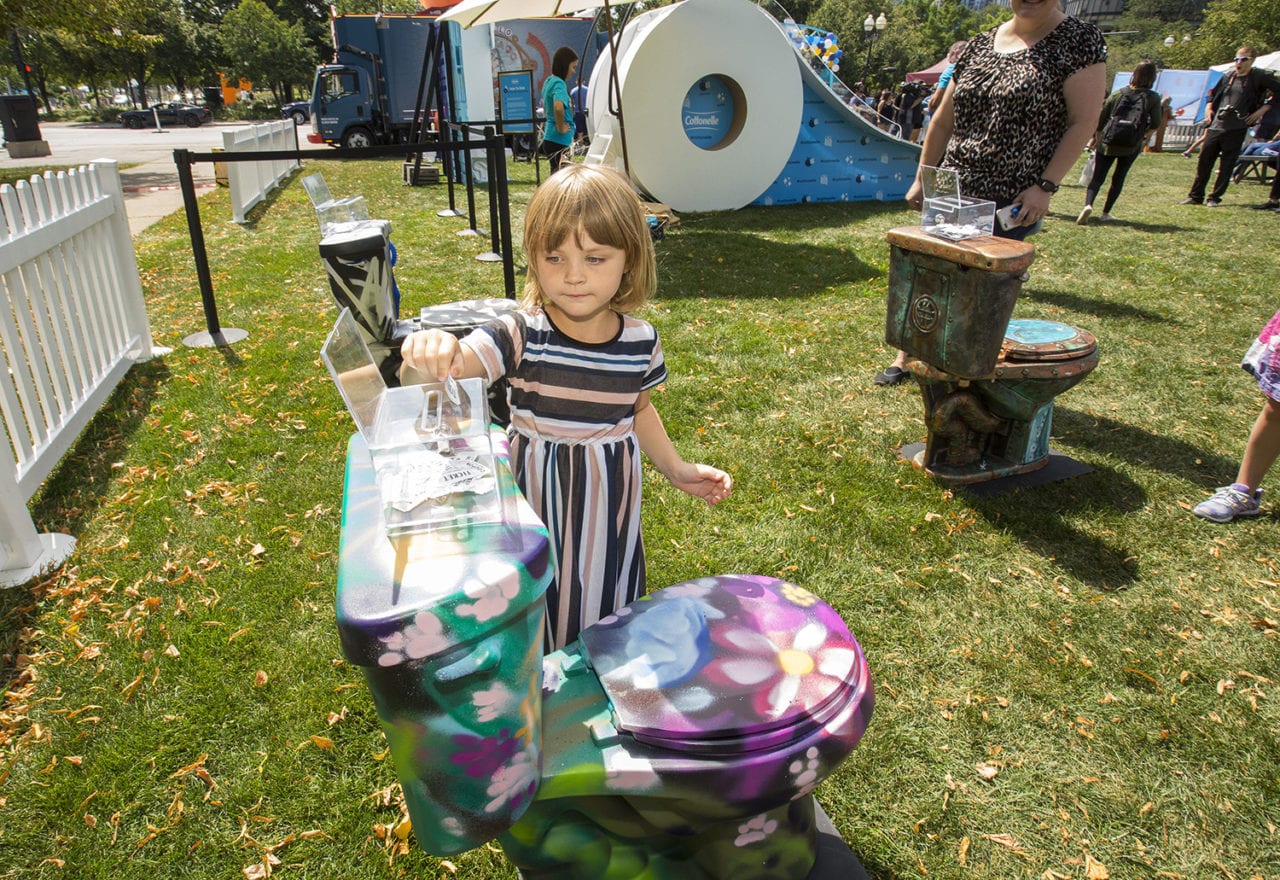 Advertising campaigns for personal care brands, especially the ones consumers use behind closed doors, often focus on helping consumers hide an issue rather than confront it. But a collection of brands this year capitalized on relatability—and an event program—to create irreverent, funny and honest campaigns that confidently told consumers in person: We get you, and others get you, too. In fact, what these next three brands demonstrate through stunts, platforms and sampling strategies, is that your brand can form a community for your users, no matter the category. 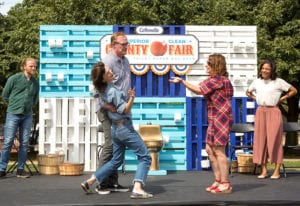 As part of an Amazon Treasure Truck partnership, (Treasure Truck is the e-commerce giant’s daily deals program), Cottonelle on National Toilet Paper Day threw a toilet paper carnival. Held at Navy Pier in Chicago, the event played up Cottonelle’s branding icon (it’s a peach—use your imagination), and promoted its flushable wipes—all the while, celebrating the fact that it’s no secret what happens in the bathroom. Among activities for families: a slide fabricated to look like a giant roll of toilet paper for folks to ride down on; an “Over or Under” game; peach-tossing into basketball hoops fashioned from toilets, and a craft area where kids could finger paint on peach installations. Throughout the event, an emcee announced fun facts about the history of toilet paper. Anchoring the footprint was the Amazon Treasure Truck with a giant inflatable peach fashioned on top, as well as a performance area where comedian and Chicago native Rachel Dratch joined members from the comedy troupe The Second City for live improvs about toilet paper—think “dirty” jokes and “clean” sets (Allied Global Marketing handled). —R.B. 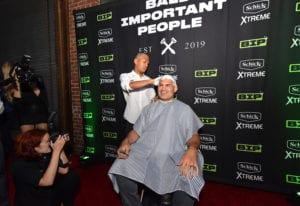 Schick created a community for top customers with the “Bald Important People” platform.

Facial hair trends are changing, and guys more and more are opting to keep their stubble or grow out their beards. So for its latest campaign, Schick Xtreme, with its blades that respond to and adapt to contours around the face and head, decided to modernize its messaging and form a community for its “superfans”—consumers with bald heads. The result: Bald Important People, a campaign launched during New York Fashion Week in September with an exclusive event for the brand’s “BIPs.”

To develop the program, Schick tapped into online communities, including a Reddit thread, where men (and a few women) who want to take the plunge and shave their heads seek advice from others with experience.

“It’s a new approach for us, and a different approach from the way razor brands have traditionally communicated with men. This is really about building a community,” says Nicole Cizynski, senior brand manager at Edgewell Personal Care. “You’ve got a lot of CPG companies out there who are pushing consumers to spark hair regrowth and urging them to try to maintain certain hair styles and we’re saying, ‘Hey, why don’t you try taking it all off?’ Bald is beautiful and bald is badass.”

For the campaign, Schick created the baldimportantpeople.com microsite, which features a gate that requires access to your device’s video monitor to have your image scanned with “Bald Recognition Technology.” If the scan detects hair, the user enters the “BIP Club.” (Everyone gets a coupon code for trying, hair or not.) The people that pass the test become part of an online community with access to products like the Xtreme3 Sensitive Disposable Razor and the Xtreme3 Pivot Ball Disposable Razor, designed for bald heads. 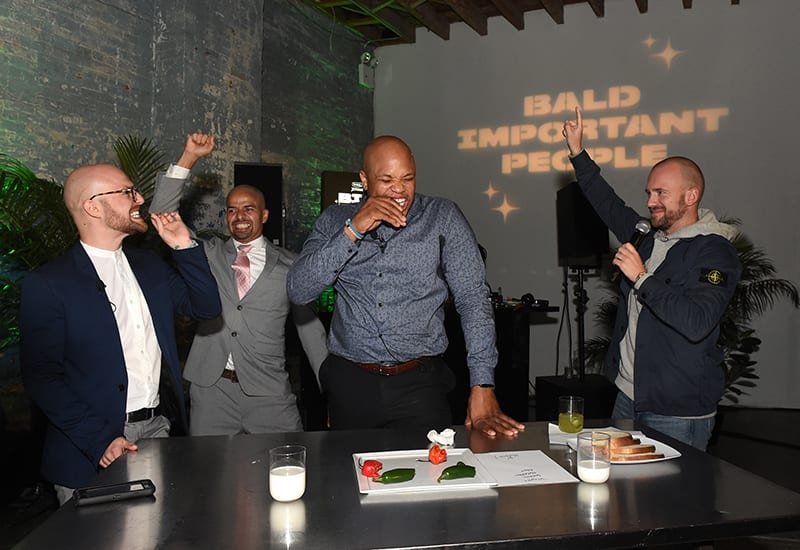 A a hot pepper-eating challenge was featured at Schick’s ‘B.I.P.’ event.

Select BIP members ultimately won an all-expenses-paid trip to The Baldest Party Ever during New York Fashion Week. The event (where a bald head was your ticket to get in) offered head-shaving stations for spontaneous moments, food and beverage, and bald influencer appearances by Netflix series “Styling Hollywood” stars Adair Curtis and Jason Bolden, as well as American professional mixed martial artist and professional wrestler Cain Velasquez.

“What we’re also seeing is when guys do take that plunge and go bald, it actually sparks this self-improvement journey. Through a lot of social listening and talking with these consumers and some of our influencers, we recognized that this is a pivotal point in his life when he is seeing himself for the first time without a head of hair,” Cizynski says. “He’s then more interested in exploring, whether it be new style ideas or getting into better shape or becoming more open to new experiences. And that’s all really at the core of what the Schick Xtreme brand is about, and the benefit that we want to give them” (Agency: Edelman, New York City).
—R.B. 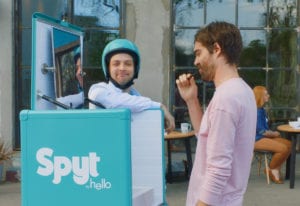 Consumers didn’t shy away from the chance to freshen up their teeth with Spyt on the street.

Oral-care brand Hello Products debuted its on-demand mobile teeth-brushing station called Spyt, which travels on the back of a Vespa and gives anybody off the street the opportunity to brush their teeth right there on the spot. The brand launched the product based on an insight that 30 percent of millennials say they only brush their teeth once a day. (Right?!)

The program took place in New York City over the summer and featured a scooter with a fully functional, tile-lined sink—complete with a toothbrush, several flavors of toothpaste, mouthwash and floss—mounted on the back of each bike. To keep the process fresh and clean, drivers sanitize the sink after each session and serve as brand ambassadors urging consumers to give it a whirl.

“I can pass out samples of toothpaste easily, but people are going to have to take that home, and maybe throw it in their bag and it gets lost,” says Amy Calhoun Robb, vp-marketing at Hello. “But this is a way where people have the opportunity to experience the product right then and right there, with all the tools they need.”

During the program, Spyt traveled to where people might congregate in large groups, such as coffee shops, and restaurant and bars, with plans to appear in the festival space in the future. In the meantime, interested consumers can sign up on the website’s “Spyt List” to be notified when the service comes to new markets (Agencies: Humanaut, Chattanooga, TN, production; Fancy Rhino, Chattanooga, TN, post-production; Junction 37, media, New York City). —K.H.

Skintimate’s Shave Bar where women could stop to get their legs shaved and enjoy a cocktail (inspired by one of the shave gel scents). The insight behind the program—that men will head to the barber shop for a fresh shave before a special event, but what’s the social equivalent for a woman? U by Kotex created a period pop-up shop that offered women a lively and hip shopping experience surrounding the typically unpleasant experience of the monthly cycle. And bidet brand Tushy created a convention for “like-behinded” folks and those in the bathroom industry.