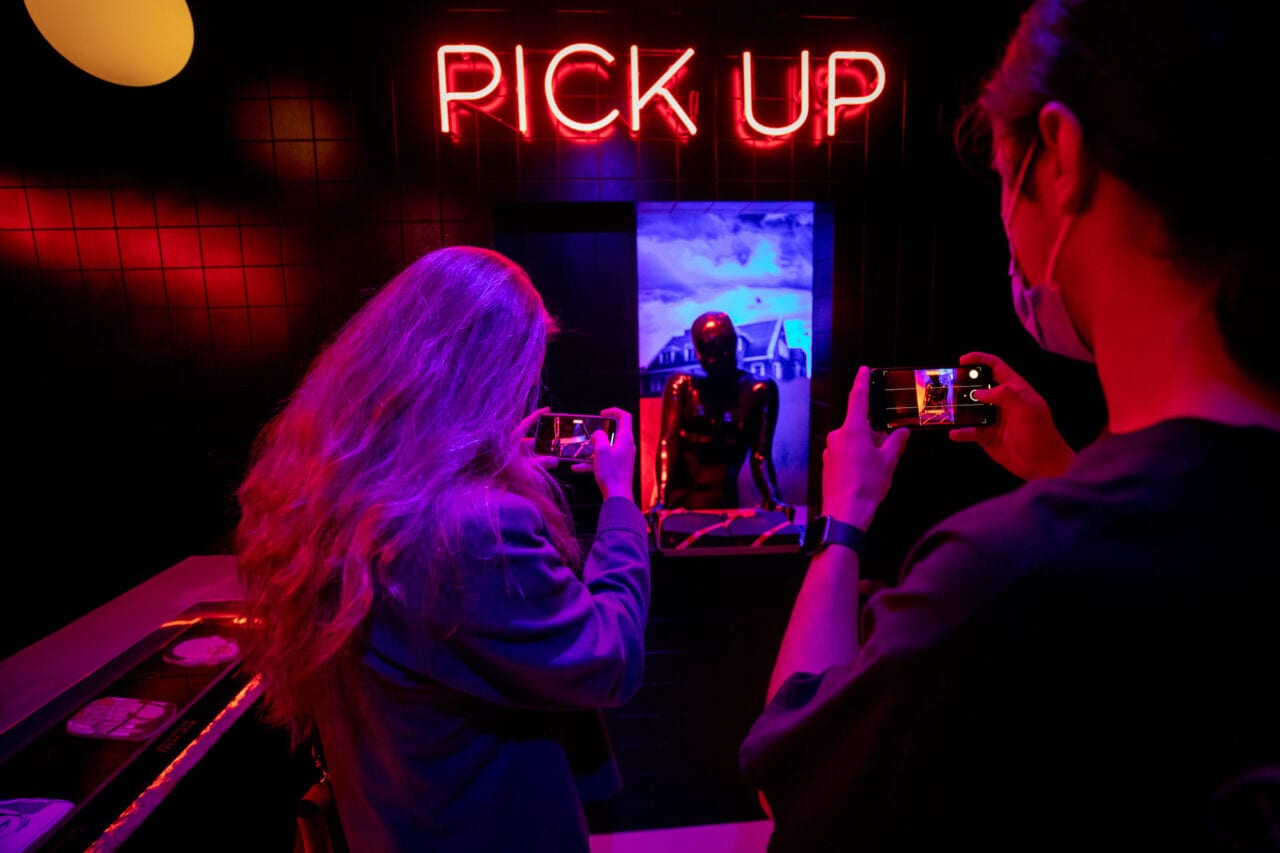 Walking up to the storefront in New York City’s meatpacking district, there were a few indications this wasn’t a typical bakery. An ominous black door and red neon lighting announcing the “Night Bites Bakery” greeted passers-by. Then there were the hours—opening nightly at 7 p.m. 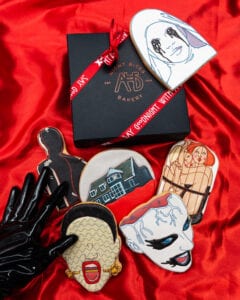 The sinister-meets-sweet pop-up bakery, which debuted July 14, was born out of the network’s knowledge of its loyal fan base and a desire to feed that fan culture.“’Horror Story’ fans are the most rabid, so any way they can touch, feel, taste, smell, be a part of what the show is, is a win for us,” says Sara Mald, vp-integrated promotions at FX.

The experience is part of a larger campaign dubbed American Horror Summer playing out across the show’s social channels. New for 2021, it combines promotions for the two series and leverages the seasonal timing.

The Night Bites Bakery buildout was rich with atmospheric details. The long, narrow space had a museum-like quality and featured sugar cookies decorated like works of art. There were six designs, all inspired by the franchise’s iconic characters and locations. They were displayed underneath bell jars on black pedestals, each held aloft by a disembodied head.

Consumers could order at a creepy counter at the back of the shop, where a bakery worker announced their selection into a retro-style microphone. They collected their treat at a pick-up window that opened to reveal Rubber Woman, a black-latex-clad figure instantly recognizable to fans of the franchise.

Other design details included custom-fabricated neon signs that spelled out “Say Goodnight with a Bite” as well as signs that indicated the order counter and pick-up window. Event staff wore stripped aprons customized with AHS iron-on patches and paper hats.

Following its two-week run in New York, the pop-up will head to Los Angeles as well as a location that the network is keeping a secret for now. Mald wouldn’t even say when FX would reveal the third site. Each location will offer some designs that are exclusive to that city.

“This franchise is always veiled in a little bit of secrecy,” she says. “It’s fun for us and for fans. They’ve come to expect that from the marketing.” 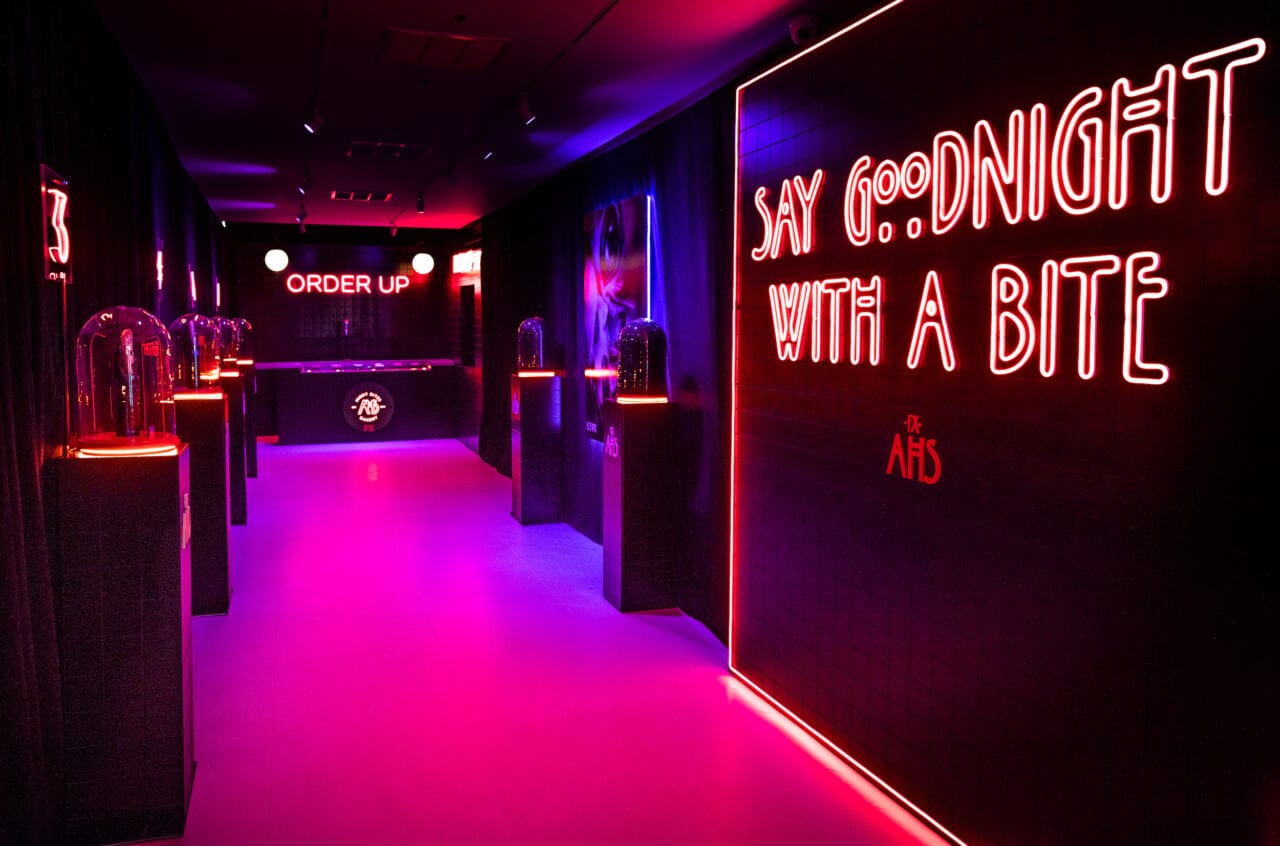 The bakery buildout had a museum-like quality, with cookies displayed under bell jars.

Brooklyn-based Funny Face Bakery created a total of 29 cookie designs for the pop-up. The most popular on opening night was a nun who was crying black tears from “American Horror Story: Asylum.” “They were a good fit for what we were trying to achieve with this show since the visuals are incredibly unique to the brand and something that our fans will love,” says Mald of Funny Face.

FX used Eventbrite to offer free, timed tickets to the public and control the flow and capacity. Fans claimed tickets for the New York run in just three hours. Five people were allowed inside at once—a total of 30 people every half hour—giving them ample time to take photos and video and engage with event staff while maintaining social distancing. 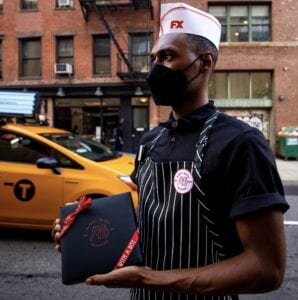 Unlike a lot of pop-ups that feel large and commercial, the bakery took over a space in NYC’s less conspicuous meatpacking district.

“We are very excited to have the opportunity to be back in the place where we could have a public event, but we still need to be mindful in where we are at currently in the world,” Mald says. “We want to make sure this is a fun and exciting experience, but also a safe one.”

An online component of the campaign will go live in early August with a microsite that will offer surprise cookie “drops” and invite consumers unable to attend the pop-up to enter to win cookies.

The pop-up is FX’s first full premiere experience since a February 2020 event in Los Angeles for the debut of “Breeders.” (The network hosted a drive-thru car wash for “Snowfall” in February.)

“I hope this is just the beginning,” Mald says. “Our favorite thing that we’ve missed most is getting to see fans be engaged, how excited and happy they are and how much they get into it.” Agency: NVE, Los Angeles.