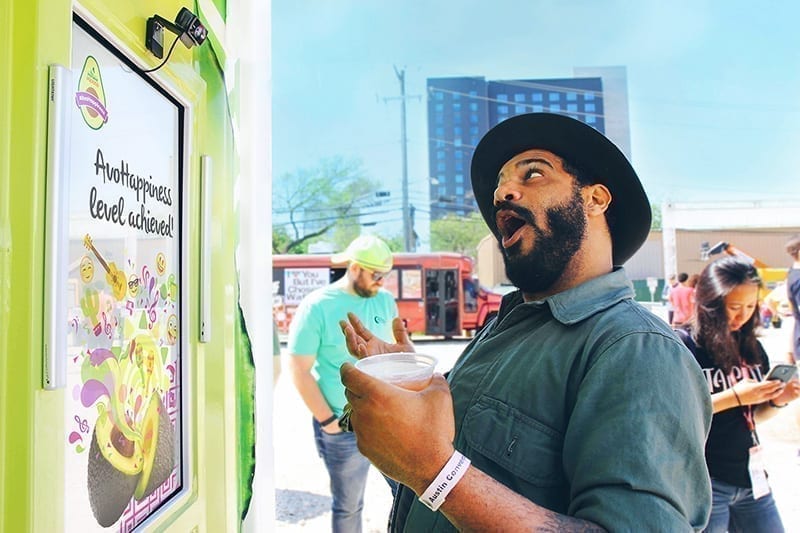 10 ways to connect with customization-obsessed consumers

The first wave of young Gen Z adults graduate college this year and will start entering the work force. And pretty soon, they’ll be registering for your events. Gen Z, an entrepreneurial-minded, customization-obsessed demo, is expected to influence a powerful shift toward what some marketers are referring to as extreme personalization. Described as “engagement at the right time, on the right device, with the right message” by one Forbes contributor, this cross-channel demand will, naturally, cross over into events as the extreme personalization of the attendee journey. To help point your teams in the right direction this year, we surveyed the event landscape for tech tools and tactics. 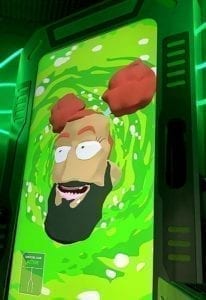 Adult Swim for its “Rick and Morty” activation at San Diego Comic-Con reignited fans’ interest in the series with the hyper-personalized Rickflector. Here’s how it worked: Consumers entered the game pods (Rickflectors) where they could play one of five “Rick and Morty”-inspired games. While in line, attendees created their own custom, show-inspired avatar from more than one million combinations. Once inside the pods, face and body trackers mirrored the users’ expressions and movements in the game. The games were based off of fan-favorite characters from the show and the entire experience was voiced by Justin Roiland, the show’s creator (Agency: Deeplocal).

There’s nothing more personal than creating your very own avatar, and the XR Avatar Station takes it to the next level capturing photographic quality CGI duplications of participants. It all goes down in a 10-foot by 10-foot scanner which takes multiple pictures of an attendee’s body using more than 90 cameras. The system stitches those images together to create a 3D model attendees can share via email or text. FX Networks used the system to create custom avatars at last year’s San Diego Comic-Con. Fans created custom GIFs and films by integrating their scan into a personalized scene from FX televisions series like “American Horror Story” and “It’s Always Sunny in Philadelphia” (Agency: Groove Jones). 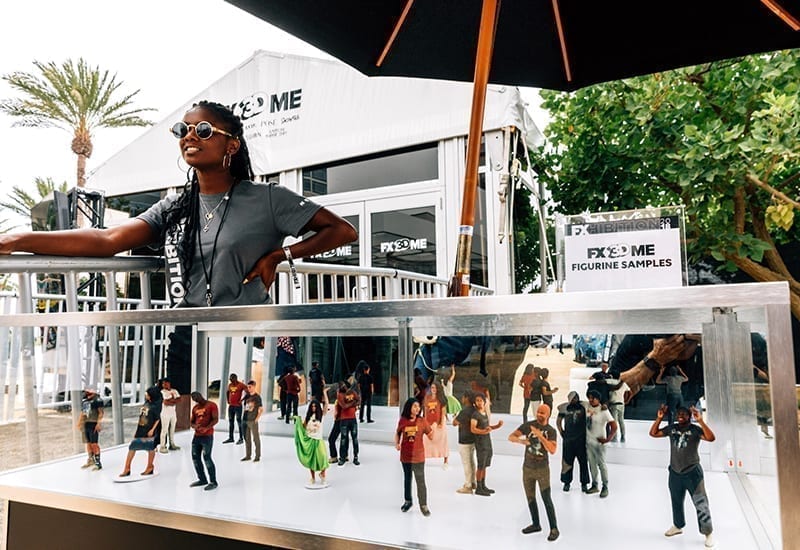 Pandora for its “Sounds Like You” concert activated a customizable photo concert activation where a series of questions algorithmically formed an individualized projection-mapped backdrop that featured fans’ names and favorite artist from the evening’s line-up. Questions included fans’ excitement levels and favorite parts of Pandora services. Pandora reported 1,200 fans queued up for the personalized souvenir and content. Another example: A fan activation at a NASCAR event, where Mazda leveraged augmented reality cameras that placed attendees into a pit crew, and took a video of them in action to share with their friends. (Agency: Next/Now).

Nothing feels more “custom” than playing a character, so Netflix leaned on immersive theater at SXSW 2019 promoting the film “The Highwaymen” with a bar transformed into a 1934-era speakeasy for three nights. The event featured gambling, themed cocktails, a “wanted” poster photo op, musical acts and a search for film-related clues aided by actors in full garb. The catch: attendees were each asked to “join the hunt” for Bonnie and Clyde, assume new names bestowed upon them at registration, and become part of the story. Staffers also doled out RFID wristbands used to unlock activities throughout the experience (Agency: Collide).

Idea #5: Ordering food with a smile.

For Avocados from Mexico’s SXSW 2019 presence, the brand leveraged a facial tracking order-taking system that directed attendees to smile to process their orders. After formulating their own avocado-inspired recipes based on ingredients and their personal preferences from a touch-screen, attendees were prompted to smile as a dial measured the size of their smile and how long they held it, which then proceeded to a reward screen. At the peak of their smile, the system would subversively take a photo of them beaming and present them with a personalized photo along with their personalized recipe (Agency: Next/Now). 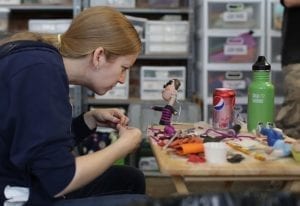 To help generate hands-on trials for its viewfinder feature, Lytro conducted a three-day campaign leveraging holiday nostalgia of stop-motion animation Christmas TV specials like Rankin-Bass’s “Rudolph the Rednose Reindeer” with the “The Lytro-izer.” For 72 hours straight, consumers submitted their funny, dramatic or just plain weird photos via Twitter for the chance to be Lytro-ized. The team at Screen Novelties Studios in L.A. reviewed each submission in real time and selected 12 photos per day to be transformed into a one-of-a-kind claymated scene that was then shot with the Lytro camera, tweeted back to the submitter and uploaded to a custom Tumblog at Lytro.me. Each Lytro-ized card was unique. In fact, the team performed on-the-spot research of each selected submission (where the person worked, their hobbies, etc.) and added in personalized props and details to surprise and delight (Agency: Manifold).

Facebook’s Creator Day brings together 120 of the top creators to build community, educate attendees on priority products and provide a platform for important announcements. One of the ways the brand put a personal stamp on the event: Creator Cakes, an experiential cake-decorating event that educated attendees on their Creator Studio levels through a color-coded baking activity. They were first presented with different color cakes that represented their personal creator level within the platform and then the creators collaborated in teams of four to decorate a cake, which was judged “Great British Bake Off”-style by representatives from Lark Bakery, in Los Angeles. At the end of the session, the winning team took home a coveted Creator Studio kit, filled with tips and tools for maximizing their Facebook Creator experience (Agency: Manifold). 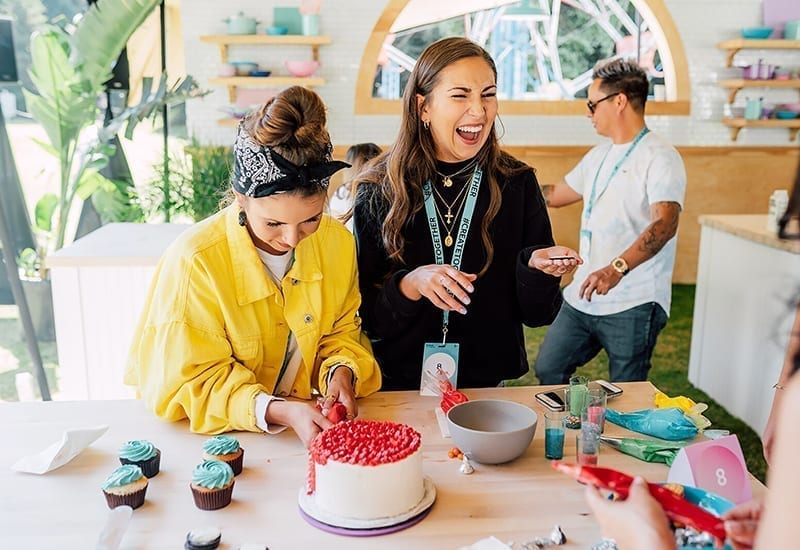 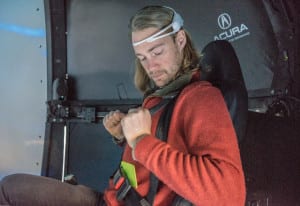 Acura’s famous Mood Roads 4D virtual driving experience treats attendees to customized visuals powered by their biometric responses. Attendees enter into a spherical motion simulator equipped with a performance driver’s seat and 30 biometric sensors that measures 24 integration points, such as brainwaves, heartbeat and facial expressions. Once buckled in, they experience a customized journey in real time as landscape, color, music and speed all change based on their mood as interpreted by the sensors. No two driving experiences are alike (Agencies: George P. Johnson, Spinifex Group).

It may feel gimmicky, but a personalized treat offers just enough whimsy to be effective—and activates personalization at scale. A number of companies specialize in this offering, including Selffee, which imprints selfie images on cookies, lattes, marshmallows, macarons, tortilla shells and other food items. Another player in the space, Ripples, specializes in putting patterns, logos and images on foam-based beverages. And then there’s MakrShakr, a robotic bar system that allows attendees to design their own drinks from 10,000 possible combinations.

Celebrities and global luminaries aren’t the only ones you should be rolling out the red carpet for. Personalized service can go a long way to impress attendees and superfans, alike. AMC for the season-eight premiere of “The Walking Dead” invited 3,000 superfans to a festival featuring a viewing as well as a live broadcast of “The Talking Dead” interview show. Each attendee was sent a detailed itinerary, had access to guest services, and received real-time communications, and travel management ahead of the event (Platform: Concierge.com).

And at SEMrush, organizers embraced the motto “Bring people for content, let them leave with emotions.” The SEMrush LIVE user conference featuring 130 digital marketers kicked off with a “be yourself” dress code, and continued with a “we got you covered” experience where attendees enjoyed complimentary transportation, 4G high-speed mobile hotspots (given to each attendee) and hand-written notes, among touchpoints.