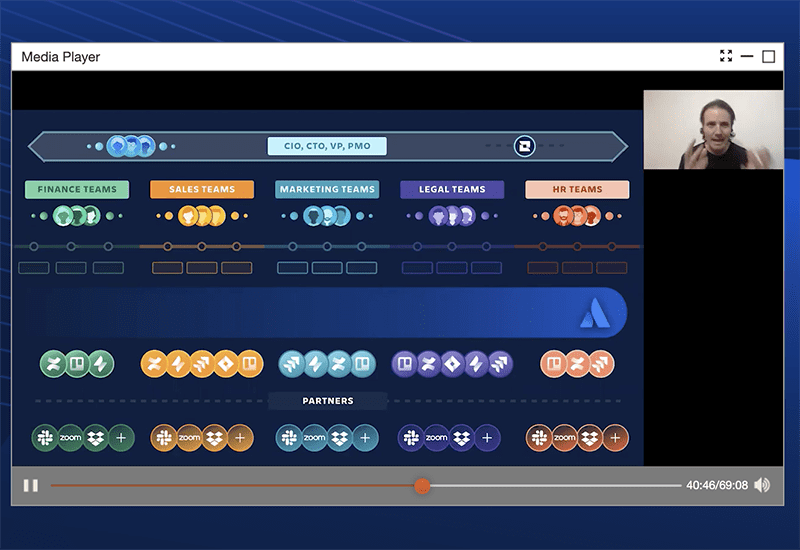 Roughly a month before the 2020 Atlassian Summit, organizers made the difficult choice to shut the in-person conference down. Shortly afterward, the brand decided to transition the event to digital, adjusting its goals along the way to cater to the current climate. The move was announced on March 4, and from April 1-2 (the event’s originally scheduled dates), Atlassian hosted a “Remote Summit” that drew 17,000 attendees—12,000 more than the physical event was slated to attract.

With just 28 business days to shift the in-person summit to virtual, all hands were on deck (Impact Point Marketing handles). The good news was that Atlassian already had a digital strategy in place to supplement its physical event, with plans to broadcast the event’s keynote and top-attended breakout sessions, and create a sponsored news desk that allowed viewers at home to get involved. It was this pre-pandemic digital plan that allowed for a pivot in less than a month’s time, according to the brand.

The Remote Summit had all the trappings of a typical conference, including keynotes, general sessions, breakouts and one-on-one product consultations. But it also had creative components, like a gamified experience in which attendees engaged in certain types of activities on the platform and earned points, resulting in gift certificates and free tickets to next year’s summit. There was also a sponsor zone where partners highlighted their products and solutions in a fully branded environment, answered questions and conducted chats. According to Atlassian, the setup allowed for even higher qualified lead generation for sponsors than the physical event would have offered.

The virtual conference, of course, did not come without its challenges. For one, Atlassian wasn’t able to create a live broadcast on the platform it was utilizing, which meant losing that sense of attendee excitement and urgency. It also required presenters to turn in their content a week early, causing a bit of initial chaos. And then there was the issue of mitigation plans around the system failing, and developing a communication plan for attendees tuning in from more than 100 countries. Perhaps the biggest challenge, however, was determining what kind of content attendees would find helpful in the midst of a pandemic, and adjusting goals accordingly.

“There’s this angst of, ‘All of this digital content is coming at me. What’s the most important content to look at now?’ So we were really struggling and trying to figure out what attendees care about most, and whether it was the same thing we had programmed and planned for a couple of months ago,” says Angie Smith, head of event and field marketing at Atlassian. “And it wasn’t. We had to pivot and bring new content and messaging forward to acknowledge that the world is in a different place now, and we hear you. We know you’re all struggling.”

Smith estimates the team curated only 30 percent of the experience online versus what would have been in person. “In talking to some of my industry peers, it was kind of a similar philosophy—not picking up the live event and trying to put it online, but curating the best parts of it that made the most sense,” she says.

Part of adjusting the brand’s conference goals included offering a variety of products for free to help those who were struggling, and reinforce the brand’s commitment to care. The difficult part was developing messaging around the free products in a limited amount of time and in a way that was sensitive, given the state of things.

The message resonated, according to the results. With 30,000 people registered and 17,000 ultimately in attendance, Atlassian scored a 56 percent conversion rate. For Smith, the numbers point to the power of digital events to broaden a brand’s audience and engage on a different level. And it’s an approach she thinks is here to stay.

“It’s time to reinvent ourselves. And if you weren’t leaning on digital in the first place, now it’s your only option for a period of time,” Smith says. “It creates this incredible opportunity for you to touch people and audiences that ordinarily aren’t able to be there in person. It’s certainly not a replacement—we all want to get the meetings industry back to business as quickly as possible—but I think realizing digital as a part of the equation as experiential marketers is important for us all to be thinking about.”