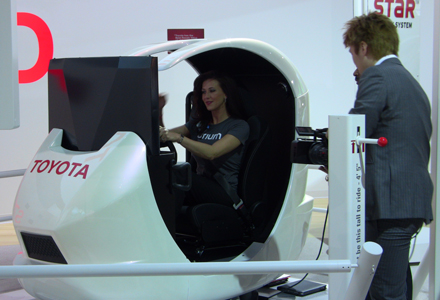 How Ford and Toyota Took Sims to the Next Level

There were two driving simulators at NAIAS—one from Ford and one from Toyota—and while they were very similar, one was better. Ford put up the Fiesta Rally car and Toyota went with an FJ Cruiser, but both had off-road courses, and both sat the driver in a rig that rolled on x, y and z axes depending on the driver’s steering, rolling and breaking. Both were a ton of fun but the winner was clearly the Toyota sim, for two important reasons: you got two laps instead of one, and it had a product education component. The idea was to show consumers the benefits of the new traction control system, so the drivers first took a lap with no assist and then went off the road, a lot. The brand ambassador then put on the traction control and began the second lap, which was considerably smoother. So, it was longer, and more content-driven. Done and done.

Many of the exhibitors went with traditional driving games and were, therefore, boring. The only exception to this was thanks to GM and Microsoft’s Xbox Kinect, which featured five gaming stations, head-to-head PvP and options to drive almost any Chevy, including Camaro vs. Corvette action. The game will be released for purchase on the Xbox, and it was a lot of fun to play with the Kinect and watch the other players spin and dance, trying to do tricks while staying on the road and in the lead. This one was a solid good time.

And then there was Honda. Seriously, what was up with the Eco Assist Challenge? We sat in a bucket seat console in front of a steering wheel and thought we were about to find out that you could have fun and still be eco-conscious. Turns out, Honda wanted us to know that, no, you can’t. The idea was to drive as responsibly as possible and if you didn’t meet the game’s standards or accidentally started having fun, it restarted the lap. Most frustrating .3 miles we ever tried to drive. And we used to own a moped.