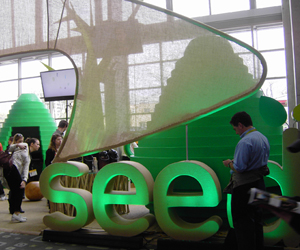 Inside The SXSW Lounge Circuit

The Austin Convention Center is ground zero for the South by Southwest Interactive, Film and Music Festival and the central hub for sponsor activations. This week, EM toured them all (plus a few off the beaten path) and found a collection of laidback lounges where people could recharge, refresh, and in some cases, enjoy a nice cold drink. Here are some of the highlights:

AOL
To generate maximum awareness for its seed.com platform where professional writers, photographers and others can submit their work, AOL planted the AOL Seed Lounge inside the Austin Convention Center where the foot traffic was heavy all day long. The company exploited the organic vibe of the seed.com brand by creating a whimsical kids’ playground (tire swing and all) where attendees can take a breather and grab a seat on cushions and couches scattered about or seek more privacy in green beehive-like cocoons where laptops are on hand. Attendees can snack on seeds and popcorn and sip Monster energy drinks (also a sponsor) and hot beverages. At the front desk, a brand ambassador mans a large flat-screen display that demos how the site works for those who visit the lounge for more than just a respite.

Chevy
Outside the Convention Center, Chevy put some of its coolest rides like the Camaro on display and available for test drives, but inside it was all about the Chevy Volt. At its Chevy Volt Recharge Lounge the company plays up the “recharge” theme by providing endless outlets where attendees can charge up their phones, laptops and other electronic devices. The space includes a mini bar with samples of SoBe beverages (also a sponsor). Folks can take a break from the festival in communal areas with couches and tables, at a bar or at tables for two. Informational banners about energy usage greet attendees and brand ambassadors are on hand to answer questions about the Chevy Volt mobile app.

PepsiCo
In addition to its daily podcasts on topics like Women in Social Media broadcast from its PepsiCo Podcast Playground, Pepsi is also activating the Pepsi Refresh Café. At the front desk, the brand serves samples of the beverage against a wall that separates a more intimate seating area from the busy show floor. The space features décor in the brand’s signature white, red and blue colors with cool round rugs made to look exactly like its logo. The showstopper at the Café is a wall display that spells the word “vote” with four flat screens. Laptops corresponding to each letter sit atop transparent glass cases filled with Pepsi cans where attendees can vote for a number of socially conscious ideas like funding for more quality after-school programs; to participate, they provide their email address with an option to take the conversation directly to Facebook. Closer to the crowds, Pepsi features a flat-screen TV display running Pepsi Zeitgeist, a digital platform that compiles Twitter feeds about SXSW.

SoBe
Across the street from the Convention Center, SoBe beverage stands out among the rest on the Brush Square Park lawn with its South Beach-like activation marked by a white tent with palm tree designs on it, modern café tables and chairs, comfortable seats and a SoBe beverage bar. The highlight of the lounge is an interactive that features two laptops with corresponding flat screens above them that invite people to take photos and then customize them with all sorts of fun elements, such as a moustaches and tattoos. Once they are done with the photo, they can email it to themselves or opt for the “Fool a Friend” option to send to as many friends as they like. EM’s Sonia Andresson-Nolasco fooled a friend with a face tattoo saying, “It’s a Thug’s Life” (irresistible!).

ZonePerfect
A few blocks from the Convention Center on Neches Street, ZonePerfect nutrition bar opens its doors at 2 p.m. daily, showcasing one of the coolest lounges of all dubbed the “live. create.” lounge. Totally in touch with the event’s target audience (artists of all kinds and tech aficionados), the brand set up inviting art stations that tap into the heart and soul of SXSW. The first station offers a 12-canvas wall with brushes and paint beneath it to allow attendees to express themselves, followed by a silk screener that offers three types of t-shirt designs: a guitar, an animal skull with movie reels for horns and a cowboy riding a cell phone. At a wall of words (featuring words like app, Facebook, acoustic and others) people construct their own conversation on the wall and visit nearby laptops to enter for a chance to win an iPad, a trip to SXSW 2011 and a $15 iTunes gift card. A stage is also set up for live music performances by artists like Ben Alper and Anna Laube.

IFC
A stroll off the beaten the path takes attendees to the Independent Film Channel’s Crossroads House on Brazos Street (just off Austin’s famed Sixth Street). Inside, there’s a studio where YouTube and Google held a session March 15 on the history of film. Like in the other lounges, attendees can charge up their phones and sit down in a café-style area to watch the action in the studio on flat-screen TVs. Starbucks? No need. Powered by freecreditreport.com, the lounge features a full service espresso concoctions bar (iced or hot), a SEGA gaming area (Aliens vs. Predator) and a photo activation that allows visitors to pose in front of the Austin skyline and print out as many copies of the photo as they would like. In addition, the photos are available on a laptop where people can email it to themselves or send to Twitter or Facebook.