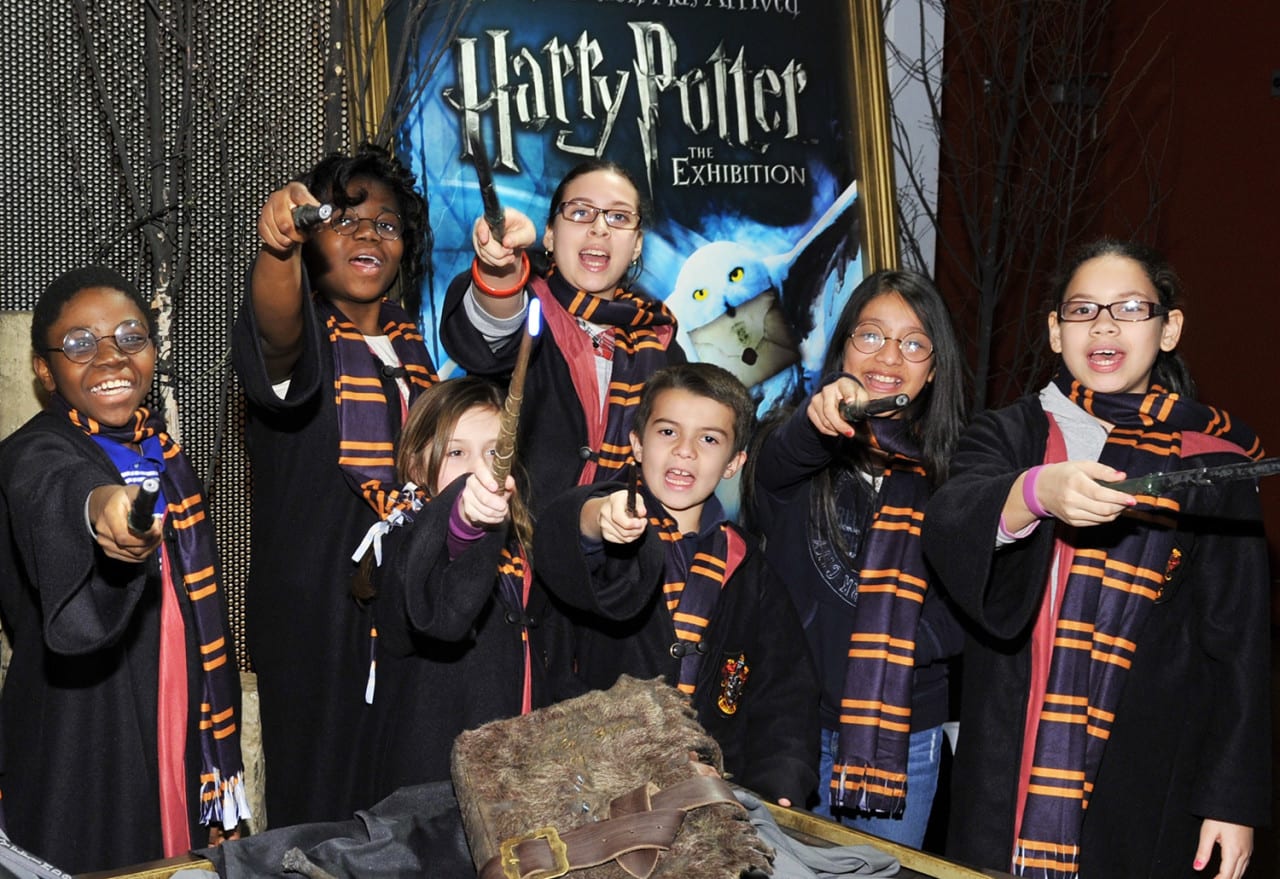 From characters to costumes to replica sets, fans are taken on an experiential journey 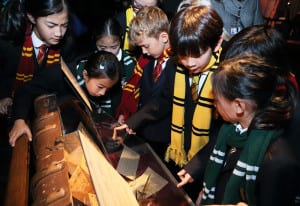 Harry Potter: The Exhibition is packed with as many teaching moments as it is moments of pure entertainment.

Since it first opened its doors in 2009, Harry Potter: The Exhibition has immersed millions of fans into the world of J.K. Rowling’s iconic character. The exhibition, which opened in Chicago and is on view at IFEMA Madrid, last year announced its extension until 2020, bringing millions more people into its magical, mystical fold. But besides opening the book on Hogwarts School of Witchcraft and Wizardry, the exhibition itself is an education in experiential marketing, offering event marketers lessons on how to create dynamic experiences that forge a lasting, emotional connection with target audiences.

“We know there is an audience that wants to touch this brand and this experience,” says Peter van Roden, svp-global themed entertainment at Warner Bros. Consumer Products, which owns the licensing rights to the Harry Potter franchise. “The goal was to create something authentic, something that evokes an emotional response from the guests, get it to key locations… and satisfy some of that fan demand.”

Most traveling exhibits and museum experiences never realize the success achieved by Harry Potter and its array of film sets, costumes, props and creatures. As van Roden puts it, “There are certain franchises that can garner this level of exhibit, but you can’t do it with all brands.” Especially today, with social media and an educated public that checks out an event before they plunk down their hard-earned dollars to buy a ticket.

Still, there are a number of components that have gone into Harry’s success, and they provide valuable insights for brand marketers of all stripes. So, slip into your Gryffindor robe, grab your magic wand and follow along as van Roden and Eddie Newquist, chief creative officer at handling agency GES, uncover the secrets of Harry Potter: The Exhibition. 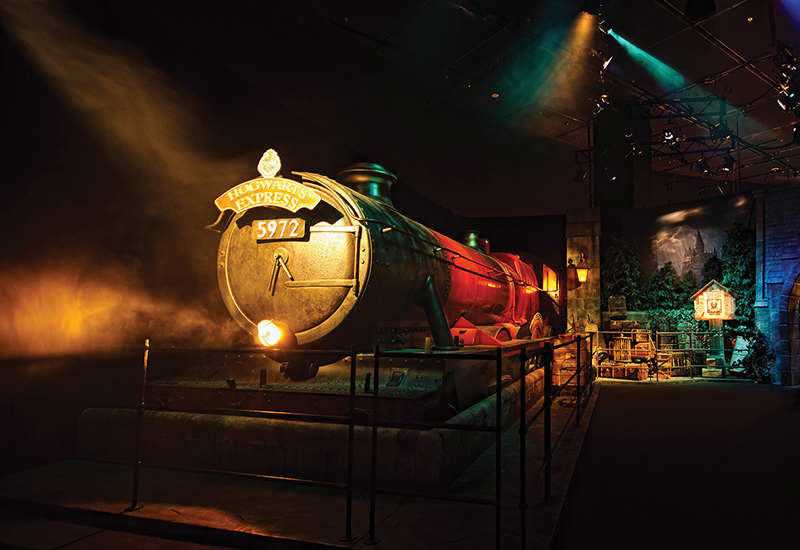 The belching smoke from Hogwart’s Express steam locomotive sets the scene for the storyline from the very beginning.

The belching smoke from Hogwarts Express steam locomotive and the movies’ theme music set the scene for the storyline from the very beginning. A host portraying a professor from Hogwarts School greets the crowd and introduces the experience to follow. The professor then “sorts” a few lucky fans into their favorite Hogwarts houses (“sorting” is a key moment in the books and movies), then leads the crowd inside the exhibition, where their journey begins. Attendees enter the classrooms, defend against the “dark arts” by going through the Gryffindor common room and dormitory, enter into Hagrid’s hut at the edge of the Forbidden Forest, then venture into the forest itself. The experience ends in a recreation of the Great Hall, where many of the films end with big celebrations and feasts.

“We laid it out in such a way to make sure that not only do you feel you are on a physical journey, but an emotional journey as well,” Newquist says. “We took that storyline and created these moments where there is some human interaction, some fun and laughter, a little bit of scare and apprehension, followed by a celebratory climax, a story arc and journey that creates great memories for the guests.”

Newquist and his team spent a great deal of time thinking about crowd control, knowing that long lines, whether they’re at an amusement park or a fan activation at a sporting event, are frustrating. “That’s not the way to start any experience, so we decided to do timed ticketing,” Newquist says. “Yes, people are excited and may show up an hour early, and if we can let them in we certainly will, but we definitely allow them to enter at the time reserved for them.”

People coming to an exhibition, theme park or sporting event with their kids in tow often face high admission fees that make them dig deep into their pocketbooks. The organizers addressed this issue by looking at fair market value. “When we enter a New York City or a Chicago, a Tokyo or even Brussels, we look at the going rates for other types of experiences where there is a diverse demographic, where there are families involved, where they are experiencing a high-quality product, and we price it at that point,” Newquist explains. “And so we work with the local cities and the convention visitor bureaus to make sure we are charging a fair market value and that we are allowing the largest number of people to attend and enjoy it.” 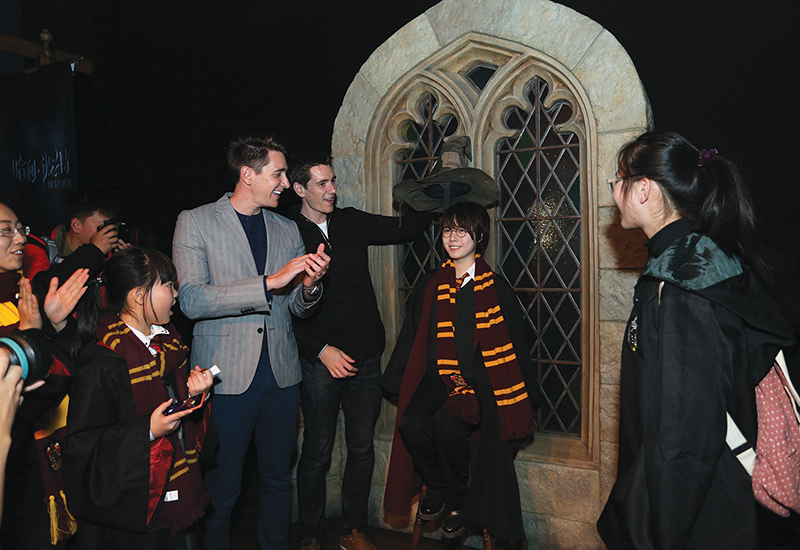 From characters to costumes to replica sets, fans are taken on a journey, complete with an experiential story arc.

When the exhibition first opened in 2009, photography was strictly verboten, a policy it reversed a few years back. “We spent so much time making sure the quality of the exhibit was good, and wanted to make sure it was represented in a quality way,” Newquist says. “A blurry cellphone photo just wasn’t going to do it justice.” These days people may take photos throughout the entire exhibition and post them to social media.

The initial banter with the professor in the sorting hat area makes people feel welcomed and opens them right up. From there, guests in the Quidditch area can toss a Quaffle (fans of the books and movies will know what that means), pull their own Mandrake in the Herbology classroom vignette (same here) and even tour a re-creation of Hagrid’s hut and plop down in his giant-sized armchair.

The exhibition’s displays of the film sets, costumes, props and creatures that immerse guests in this special world are in safekeeping throughout the space. Small hand props in thematic cases give guests close access but don’t allow them to touch. Costumes hang on pedestals behind rails, slightly out of reach but still part of the overall ambiance. “We created an environment around the things in such an immersive way that you feel like you are living the film, you feel like you are walking into this world, and while there are some things that are protected, you get the sense that it is very open,” Newquist says.

Chandeliers, set walls from the films and other elements aren’t even labeled. “Yes, they are authentic to the film, but that’s not the story we were trying to tell,” Newquist says.  “We didn’t need to go crazy and put labels on everything. We want to make sure that people are focused on the things that have the most emotional impact on their journey.” 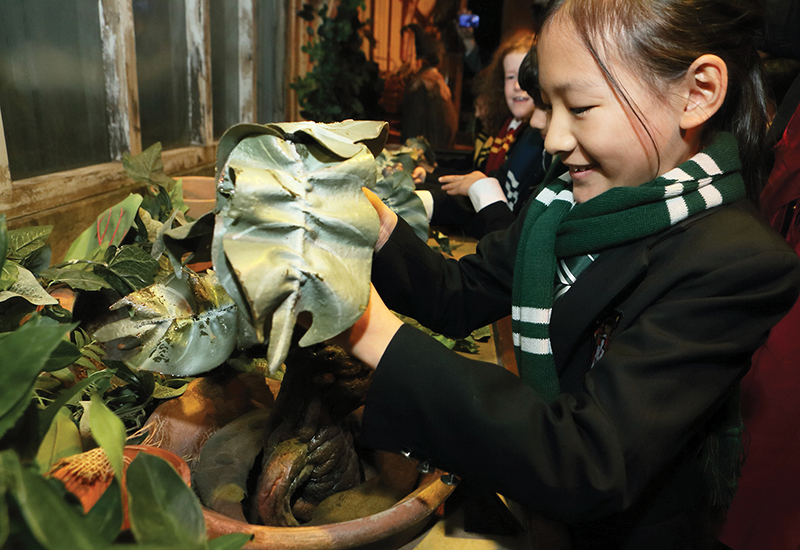 Interactives, including a chance to uproot Mandrakes in the Herbology classroom vignette, enhance the visitor journey.