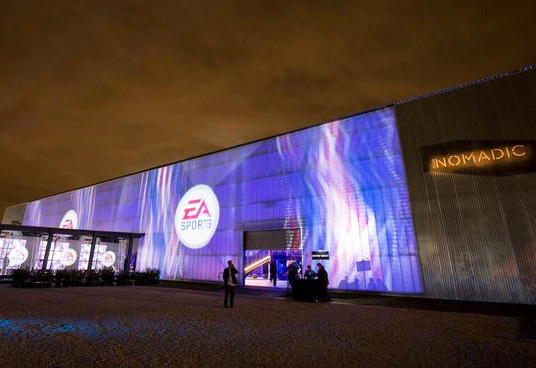 Video game developer EA Sports kicked its Super Bowl sponsorship into high gear this year with gaming tournaments, performances by top musicians and its biggest activation footprint to date. The highlight of the brand’s on-site presence was the inaugural EA Sports Bowl, held Feb. 3 in Houston at Club Nomadic, a 60,000-square-foot pop-up nightclub. The activation served as an expanded version of the brand’s annual Madden Bowl experience, which this year placed more emphasis on fan engagement, including inviting some members of the public to attend the historically invitation-only experience.

The event kicked off with Madden NFL 17 and FIFA 17 gaming tournaments that featured NFL players, high-profile gamers and other celebrities duking it out on the main stage where a massive screen gave everyone a taste of the action, and ESPN’s Trey Wingo provided commentary (the Chad Ochocinco vs. 2 Chainz matchup was a crowd favorite). When the players weren’t competing for gaming glory, they could often be found with other influencers and celebrities sipping drinks inside the venue’s VIP area.

Later in the evening, musical performances by Snoop Dogg, country artist Sam Hunt and Grammy-nominated EDM duo The Chainsmokers revved up on-site attendees, while cameras spread throughout Club Nomadic allowed EA to push content, including live streams, out to virtual fans via Twitter, Snapchat and other social channels.

Engagements also extended beyond the Club Nomadic experience. As has come to be expected since 2004, the brand’s Super Bowl presence was initially marked by a video game simulation of the big game, which leverages the latest version of its Madden franchise to predict the outcome of the competition (this year’s prophecy was close, forecasting a Patriot’s victory with a final score of 27-24). EA also activated at the NFL Experience at the George R. Brown Convention Center, offering attendees a chance to play the Madden mobile game or Madden NFL 17 on HD consoles. Fans could also participate in a photo engagement that placed them on the cover of the game, which they could share across their social channels.

“This is the one time of year where we really lean into the fact that EA Sports is a lifestyle brand,” says Randy Chase, senior director-strategic alliance marketing at EA Sports. “There are the games themselves, but we have our roots in music. The soundtracks on all of our games have become a big part of what our games are about and what we’re known for. And it’s an opportunity on the biggest stage in sports in North America to showcase all of the things that EA Sports is about. There’s the on-the-couch playing with your friends gaming aspect, but then there’s the music, the entertainment, the lifestyle piece to what we do, and that’s what the [sponsorship] does for us.” Agency: In-house.