Amazon Touts 'The Tomorrow War' with Stunts, Screenings and Takeovers 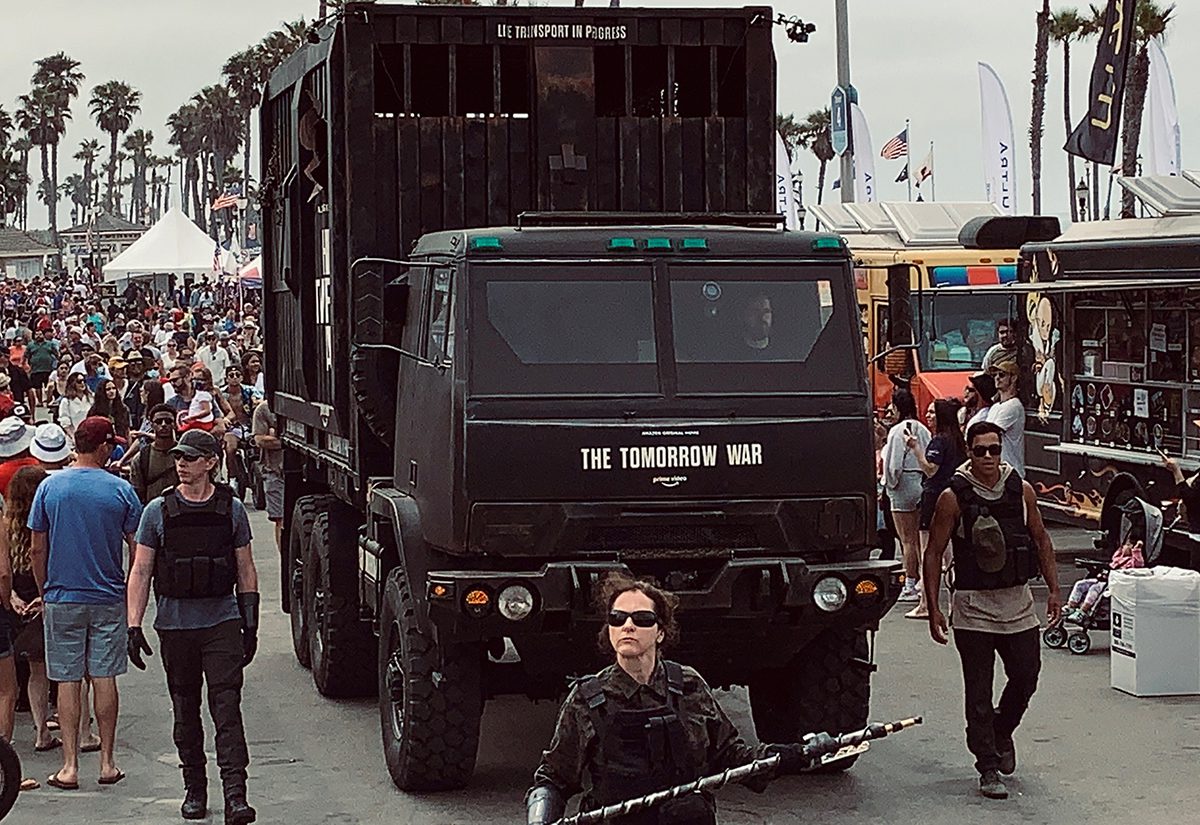 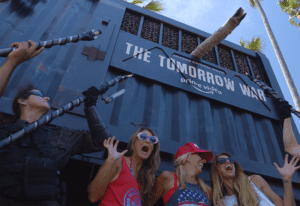 The year 2020 was one without summer blockbusters but Amazon Prime Video made up for lost time in July with the debut of its original movie, “The Tomorrow War.” On the heels of several other successful film launches, the brand unleashed a global experiential campaign to promote the new flick and position itself as a home for blockbuster entertainment.

“The Tomorrow War” is a sci-fi thriller starring Chris Pratt about a group of time travelers that arrive from the year 2051 to deliver an urgent message: Thirty years in the future, mankind is losing a global war against a deadly alien species called the White Spikes. Amazon drew on several of the film’s themes in its marketing efforts, from science to family to military, to bring the story to life. Playing to a global audience and leaning on the Amazon ecosystem, the brand activated Twitch takeovers, virtual watch parties, consumer gifting, curated screening events and grassroots regional activations.

But perhaps the most memorable aspect of the campaign was the global White Spike invasion that kicked off directly after the film’s in-person premiere event. Prime Video executed a “live cargo” transportation stunt across Los Angeles and Huntington Beach from June 30 to July 4, giving onlookers a sneak peek at the alien species from the film. The White Spike was secured under sedation but often poked its animatronic tentacle outside the truck to surprise passersby and those stuck in holiday traffic. Accompanied by a “military convoy,” the alien could be seen at hot spots like Hollywood & Highland, Venice Beach and the Huntington Beach 4th of July parade. White Spikes were also “captured” in Chile and Japan, and traveled through high-traffic metropolitan areas like Tokyo’s Shinjuku, Shibuya and Harajuku districts.

“It takes a lot of operational coordination and strategic planning, especially with a global service like ours,” says Jared Goldsmith, global head of action and thriller marketing at Amazon Prime Video. “We’re available in over 240 different countries, so it was translating and localizing into multiple languages. But it also takes creativity and all the teams aligning around a strategy and being able to develop creative that’s going to resonate globally, but still have local relevance.”

For obvious reasons, watch parties and screening events were a key part of the programming. Ahead of the premiere, Amazon worked with the U.S. Military and Department of Defense to offer advanced screening experiences for members of the armed services and their families at five military bases across the country. In celebration of Father’s Day, Pratt also surprised four deployed fathers and their families via zoom, providing dinner and a peek at the film.

And then there were the social media watch parties. During a Twitter Watch Party, in collaboration with the cast and creators of the film, fans were joined by IMDb, Amazon Student and key influencers to discuss the movie on the platform. To drum up buzz for the event, Prime Video partnered with Fooji to give fans a chance to win branded movie kits complete with popcorn and candy to enjoy while live-tweeting. Select kits included a custom movie poster, and 10 lucky fans also won roundtrip airline tickets courtesy of Alaska Air. To boot, the brand created a Twitch takeover and watch party in partnership with popular Twitch streamer DrLupo. During the takeover, a futuristic exact replica of DrLupo’s streaming room appeared to be ravaged by the White Spikes, and the audience was able to view a virtual world where mankind’s only hope was reliant on scientists’ ability to draft soldiers from the past. The stream then led into a shout-out from Pratt before moving into the watch party.

Speaking of social media, Pratt and other cast members were highly involved in the campaign, using their own social channels to engage with fans and promote the film. Pratt even orchestrated a “Creator Draft” challenge on TikTok, recruiting eight top creators to make a video inspired by “The Tomorrow War” in under seven days.

“I try not to think about social media as this broken out piece of a campaign; it truly is part of everything we do,” says Goldsmith. “Talkability is always such a huge goal of ours. Part of what our approach is, is paying attention to what is going on culturally, and with the U.S. government unlocking previously classified UFO files, it timed out really nicely for the movie. We actually released an unbranded video shot as if someone had just seen one of our White Spike aliens out in the wild and it got over 20 million views. People were talking and speculating and it was really fun.” 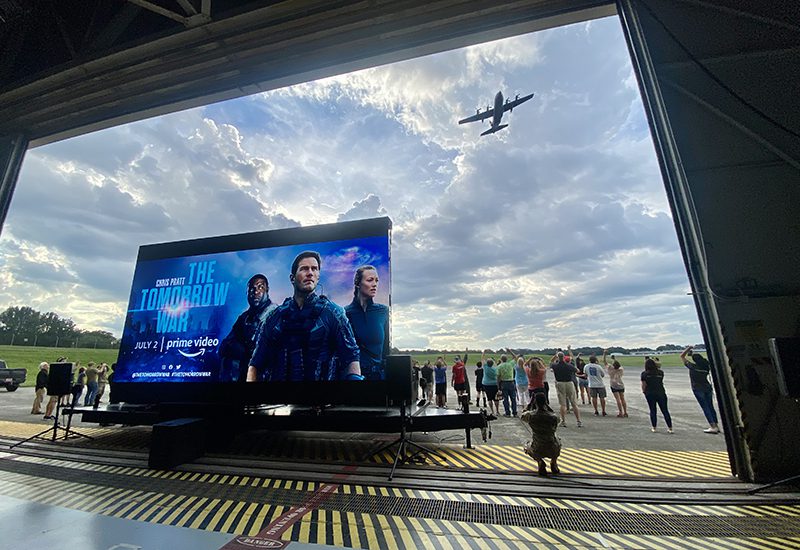 Advanced screenings for members of the armed services and their families were a nod to the film’s military theme.

Partnerships were a key piece of the campaign strategy. Prime Video worked with NASCAR to attract new audiences by sponsoring the Pocono Raceway Doubleheader Weekend, June 26-27, and providing fans with ticket giveaways and raffles for high-end prizes. The brand also sponsored Nobu x Bootsy Bellows’ annual 4th of July White Party in Southern Cali, an exclusive, invite-only event attended by celebrities and VIPs, which coincided with the timing of its live cargo stunt.

And then there were the grassroots collaborations forged across 40 U.S. markets. The brand partnered with regional science centers, teachers, military organizations, STEM groups, sports teams and gyms to drum up excitement for the debut of “The Tomorrow War.” Highlights include a Worcester Red Sox game night takeover, a screening giveaway for more than 1,000 local teachers at Chicago’s Schaumburg Boomers Professional Baseball Team’s special educators appreciation night and a military night partnership with Urban Air Adventure Park for military families in Minneapolis.

To underscore the film’s alien theme, Prime Video also developed a retro Space Invaders-style digital game that let fans experience “The Tomorrow War” from the White Spikes’ point of view. To amplify the game, the brand worked with big-name influencers like Calfreezy, Doigby and Ibai, sending them fully-functional White Spike arcade machines to play it on.

The brand additionally partnered with the UFC, Papa John’s and Philips Norelco. 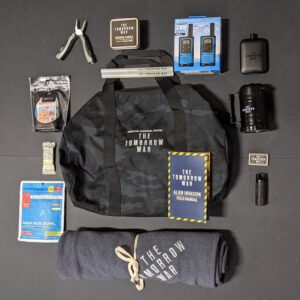 In celebration of Father’s Day, Prime Video sent branded time capsules to families to encourage them to fill the devices together, alluding to the film’s time travel theme. In addition, the campaign, both domestically and internationally, included the distribution of branded alien “conflict kits” with all of the essentials needed to survive a future alien invasion.

In the end, Goldsmith says the campaign was a “great success” and that the “global [viewership] numbers were huge.”

“There’s still something great about having that tangible experience where people are able to connect with a movie or a series or a brand, so we wanted to make sure we were connecting with audiences in a really organic way,” he says. “I really think that those real-world, real-life experiences with a brand are incredibly important to building connections.”