The Yard Puts Dickies Pants to the Test - Event Marketer 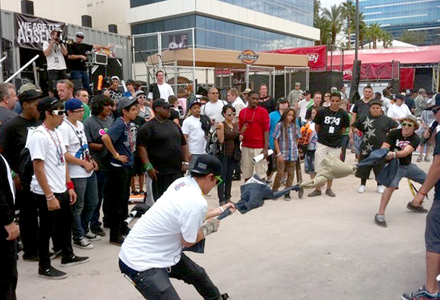 The Yard Puts Dickies Pants to the Test

On Oct. 31, workwear brand Dickies wrapped up a mobile experience called The Yard at the Voodoo Festival in New Orleans in which consumers tried to destroy its work pants with sanders, razors and weed-eaters. The effort was part of an integrated campaign that includes TV ads and social networking sites that reinforce Dickies’ workwear heritage and its original 874 work pants.

“The Yard is designed to represent what Dickies stands for in terms of being authentic and real, gritty and tough,” Michael Polydoroff, senior director-brand marketing at Dickies, told Buzz. “We wanted to take those brand attributes all the way to the physical experience so consumers came away with the idea that the 874 work pants are tough and durable and can stand up to the wear and tear of working, skateboarding or running around town.”

The Yard kicked off on June 25 in Seattle with a three-day event at the Capitol Hill Block Party that featured bands that performed on a stage built from a refurbished boxcar. Next to the stage in a chain-link dugout designed to look like a shipping yard, attendees put the pants to the test in a 874 work pant tug-of-war and other trials in which they had 8.74 seconds to try to destroy the pants with sanders, razors, weed-eaters and cheese graters. If they succeeded, they received a free pair of pants. “It was a fun way to show people we’re not kidding—these pants are not going to buckle under pressure,” Polydoroff said.

The Yard also housed an area where all 31 colors of the pants and Dickies’ plaid shorts were on display while a loop played commercials and content from previous events. A VIP area inside the boxcar served as a place for band members and fans to hang out. Chairs in the VIP area were covered in the twill fabric used to make the pants. Brand ambassadors used iPads to show attendees Dickies’ ecommerce site, dickies.com. Those who signed up received a discount for purchases on the site. Staffers also tweeted during the event to draw people to The Yard and promoted it on Facebook and YouTube.