B-to-B Events, Technology
Posted on May 5, 2020 by Rachel Boucher 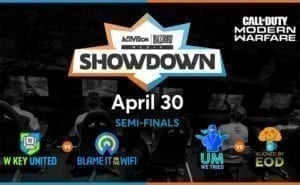 32 teams were randomly selected from a pool of registrants to battle each evening in the virtual esports tournament.

In the wake of canceled events and social distancing orders, media brands are developing pivot programs that offer hospitality-minded engagement to connect with potential clients. For Activision Blizzard Media, the b-to-b arm of the gaming company, esports was a natural platform to leverage for the “Agency Showdown,” its first-ever virtual esports tournament exclusively for the ad agency community.

Beginning on April 21, 32 teams of agencies were randomly selected from a pool of registrants to battle each evening at around 4 p.m. Eastern in Call of Duty: Modern Warfare. The action was streamed live on Activision Blizzard Media’s YouTube channel, where spectators (from colleagues to agency competitors) could chime in through the chat feature. Throughout the tournament, U.K. esports rising star Brody “NFinity” Lyon served as commentator, and offered detailed explanations of what was happening so that spectators who don’t normally watch esports or aren’t necessarily fans of Call of Duty could understand what was happening as they watching the live gameplay. A championship match took place on May 1. Team W Key United was crowned the grand champion.

In addition to engaging clients during a period of needed distraction, the tournament allowed Activision Blizzard Media to promote its brand new multi-year strategic partnership with Google Cloud as the preferred host for Activision Blizzard’s games and YouTube as the exclusive streaming partner.

“As live events were getting canceled and states were enacting shelter-in-place rules, we were in the midst of releasing a new product offering around our esports leagues, Call of Duty League and Overwatch League, in partnership with YouTube Gaming,” says Madden. “It really was the perfect time for us to explore what we could do to benefit our clients at home, but also translate that into a new opportunity we have for them within esports.”