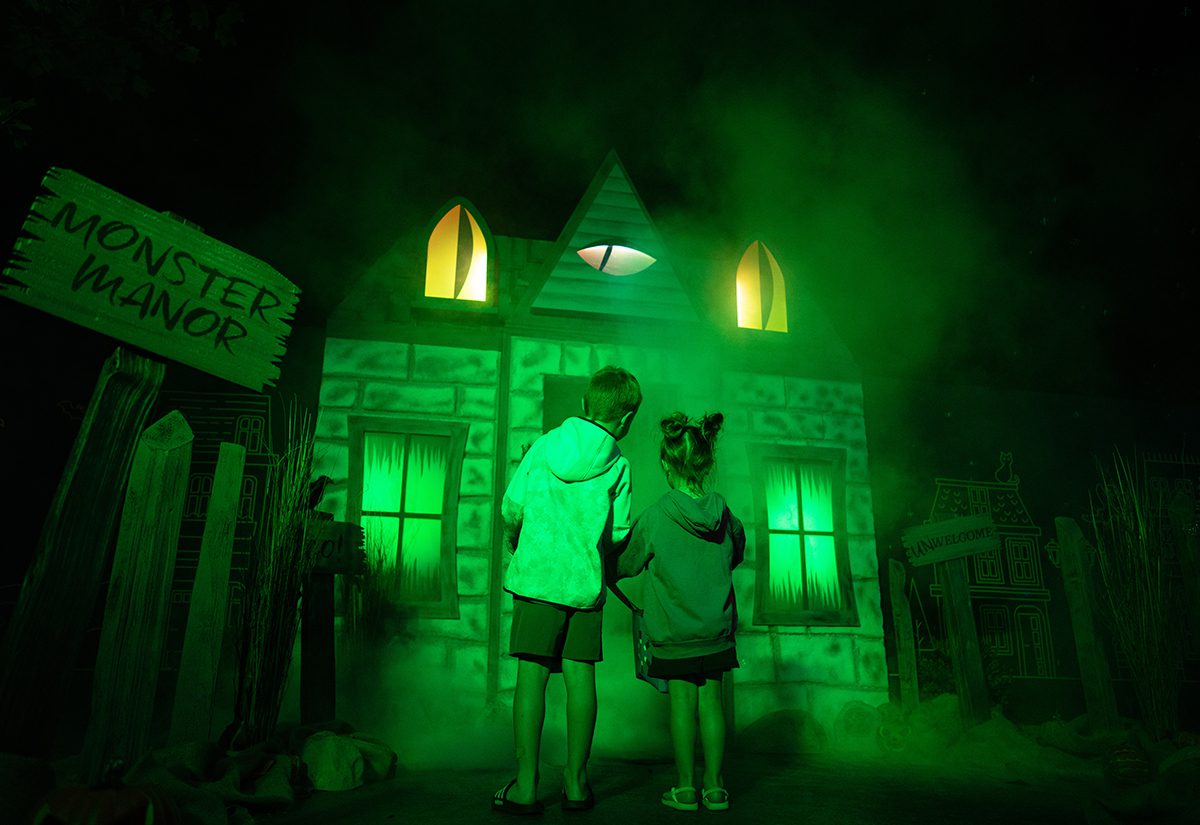 There’s something about Halloween that inspires scary-good experiential programs, and this year was no exception. With greater opportunities to activate after a low-key 2020 Halloween season, a variety of brands came out to celebrate with spooky pop-ups, haunted houses and other immersive experiences built to send chills down attendees’ spines. Some even went as far as to design experiential costumes. There were plenty of experiences to choose from, but we rounded up nine killer Halloween activation strategies worth stealing. Now grab your candy pail, it’s time to trick-or-treat (just don’t expect any candy corn).

More From the Halloween Archives:

What’s scarier than ghosts and ghouls? Getting raisins instead of candy on Halloween. So raisin brand Sun-Maid boldly leaned into the sentiment and took over a home in New Jersey to create a spooky “Raisin House” with tongue-in-cheek messaging. Leading up to the holiday, consumers could view raisin-themed Halloween decorations, like a creepy cemetery, on the home’s exterior. Then, on Halloween, visitors could walk up to the front door and grab Sun-Maid snacks from an “interactive hand-sampling wall” featuring a mix of both decorative and real hands. Consumers could also enter the house, if they dared, to experience a “scare corridor” where zombies dressed in red bonnets (a nod to the brand’s mascot) were distributing samples and offered visitors a place to confess their rai-sins.

To boot, those same zombies participated in a local Halloween Zombie Run, handing out more Sun-Maid samples along the way. And on social, Sun-Maid promoted a sweepstakes encouraging people to use TikTok to “Tell Me You’re the Raisin House Without Telling Me You’re The Raisin House.” Well played, Sun-Maid.

Uber is known for its immersive Halloween rides and this year the rideshare service wheeled around in three pop-culture-themed vehicles: The “Scooby-Doo” Mystery Machine in Atlanta, the “SpongeBob SquarePants” Patty Wagon in Los Angeles and the “Teenage Mutant Ninja Turtles” Party Wagon in Miami, each offering riders themed face masks to match the vehicle they were in (masks are required on all Uber rides). The tricked-out vehicles were hard to miss, from the “SpongeBob” Krabby Patty-inspired wagon to the retro “Ninja Turtles” van featuring a giant, LEGO-like door. Users couldn’t specifically request the rides, so when they scored one, it was an added layer of surprise and delight. The “Famous Rides” were available Oct. 29-31 at standard Uber X pricing and fit up to three people.

Freeform’s annual walk-through Halloween Road experience returned to Los Angeles this year, kicking off the network’s popular “31 Nights of Halloween” programming. The socially-distanced outdoor affair brought to life some of the most celebrated Halloween entertainment properties, including “Tim Burton’s The Nightmare Before Christmas,” “Hocus Pocus” and “The Addams Family.” Other surprises, games, photo moments and entertainment experiences were also part of the mix. Ticket prices started at $37.

To highlight its “Now Screaming” content initiative and celebrate spooky season, Amazon Prime Video brought to life some of the creepiest titles streaming on its platform at a House of Horrors pop-up shop on Melrose Ave. in West Hollywood. The experience featured show-inspired costume displays from Amazon Originals like “The Voyeurs” and “Black As Night.” Visitors could shop the costume displays via QR codes and have them shipped directly to their doorstep. There were also Easter eggs, a Halloween candy kiosk offering tote bags filled with treats and plenty of photo moments, including a selfie mirror and photo booth, which created chilling “movie stills.” Consumers could also experience a special activation from Oct. 14-16 celebrating the debut of Amazon’s “I Know What You Did Last Summer” series in partnership with OPI.

A partnership between a telecom company and America’s No.1 Halloween candy brand? Believe it. T-Mobile and Reese’s teamed up for “Apartment 5G”—the “ultimate” trick-or-treating destinations, which promoted T-Mobile’s 5G network. Leveraging three of T-Mobile’s retail locations around the U.S. and a brownstone takeover in Brooklyn, NY, the brands unveiled the Halloween experience across all four locations on Oct. 31. The hook: Apartment 5G was the only door giving out 10 times the top treats this year (Reese’s) because “sweet” 5G technology can deliver speeds that are more than 10 times faster than LTE. Consumers could walk up to each location and press a giant 5G button, summoning a deluge of Reese’s, including the brand’s exclusive new Take 5G bar. In addition, 10 visitors could win a free 5G smartphone, a year of T-Mobile 5G service and a year of free Reese’s products (sign. us. up.).

Not every Halloween activation took place in person this year. Chipotle, for instance, built a virtual restaurant on gaming platform Roblox to extend its reach and mark the 21st anniversary of its “Boorito” Halloween celebration, which was activated in the metaverse this year, rather than in person. Fans headed to Chipotle’s virtual restaurant on Roblox for a chance to snag a free burrito (users received a unique promo code from the cashier for a free entrée if they were one of the first 30,000 visitors each day from Oct. 28-31), dress their avatars up in new Chipotle-inspired costumes and navigate the Boorito Maze to unlock exclusive virtual items upon reaching its center. Chipotle’s costumes on Roblox, which included a Chip Bag Ghost, Burrito Mummy, Spicy Devil and Guacenstein, were inspired by fan-favorite menu items. The brand’s share of sales proceeds from in-game items were donated to a cause that supports young farmers. (Fun fact: The in-game restaurant location will remain open, suggesting Chipotle will build future experiences on the platform.)

Walmart invited families in 10 markets across the U.S. to take a COVID-safe stroll down Spooky Street, a Halloween activation built in its parking lots. The contactless trick-or-treating experience featured four themed doors within elaborate Halloween environments where costumed attendees could pick up pre-packaged goodie bags and participate in photo ops. Along the way, they met costumed characters, killer audio-visual elements and a few frightful surprises, and were encouraged to practice their best rawrs, howls or boos. Agency: Momentum Worldwide, New York City. 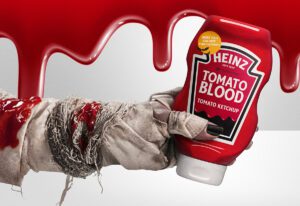 Parents have been using Heinz ketchup to add fake blood to their kids’ costumes for years, so the brand made it official this year, creating a Tomato Blood Costume Kit featuring a bottle of “Tomato Blood” for $19.99. The kit also included a makeup palette, sponge, dropper, makeup brush set, rhinestone sheet, tattoo sheet, vampire wings and spooky eyelashes. To amplify the concept, Heinz produced its first-ever pop-up in Santa Monica, CA. There, consumers could score branded Halloween merch, enjoy “ketchup-enhanced” treats, participate in photo ops and create their own costumes with the help of a Tomato Blood “drip station.” Tomato Blood costume and makeup tutorials were also offered.