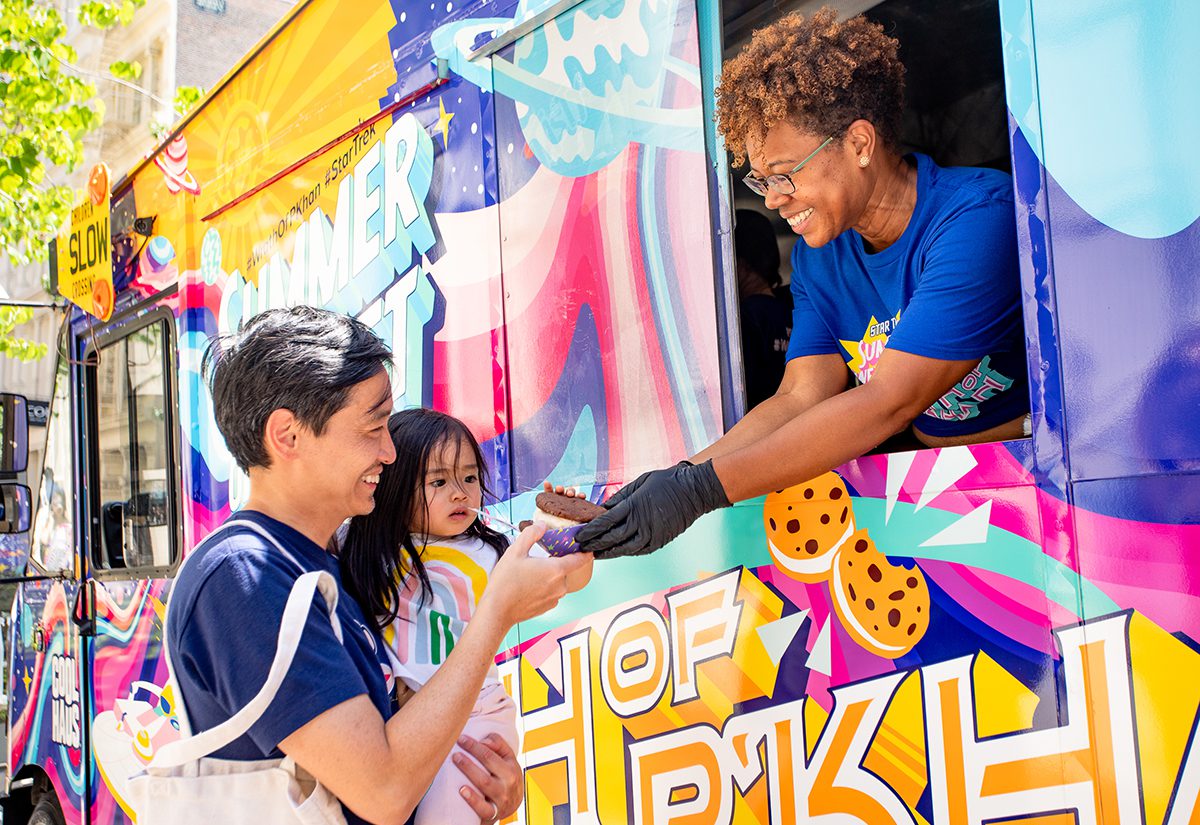 Summertime and ice cream go hand-in-hand, and along with the rising temperatures this season has been a rise in ice cream truck tours. Nimble, straightforward and rewarding for attendees, ice cream truck-based activations are a sweet way for brands to connect with consumers across multiple markets while serving as mobile billboards between stops. Here, we review eight ways the humble ice cream truck is steering experiential strategies this summer.

OK, so our first example isn’t technically based around ice cream. But Kind Snacks kicked off its first-ever national in-person tour on May 25 with the “Better Than Ice Cream” Truck, and plans to dish out thousands of free Kind Frozen Treat Bars across the U.S. through Aug. 8. Samples of the new plant-based product will be distributed in 10 cities. Those who engage with the activation will be immersed in a snacking experience surrounded by real plants (hello, photo op) to visually illustrate that the first ingredient of every Frozen Treat Bar comes from either almonds or peanuts. In conjunction with the tour, Kind also launched a limited-edition capsule collection inspired by the new product. Merchandise includes custom stick-on nails to match the Frozen Treat Bar wrapper, the “Kind <3 Plants” hanging plant waterer and a frozen tote to take the bars on-the-go this summer season. Agency: Tenure.

On July 3, Hood marked the relaunch of its New England Creamery Ice Cream line, inspired by various landmarks from the region, with an ice cream truck tour making stops across Massachusetts, Maine and New Hampshire through Aug. 21. The cherry on top of the tour was an appearance by New England Patriots quarterback Mac Jones at Hood Park in Charlestown, MA, on July 15, where he passed out free samples to the first 100 attendees. The star also teamed up with Hood to create a limited-edition cookie dough flavor dubbed Mac Attack that fans could receive from Jones at the Hood Park event.

To mark Pride Month in June, haircare brand OGX partnered with Black non-binary artist Ggggrimes, who created a striking outdoor mural designed to celebrate the diversity of OGX fans and the brand’s continued commitment to supporting the LGBTQ+ community. For several days in New York City’s trendy Noho neighborhood, the brand invited passersby to admire the artwork and snag a sweet treat from its branded ice cream cart. By scanning QR codes around the footprint and filling out an OGX hair quiz, consumers earned a free, custom ice cream by Milk & Cream. All attendees additionally received coupons for OGX products. Agency: MKG. 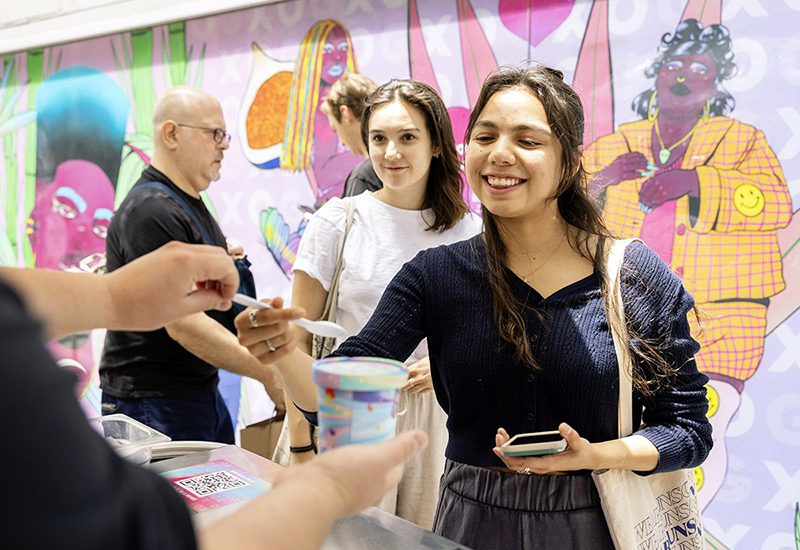 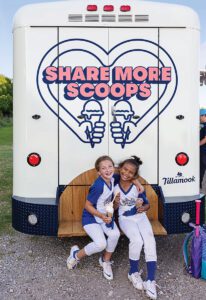 Tillamook is inviting consumers to “share a scoop and a smile” along its ice cream truck tour across Atlanta, Baltimore and Washington, D.C., through Aug. 28. Equipped with a vintage-style truck featuring a wooden bench on the bumper for snapping selfies, the brand is serving up six “extra creamy” flavors (for a fee) and #ScoopCreamier messaging at events like local movie screenings. A partnership with comedian and actress Jenny Slate, an online sweepstakes and weekly social media challenges are also part of the broader “Scoop Creamier” campaign.

To celebrate the 40th anniversary of “Star Trek II: The Wrath of Khan,” Paramount+ hit the road with a branded ice cream truck on a mission to expand the franchise’s fan base and solidify its positioning as the home of “Star Trek” content. Part of its broader Summer of Sweet Revenge campaign, the brand kicked things off on June 4, the film’s anniversary, in partnership with ice cream brand Coolhaus, parking in New York City for the day to dish out complimentary, limited-edition “Wrath of P’Khan” ice cream sandwiches. Passersby could walk up to the wrapped truck, brimming with franchise imagery and a can’t-miss neon color scheme, to grab a treat, learn about Paramount’s “Star Trek” offerings and take a breather. The truck then traveled to Santa Monica Boulevard in time for National Ice Cream Day (July 17), and hit San Diego Comic-Con the following week. 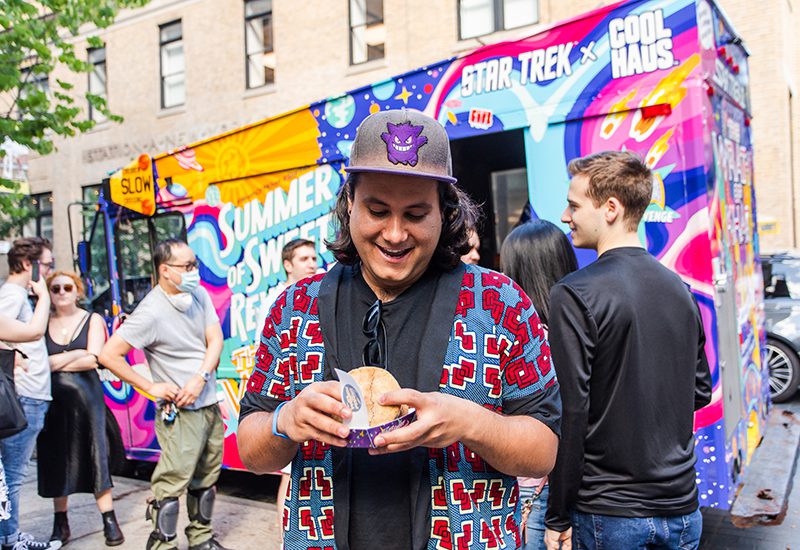 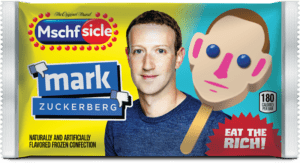 Brooklyn-based art collective MSCHF often lives up to its namesake, and its “Eat the Rich” ice cream trucks, which hit hot spots around New York City and Los Angeles, July 11-13, were no exception. For those interested in taking a bite out of Bezos, Zuckerberg or a handful of other wealthy figures, the collective offered billionaire-shaped ice cream “popsicles” for $10 each. Consumers could also follow the trucks’ whereabouts live through the campaign microsite.

Booking.com made ice cream lovers’ dreams come true in time for National Ice Cream Day last year with the chance to win a sleepover inside a tricked-out ice cream truck equipped with a fully stocked “flavor fridge,” milkshake-making station and all-you-can-eat toppings bar. The program was founded on Booking.com research that showed, among stats, that 70 percent of Americans are willing to give up their favorite vices—like ice cream—to go on a vacation when it was safe to do so.

The fully functioning truck, with its waffle cone-themed bedding, sprinkle-inspired flooring and “Anything is Popsicle” messaging, parked in New York City for two separate consumer stays (July 17 and 18). Winners not only earned a night inside the unique accommodations, but were also treated to an ice cream shop walking tour and tickets to the Museum of Ice Cream. For those who didn’t win, Booking.com offered free, internationally inspired ice cream in Union Square while supplies lasted. Agencies: H&S Communications; Food Truck Promotions. 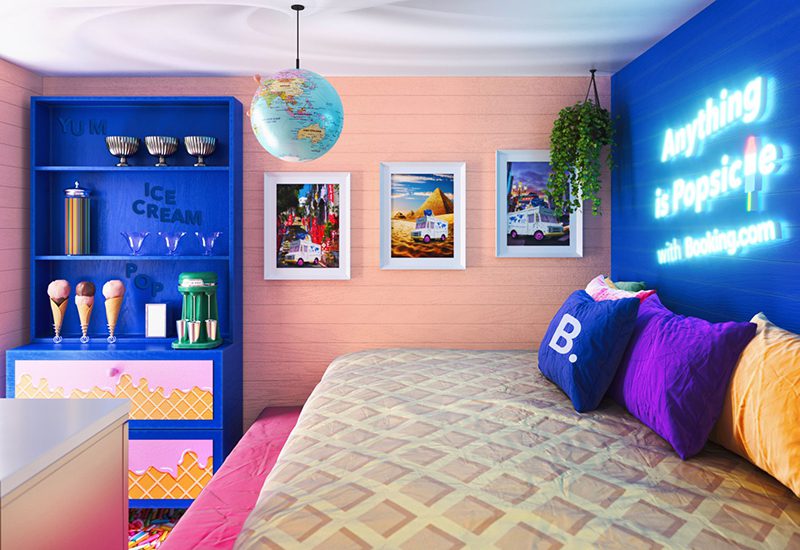 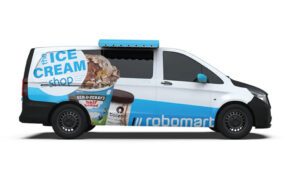 Robots and ice cream? Oh yes. Unilever teamed up with store-hailing service Robomart to deliver ice cream on demand around Los Angeles this summer, and treats from a variety of brands under the Unilever umbrella, from Ben & Jerry’s to Magnum, are available. Consumers can use Robomart’s mobile app to hail a Robomart vehicle stocked with ice cream, unlock its doors and pay for their selections through checkout-free technology. The vehicles even showcase Unilever’s virtual “The Ice Cream Shop” storefront. And once again, convenience and quick service win with post-pandemic consumers.