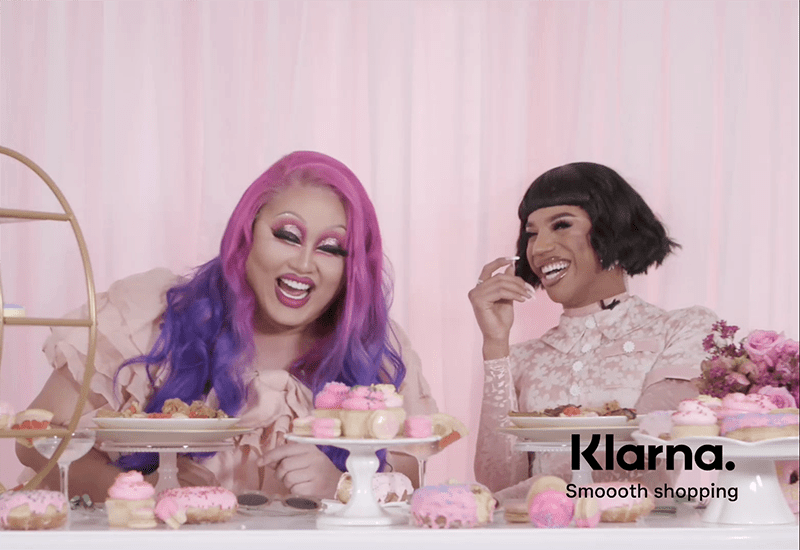 When the pandemic shut events down, brands and properties scrambled to find creative ways to keep consumer audiences engaged without a live setting. And while there was a period of trial and error, most emerged with fresh tactics that fueled clever campaigns—all experienced from the safety of consumers’ homes.

Among the early innovators was payment provider Klarna, which raised spirits and funds for the drag community, which was impacted by the inability to host live performances. The solution: the Breakfast for Dinner virtual drag brunch series. Hosted on Facebook Live by queens Kim Chi and Naomi Smalls, Breakfast for Dinner took place on three consecutive Wednesdays at 8 p.m., offering curated recipes, tutorials, lip sync extravaganzas and plenty of “gag-worthy” looks. For each person that attended, Klarna donated $1 to drag entertainers who have been impacted by COVID-19 (up to $5,000 per brunch).

“In this new COVID world, anything goes, right? There aren’t rules anymore—schedules and routines are thrown out the door. The way we work, the way we eat, the way we stay entertained is not the same. Change right now is really the only constant, and constant change and innovation is what’s core to Klarna’s DNA,” says Megan Gokey, head of U.S. marketing at Klarna.

Klarna found synergy between the brand and the  drag community in their shared desire to do things differently, according to Gokey. And she described the decision to host brunch for dinner as one of  “why not?” Here, we dig into more of the most innovative lockdown engagement strategies to date. 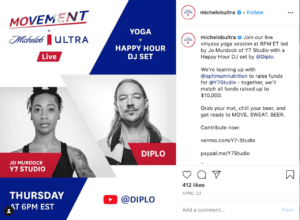 Many privately-owned gyms and studios were closed down amid COVID-19, leaving both employees and customers high and dry. So Michelob ULTRA stepped in with its weekly Movement virtual workout series led by top trainers and private gym owners from across the country who have been impacted by the pandemic. Also featuring special musical guests, the virtual series is available on Michelob ULTRA’s Facebook Live, Instagram Live or YouTube Live channels. Each class ends with a live happy hour and fitness expert Q&A, which pays it forward to local businesses who have been impacted by COVID-19. Participants are encouraged to directly support the trainers hosting the workouts through a Virtual Tip Jar. For each dollar donated, the brand and partner Optimum Nutrition will match the donation, up to $7,500 per week.

File this one under finger-lickin’ clever. When shelter-in-place orders first took effect, consumers flocked to digital streaming services like Netflix in droves to binge-watch the latest content. To capitalize on the behavior and boost engagement, Popeyes dreamed up a “Fried Chicken N Chill” campaign. The premise: Popeyes treats customers like family, and family members share their streaming service passwords. So the brand encouraged consumers to eat its fried chicken (and chill) by sharing its username and password with fans who posted photos of themselves enjoying the activity with the hashtag #ThatPasswordFromPopeyes. 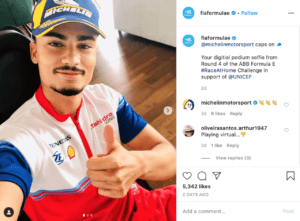 Formula E is shifted its charitable side into gear through a partnership with UNICEF dubbed the Formula E Race at Home Challenge. The nine-week “race royale”-style esports competition, which launched April 18 with a test event, starred all of the teams and drivers from the ABB FIA Formula E Championship, plus a selection of top gamers. The competition helped build awareness of the pandemic and raised funds for UNICEF, which is directing resources to comprehensive emergency projects around the world, such as those contributing to the supply of PPE for healthcare workers.

The race featured two “grids” running in parallel, one featuring drivers from the ABB FIA Formula E Championship, and the other comprised of top gamers and influencers. The winning gamer made the transition from the virtual world to IRL, securing a real-life track time on a Formula E circuit during a race weekend.

Formula E commentator Jack Nicholls, Formula E pitlane reporter Nicki Shields and Indianapolis 500 winner Dario Franchitti served as remote hosts. Fans could tune in to a single 90-minute broadcast combining a race from each grid, or watch each race live on FIAFormulaE.com, as well as on YouTube, Facebook, Twitch and Twitter. A selection of Formula E’s broadcast partners also offered live
coverage and highlights on both linear and digital platforms.

Determined to keep consumers together and toasting to the good times amid the lockdown, Irish whiskey brand Tullamore Dew launched its first-ever Virtual Snug Session series. Inspired by the conversations, music and atmosphere that often define the Irish snug (an intimate pub room), Tullamore is aiming to recreate the same atmosphere in consumer’s homes. Individuals can enter to win a Virtual Snug session with friends by following @TullamoreDew on Instagram and tagging two people in the comments section.

Ahead of each session, Tullamore sends a special cocktail kit containing the necessary ingredients to the participants. During the Virtual Snug Session, brand ambassador Kevin Pigott teaches a cocktail masterclass via video chat, and then delivers a spoken word performance during which musician and Tullamore partner Dan Elliott performs singalong pub tunes. Sláinte!

Cinco de Mayo is an important holiday for Avocados From Mexico so to help consumer audiences celebrate at home, the brand whipped up its #HomemadeCinco campaign. The digital program, which encouraged consumers to mark the holiday with homemade guacamole recipes, centered on a gamified guacamole experience where consumers could enter to win a $500 grand prize sweepstakes by showing off their guac-making chops.

How it worked: Upon visiting a dedicated microsite, consumers spun a digital wheel, which randomly chose an ingredient that would add a little something extra to their homemade guacamole. A recipe with that ingredient was also provided. In partnership with ecommerce grocery platform Chicory, the brand then allowed participants to buy guacamole ingredients online through the campaign’s platform and pick up them at the closest location of their preferred retailer. Through May 6, consumers who posted their creations with #HomemadeCinco, #Guacamole and #Sweepstakes, and tagged @AvocadosFromMexico were entered for the chance to win $50 daily prizes as well as a grand prize of $500.

Bud Light gave the power to the people through its Bud Light Seltzer Sessions: Your Flavor. Your Show platform, a weekly music experience that brought entertainment to quarantined consumers. Kicking off the series on May 8 were artists Romeo Santos with Aventura and KAROL G. The premise? Fans were able to voice their opinions through the artists’ and brand’s social channels to choose event details spanning everything from what color the set should be, to which songs are on the set list to which flavor of Bud Light Seltzer the musicians should sip between songs. Throughout the month of May, the brand streamed shows each Friday night from the Bud Light YouTube channel in benefit of the American Red Cross. 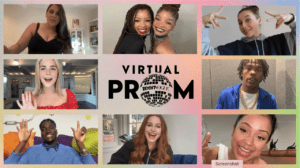 COVID-19 has robbed students of many adolescent milestones, including prom. But on May 16, it was Teen Vogue to the rescue as the publication hosted a Virtual Prom in an effort to provide quarantined youth with some semblance of normalcy. In the weeks leading up to the big night, Teen Vogue and its Virtual Prom Committee offered daily, prom-focused content, from styling advice and makeup tutorials to dance prep and DIY tips, on its website, Instagram, TikTok and in Virtual Prom newsletters.

Presenting sponsor Chipotle followed up the event with a Virtual Prom Afterparty hosted by brand superfan and digital star David Dobrik. The brand invited students to add their names to an afterparty guest list by requesting access to a private Instagram account, @ChipotleAfterParty. The experience featured 10,000 free entrée code giveaways, new product drops, a special Instagram and Snapchat Lens that let attendees take a photo with Dobrik, and a chance to chat with him on Instagram Live.

To help prom-goers all over the country create their looks, Chipotle also collaborated with e.l.f. Cosmetics to develop a burrito-inspired cosmetic set featuring a collection of new e.l.f. products that represented iconic Chipotle ingredients and packaging. One hundred sets were up for purchase from the Chipotle Afterparty Instagram page and e.l.f.’s website. What’s more, Chipotle teamed up with DIY creator Sophie Parker to show teens how to create corsages and boutonnieres for their big night, all using the brand’s famous burrito foil. The DIY demo launched on Teen Vogue’s Instagram Stories leading up to the event.

Speaking of milestones, Natty Light on May 14 cracked open a virtual graduation ceremony for 2020 grads worldwide via Facebook Live. The event featured speeches and advice from the likes of Adam Devine, Mark Cuban, Amanda Cerny, Jane Lynch… and the list goes on.