Getting Up To Speed – Event Marketer 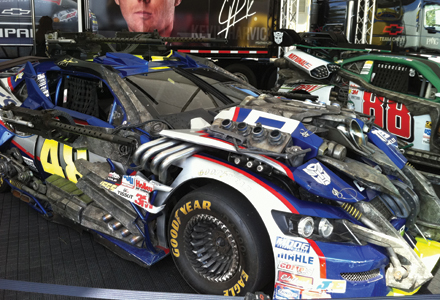 Getting Up To Speed

At this year’s Daytona 500, it wasn’t just the sunny Florida weather that was brighter than the previous year. The sponsor turnout was better, too. According to a recent sponsorship report by independent research provider IEG, NASCAR still has some hurdles to overcome but there is a slight resurgence of corporate interest in motor sports marketing in the U.S. this year. The report finds that North American-based companies will spend an estimated $3.51 billion to sponsor teams and tracks this year, up 4.2 percent from 2010.

If the activations at Daytona are any indication, the research is right on track. Automakers like Ford and Toyota were back in full force this year with a constant flow of fans going through their on-site activations at the event’s official Fan Festival. Newcomers like insurance company GEICO signed a five-year deal with NASCAR to promote its services to campers that travel in their RVs or set up tents at racetracks. And title sponsor Sprint reported having the second best year ever in its eight-year history as a series sponsor.

Indeed, motor sports and its sponsors are on the road to recovery. Here’s a taste of what they were up to at this year’s Daytona 500 and fan events.

FORD
NASCAR events are a big deal for Ford whose research shows that out of 75 million fans of the sport, four million of them attend the races every year. The research also shows that 39 percent of them are new “car intenders,” meaning they’re people that are in the market for a new car. To make sure that Daytona 500’s fans were feeling the Ford love at this year’s event, the brand created a 20,000-square-foot experience with a variety of interactions and an array of 2012 products on display.
Fans who visited Ford’s experience could race remote control versions of the F150 and SVT Raptor truck in an enclosed track. Or they could try their luck at a slot machine-style game focused on its 40-mile-per-gallon vehicles, the Focus, Hybrid Fusion and Fiesta. If the machine showed three “40s” in a row they won a cash prize.

A third game highlighted technology by having fans get inside a Ford Edge and then pop their heads through the sunroof to engage in a two-person game that consisted of one person throwing the other a bouncing ball engraved with a message about technology and then trying to get the ball inside one of four buckets, labeled Entertainment, Phone, Navigation and Climate. Ford-sponsored drivers also came out to the experience for live question and answer sessions on stage with an emcee specializing in the brand’s products. The program garnered 5,300 total consumer registrations; 90 percent of that group opted in for more information about the brand. This number is the highest ever for a Ford on-site activation.

“We have to make sure that the money we’re spending and the support of NASCAR is justifiable and we can calculate the right ROI, because if it isn’t there we have to go into areas that we know we’re getting the best return and NASCAR has one, if not the highest ROI,” says Tim Duerr, motor sports marketing manager for Ford Racing. “That positive ROI is what keeps us coming back into the motor sports arena with smart marketing investments” (Agency: Xperience Communications, Dearborn, MI).

CHEVY
Dubbed the Team Chevy Racing Tour, Chevy created a 200-foot by 100-foot experience that greeted fans with a registration area featuring 30 22-inch touch screen computers that fans could interact with to learn more about the brand and the experience in exchange for some personal information. All registrants got a branded t-shirt. The Transformers display (you guessed it: “More than meets the eye”) showcased three cars that were built and converted into Transformer vehicles to be featured in the upcoming movie “Transformers III” out in July. Hardcore motor enthusiasts were treated to a Performance Parts Display, a four-paneled wall showcasing Corvette and Camaro parts, with accompanying explanations and info on where to find them online. The wall was complemented by a performance parts specialists on-hand to answer any questions. There was also a 400-square-foot stage where the brand hosted Chevy drivers interviewed by an emcee who also provided the crowd with schedule updates and other useful information such as how to use the Chevy mobile app to register for the experience instead of waiting in line.

The activation also featured 13 vehicles on display with inserts describing each car. To demonstrate how much cubic footage is in the back of Chevy’s crossover Traverse, the brand created a game inspired by the video game Tetris, which involved taking six pieces out of the vehicle and then fitting them back inside to win key chains and koozies. The experience also included a photo activation that had fans pose with one of the show cars on display. They received a coded card to retrieve it on a branded microsite where they could customize the photo with NASCAR related items (Technology: eshots, Chicago). Fans could also pose with the Motortrend Truck of the Year trophy on top of the winning vehicle, a Silverado HD (Agency: Performance Marketing Group, Carmel, IN).

TOYOTA
Toyota registered 5,000 consumers at its 150-foot by 80-foot experience, which offered fans fun engagements in exchange for their information, as well as something special for existing Toyota owners. Open to everyone was the Toyota PitPass where fans could play a beanbag tossing game and race with remote control cars. In a motion sensory zone fans could sit down and put on goggles and a headset, push a button and be transported to a virtual racing scene like the Baja 1,000. Inside the PitPass, Toyota snapped  photos of fans with show cars and then sent them via email. Fans were also treated to driver meet-and-greets throughout the weekend. Toyota vehicles, like the Prius, Highlander and Tacoma were also on display with product specialists on-hand to answer questions.
Toyota owners could flash their car keys and gain access to the Toyota Owners Hospitality area. The VIP space had sofas and flat screen TVs, cocktail tables and chairs and offered free soft drinks, hot dogs and hamburgers.

“Though the whole auto industry is still on a slow road to recovery, we’re optimistic and pleased with the number of people that walked through our displays and registered,” says Les Unger, national motor sports manager at Toyota Motor Sales USA. “It was a chance to expose our products to as many fans as possible that attend the races and show them our appreciation with games and prizes and our support of NASCAR to help grow the sport.”

SPRINT
Wireless provider Sprint, the title sponsor of the NASCAR Sprint Cup Series, engaged potential and existing customers with race-related products and driver interviews in a 100,000-square-foot open air space that drew in crowds with its 18-foot by 32-foot Jumbotron airing event related content. Inside, fans were treated to driver meet-and-greets throughout race weekend and could get up close with functioning show cars and the Sprint Cup Series Championship trophy. To get fans in on some racing action, the brand also provided them with eight full-motion NASCAR racing simulators.

Sprint peppered its products throughout the display and created a Sprint mobile app that provided fans with more information about its services and the event, including a live leader board, driver content and live audio, provided by its partners Speed Channel and ESPN. An engaging emcee helped draw in crowds and conducted live driver interviews.

Sprint also made sure to reward its existing customers by having a special section set up for them within the footprint. These fans received premiums like hats, koozies, earplugs and sunscreen. And they could visit the space for one-on-one questions with a product specialist, or for maintenance or repair services to their phones.

“Our research showed that we needed to have live driver interactions at our experience on a consistent basis in order to draw in fans,” says Steve Gaffney, vp-corporate marketing at Sprint. “When you have that as the proverbial carrot for fans, they’ll come and see, and then it’s incumbent upon us once they’re inside the experience to merchandise for them the value of our brand and why we’re involved in the sport” (Agency: Octagon, Norwalk, CT).

U.S. AIR FORCE
Car enthusiasts tend to be fascinated by powerful engines in general, so it’s no surprise that the U.S. Air Force feels right at home at NASCAR events. At the Daytona 500, it treated fans to its “It Factor” personality identifying experience held inside a 50-foot by 40-foot space. To play, fans entered personal information on touch screens and answered questions like “would you rather play video games or ride in a jet?” The game tells them what kind of person they are with a corresponding color wristband. Then they move to two other kiosks that have a series of touch screens on them to play interactive challenge games, such as looking at different colors and matching them up. At the end, fans were driven to airforce.com/itfactor to get their score and play additional games to increase that score and interact with other players.

“The Daytona 500 is the biggest race of the year, so it’s a great opportunity for the Air Force to get in front of a large amount of people,” says Kyle Burnett, account supervisor at the U.S. Air Force. “It’s also a great way for the Air Force to inspire people.” In addition to its Fan Festival activation, Air Force jets flew over the event and new members were sworn in on-site (Agency: GSD&M, Austin, TX).