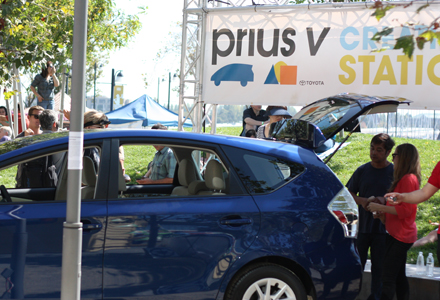 Toyota has rolled out the Prius v Creation Station Tour, a national campaign running from October through mid-December and stopping at outdoor festivals to highlight the Toyota Prius v, the third generation and newest member of Toyota’s Prius line-up. Experiential activations showcase the Prius v’s versatility and features such as roominess, fuel efficiency, sustainability and its Entune multimedia system.

Activities include the Prius v Cargo Challenge, a contest that demonstrates the vehicle’s expanded trunk, which is 58 percent larger than that of other models, by having attendees compete to fill its cargo area. Attendees also can spin a prize wheel, create Shrinky Dinks and color-on t-shirts at kids’ art stations, have their photo taken in a photo booth and enter a sweepstakes to win a new Toyota Prius. Product specialists are on hand to demonstrate the car’s Entune system.

“We launched the Prius v Creation Station Tour to show potential buyers across the U.S. how this vehicle fits with their active lifestyles,” Keith Dahl, national manager-engagement marketing at Toyota, told Buzz.

So far, the tour has traveled to Oakland’s Real Eat and Boston’s Life is Good festivals and will make its way to the Gypsy Picnic Trailer Food Festival in Austin before moving on to Denver, CO, Bloomington, MN, Nashville and other stops. Agency: Filter, Los Angeles.