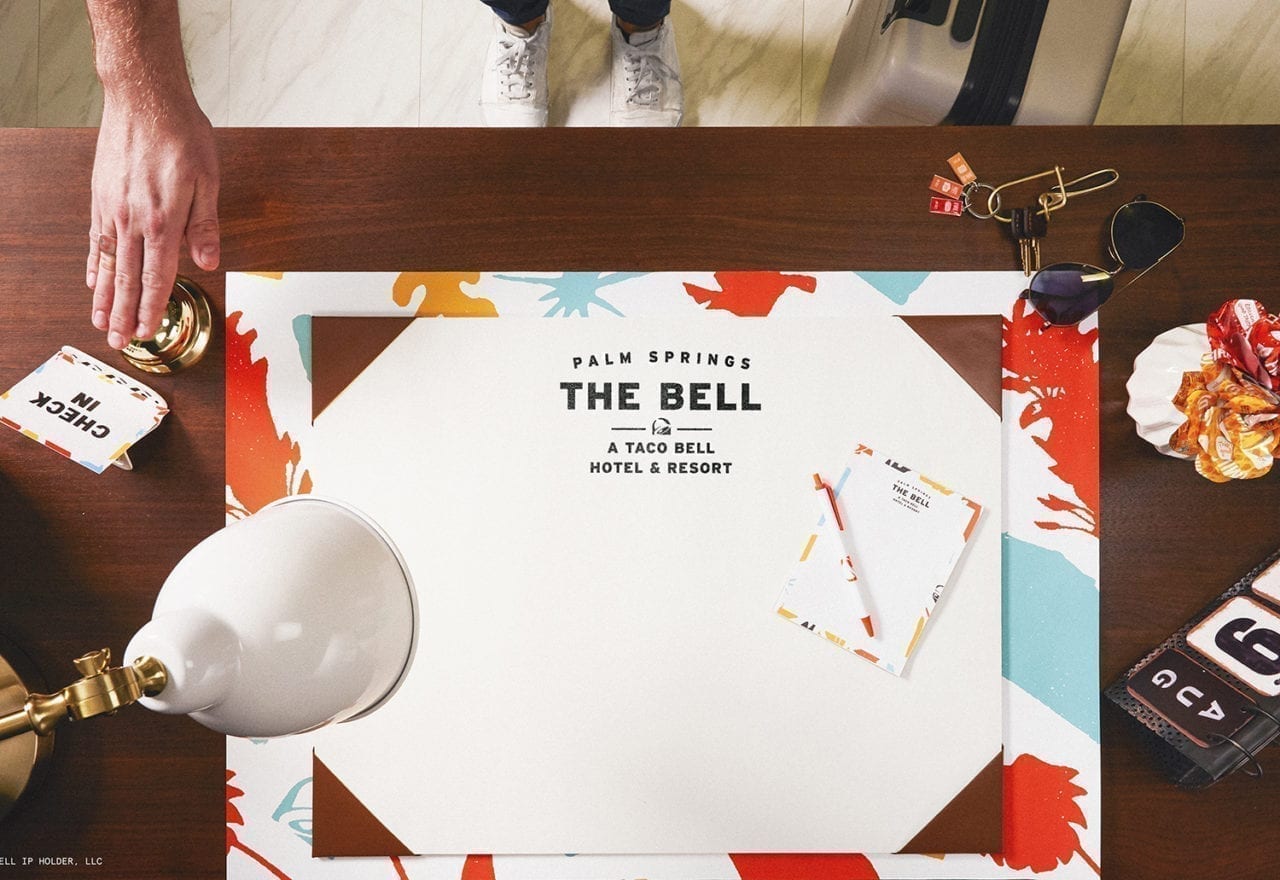 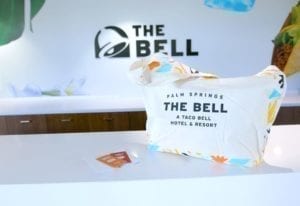 Most Taco Bell fans only spend an average of three minutes and 55 seconds visiting their favorite quick-serve restaurant. But the fandom? Well, that lasts a lifetime for this Yum! Brands-owned chain that’s been serving its Mexican and Tex-Mex-inspired tacos, quesadillas, burritos and oh-my-god-it’s-midnight-and-I’m-so-hungry-gorditas since 1962.

Few brands enjoy the kind of obsessive fan support Taco Bell does. The chain’s loyalists are “superfans” in every sense of the word, willing to get married in a Taco Bell, cover their bodies in Taco Bell tattoos and even plunk down hundreds of dollars on a plane ticket to spend a weekend with other Taco Bell fans. But we’ll get to that in a minute.

Even though Taco Bell is the largest quick-service Mexican restaurant in the world, some of the chain’s competitors still outpace it in market penetration five to one. It’s a sheer numbers problem that the brand has to tackle head-on in order to keep its coveted spot in the hearts of existing fans while cultivating and earning the love of new ones.

This fact has been the catalyst for a series of experiential marketing campaigns that have not only set the brand apart, especially among experience-loving millennials and Gen Z consumers, they’ve become Taco Bell. Indeed, the way some brands market themselves is so fresh and disruptive that the brand itself starts to stand for unconventional thinking—an appealing quality for a lot of consumer demographics who see the brand as a kindred spirit. It’s rarified air occupied by just a few brands (Mountain Dew comes to mind), and Taco Bell stands firmly among them.

For example, there was the “Slide-Thru” window at the bottom of a snow-tubing run in Toronto that celebrated the Cheetos Crunchwrap Slider’s return to Canada. In 2018, the brand activated its collaboration with Forever 21 that put its biggest fans on a runway in downtown L.A. in Taco Bell-branded clothes. And don’t forget the Taco Bell flagship in Las Vegas that opened in 2017 and has since been booked for more than 300 weddings.

It’s hard to say which came first: the crazy, willing-to-do-anything fans, or the over-the-top brand experiences. Taco Bell will tell you that doing things differently is who the brand is—and always has been.

“It wasn’t a decision we made—it came from our founder Glen Bell,” says Jennifer Arnoldt, senior
director, retail engagement + experience at Taco Bell. “Everyone else was making burgers and he decided to open up a taco stand. People didn’t even know how to eat a taco or say taco. So I think inherently it’s in our DNA. By doing the unexpected, and really having creativity at our core, Taco Bell is about disrupting convention and really putting a twist on things.”

Which brings us to this year’s Grand Ex-award winning program, The Bell: A Taco Bell Hotel and Resort—a five-day hotel takeover in Palm Springs that immersed paying—yes, paying—attendees in everything they love about Taco Bell, and then some. From live, poolside performances and movie nights, to build-your-own breakfast room drops, to a salon, a merch shop and all the Taco Bell you could eat, guests got to experience a taste of the Taco Bell they know and love—but with a luxurious twist. The Bell was a fan’s paradise turned social media juggernaut that not only inspired more than 1.2 billion social media impressions, it drove the highest in-restaurant visits for the quarter.

Anyone hungry? Let’s hit the drive-thru, grab a chalupa (extra hot sauce, please) and head back to August 2019 for a tour of… The Bell. 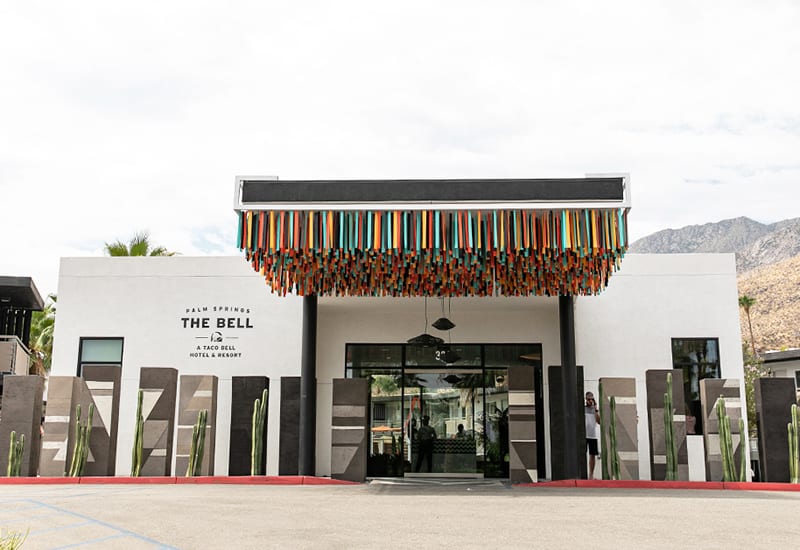 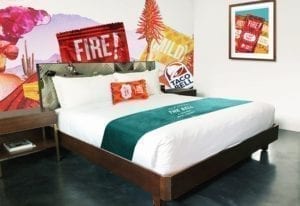 The Bell kicked off in the months before the activation with targeted seeding strategies and a focused p.r. effort. One early email strategy teased The Bell’s concept and asked consumers if they would like to be alerted when the rooms could be booked. More than 80,000 people said “yes.” In June 2019, just a few weeks before reservations went live, the brand released a website loaded with teaser content and architectural renderings of the soon-to-be-open destination.

“That in and of itself could have been a success for a lot of brands, to have a dialog where there are that many people saying, ‘Yes, I want to hear more about everything you’re doing,’” says Gabe Banner, executive producer and project lead at UEG, which, together with Edelman, served as lead agencies on the program.

The Bell was, in fact, a real hotel in Palm Springs formerly known as the V Hotel that the brand took over and retrofitted as a 70-room fully branded “tacoasis.” Rooms started at $169 per night for a standard king and once the rooms were made available on June 27, it took just two minutes for the entire five-day event to sell out. That’s faster than Coachella sells out.

“We didn’t know how it was going to be received, so I think for us the minute that happened we knew we were on to something,” Arnoldt says.

The first wave of hotel guests descended on Palm Springs on Aug. 8, 2019, for what would be a five-day run of The Bell. The hotel’s aesthetic was a thoughtful mix of the brand’s own iconography with cool Palm Springs colors and design references. It would have been easy to go overboard and bonk guests over the head with the typically bold “Taco Bellness” of it all—but it didn’t. The overall effect was chic with just enough color, pattern, graphics and unexpected elements to convey all the luxury a hotel experience should afford while still being a ton of fun. 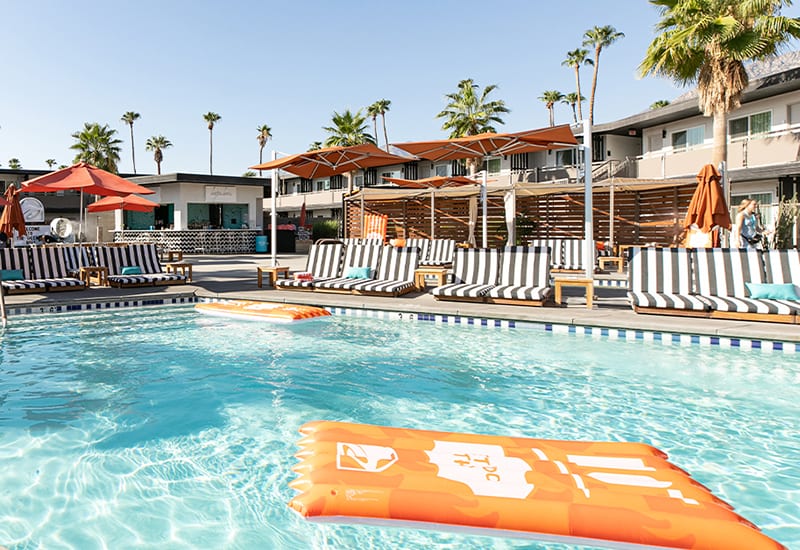 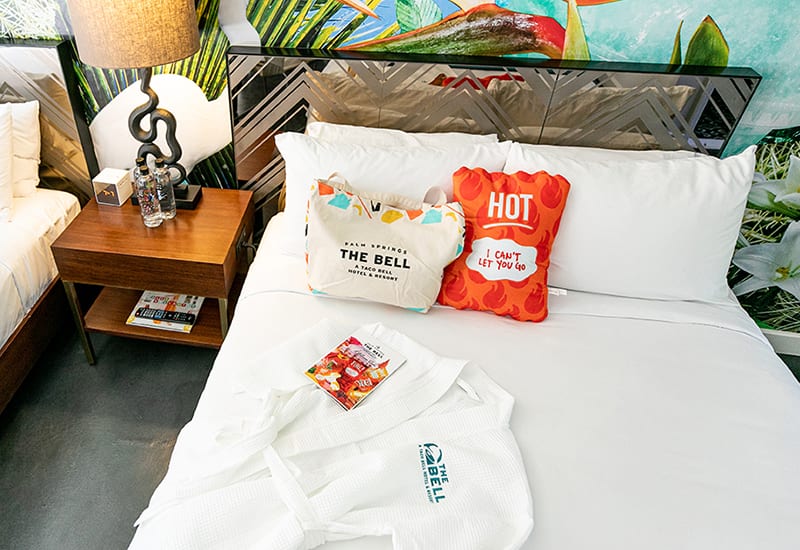 “In the creative process we realized pretty early that we couldn’t half-step anything,” says Banner. “If we were going to do a hospitality experience, we really needed to do it. You can’t let people down—there are expectations you have in a hotel context that you need to live up to and then go beyond.”

The design translated across everything from room numbers to in-room full-bleed collage-style wall patterns to bath amenities. Guests could wrap themselves in custom bedding and bathrobes, send letters home using branded pencils and stationery, and grab a cold one from a mini fridge stocked with free Baja Blast and other Pepsi products. The attention to detail was meticulous and sparked the much anticipated YouTube and Instagram frenzy that ultimately drove millions of social media mentions. 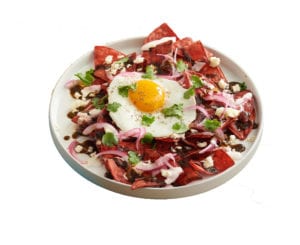 After guests checked in, they were free to experience all the unique daily programming The Bell had to offer. There was a Taco Shop with Taco Bell-inspired resort wear and an on-site salon offering, among the choices, Taco Bell-inspired braids, “Fire Fades” (oh yes, they did) and “Baja Mani” manicures. Surprise and delights included everything from Baja Blast welcome drinks to hot sauce packet inspired-key cards to hot sauce packet pool floats in the Fire! Pool where guests could watch “dive-in” movies and dance to sunset performances by “Feed the Beat” artists including Wallows. The Aqualillies rounded out the special performances with a synchronized swimming show, in Fire Sauce swimsuits, naturally.

“We looked at all of the hotel tropes, and asked ‘How can we do it with the Taco Bell wink?’” Arnoldt says.

And then there was the food. Oh, the glorious food, which included ample menu offerings all day at the poolside Baja Bar, and daily surprise food drops of Taco Bell favorites and unique menu items only available at The Bell, like Toasted Cheddar Clubs, Fire Chip Chilaquiles and Avocado Toast-adas. Every morning, guests could partake in “hot” yoga and enjoy breakfast room service. (Pass the Tums, but seriously, just keep it coming.)

The Bell also welcomed honeymooners who said their “I dos” at the Taco Bell Cantina in Las Vegas on July 19, 2019, and then celebrated their nuptials at The Bell. And one couple even got engaged on the last day of the Bell’s five-day run. 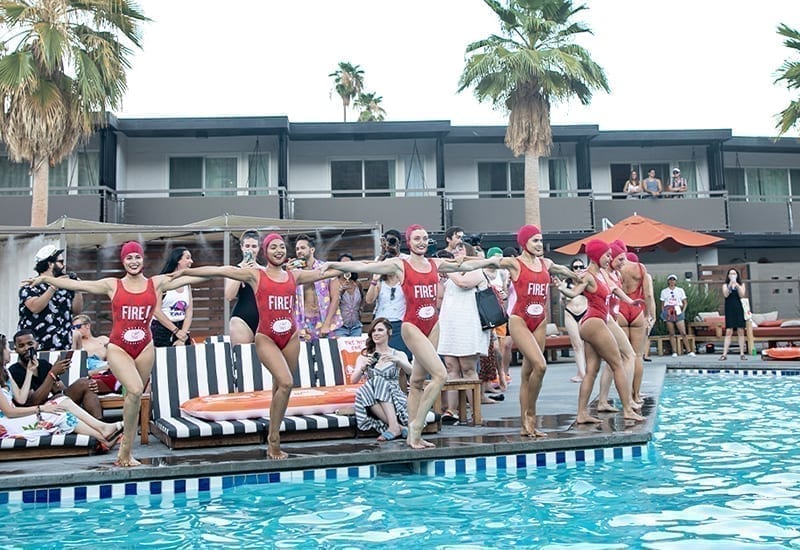 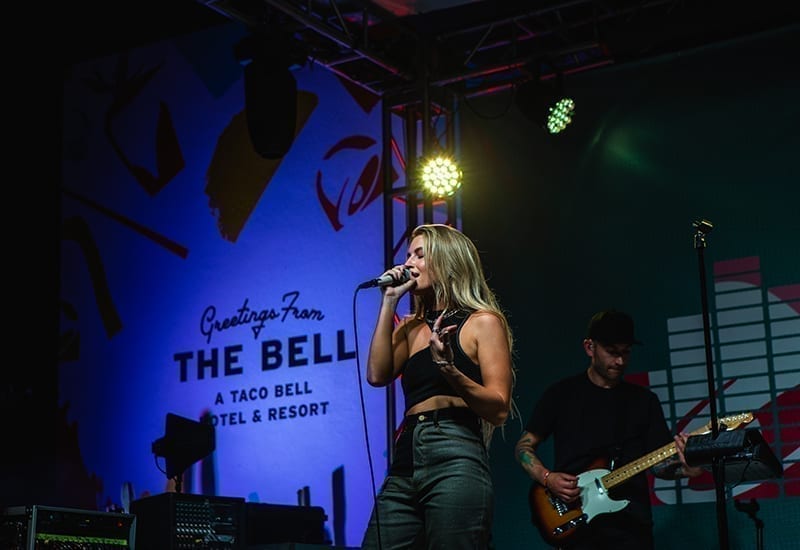 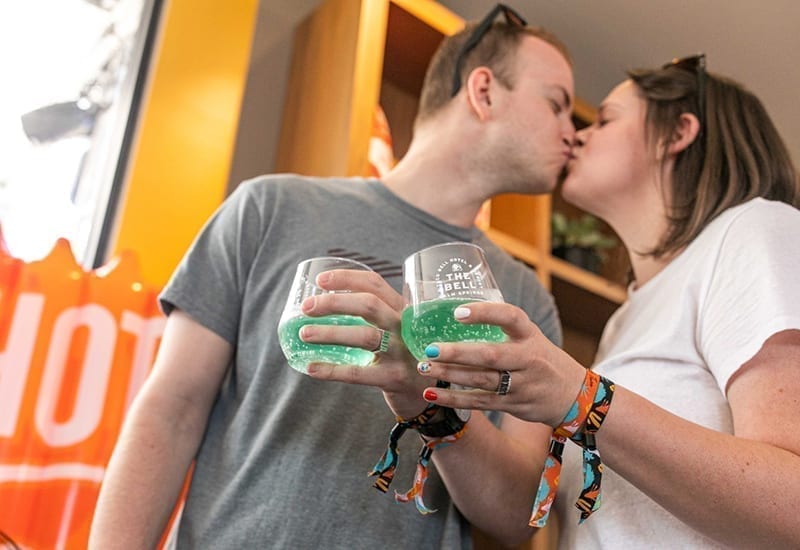 THAT’S A LOT OF TACOS

By the time the last hot sauce pool float had been deflated, 400 lucky fans and 61 top-tier journalists had traveled from 21 states to experience The Bell. With zero paid media dollars, The Bell generated six billion earned media impressions and more than 5,000 media stories—equivalent to 75 percent of Taco Bell’s stories for all of 2018 combined. The program drove more than 1.2 billion social impressions and over 40,000 social mentions. And of course, the whole thing drove those tasty Q3 sales.

Perhaps most importantly, the fans dug it. According to one report, when Taco Bell’s signature “gong” sounded, marking the start of another food drop at the pool, “full-grown adults cheered.” Others said it looked “straight out of heaven… embraces you living out your taco wishes and Gordita dreams.” One YouTube influencer exclaimed, “Four Seasons, we’re burning your robe when we get home, honey!” Indeed, it was Taco Bell’s secret weapon—its crazy, dedicated fans willing to spend hundreds of dollars for a chance to spend a day and night at The Bell—that gave the brand an edge in the franchise wars. And it was an experiential stroke of genius all housed in a quirky, unpredictable fantasy land for fans that enabled them to fly their freak flag high.

And in the end, the brand drove record numbers of fans, both new and old, into restaurants. All thanks to a strategy that took three minutes and 55 seconds and transformed it into a slumber party driven by fans—and tacos. 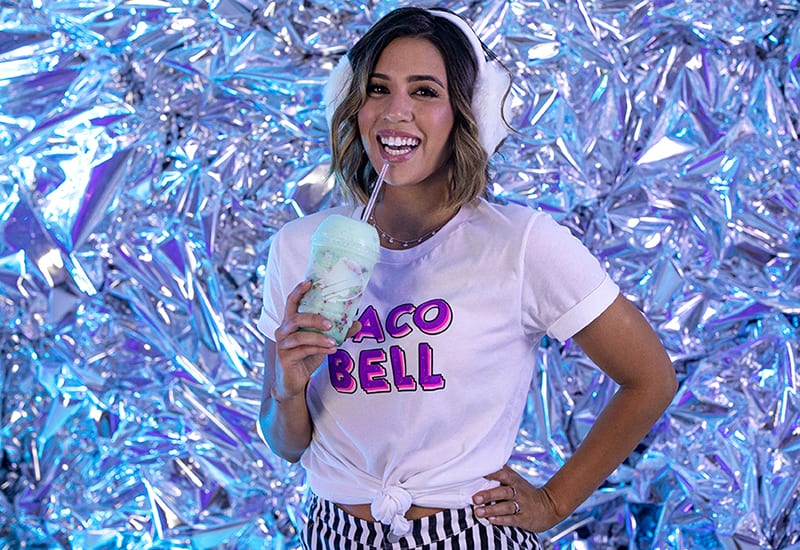 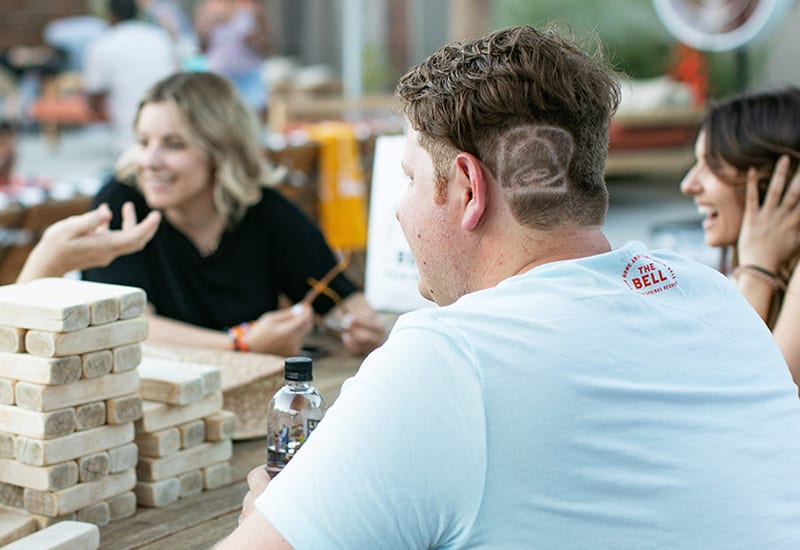